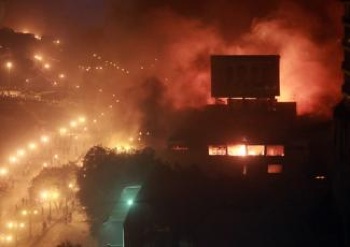 Since the beginning of the Egyptian uprising in January 25th a new grand-narrative about this so-called “revolution” and more broadly the Arab world is being constructed by the media (international and local), academics, politicians, and the local elite.[1] This narrative appears to be replacing the long held “Arab Exceptionalism” narrative, which held sway for decades and argued that Arabs because of sociological and cultural reasons are ‘immune’ to democracy and democratization. While many have criticized this earlier discourse as Orientalist and lacking in analytical rigor, its seamless replacement dubbed the “Arab Awakening,” is being constructed on the very same bases of representation. The fundamental pillars of these Orientalist understandings of Arab societies and individuals are based on: 1) “othering”- ‘they’ (Arabs or Muslims) are different from ‘us’ (Western, specifically European) who are the normative standard; and, 2) romanticization and exotization – this oriental “other” is mystical and mythical. As Edward Said explained years ago, Orientalism is not only confined to “Western” depictions of the Middle East –and particularly Arabs and Muslims- but it is also internalized and propagated by “local” elites. As such in the new grand narrative of “Arab Awakening” both academics and the media (international and local) are appropriating, interpreting, and representing the recent events along the same pillars of othering and, romanticization, while casting universalist-Eurocentic judgments.

In the case of Egypt, the recent uprising is constructed as a youth, non-violent revolution in which social media (especially facebook and twitter) are champions. The underlying message here is that it these “middle-class” educated youth (read: modern) are not “terrorists,” they hold the same values as “us” (the democratic West), and finally use the same tools (facebook and twitter) that “we” invented and use in our daily-lives. They are just like “us” and hence they deserve celebration. These constructions are clear from a quick look the CNN, Time, Vanity Fair and others representations of the so-called leaders or icons of this revolution. They are all middle (upper) class Egyptians under the age of thirty. Most of them have one or more connection to the West, either by virtue of education (Time’s cover feature of seven “youth,” included three students from the American University in Cairo), work (e.g. Wael Ghoneim, sales manager at Google), or training. According to the BBC, Dr Gene Sharp –the author of “Non-Violent Revolution Rulebook” is “the man now credited with the strategy behind the toppling of the Egyptian government” through activists “trained in Sharp’s work.” This same profile of young people similarly monopolized television talk-shows in Egypt. And while many of these individuals did take part in the uprising –in different capacities – their status icons of the “revolution” in when the majority of the Egyptian population and those who participated in the uprising are of the subaltern classes is both disturbing and telling. This majority of people who have never heard of Dr. Sharp or Freedom House, never studied at AUC, or worked for Google. More profoundly, they are antagonistic about “Western” influence and presence in Egypt. Thus the class composition of dissent has been cloaked by a new imaginary homogenous construct called “youth.” In this construct, the media and academic analysts lump together the contradictory and often conflictual interests of ‘yuppies’ (young, urban, professionals of the aforementioned connections and backgrounds) with those of the unemployed, who live under the poverty line in rural areas and slum-areas. Under this banner of “youth” the “yuppies” and upper middle-class young people are portrayed as the quintessential representative of this uprising.

Alongside the icon of the homogenous and palatable for Western consumption youth, is the tailoring and reduction of the values, tools, and tactics of the uprising to fit a ‘Western ‘and ‘local’ upper-middle class audience. In this regard, two features of the uprising are getting paramount emphasis: non-violence and the use of social media. Obama’s speech following Mubarak’s ousting emphasized the non-violence of the uprising quoting the word silmiya (peaceful). The media cameras also focused on the placards bearing the same word. This selective focus on one form of tactic is in-factual. Moreover, it functions as the reverse mirror image of the “terrorist” stereotype hinting of a pernicious fetishization and exotization. There is no doubt that the anti-regime demonstrations were non-violent compared to the state-security use of ammunition. However, by the 28th of January all NDP (National Democratic Party) headquarters and most police stations were set on fire. This was a clear reaction to the state’s systematic violence against subaltern classes, those who bore the brunt of the regime’s daily torture and humiliation precisely because of their position within the neoliberal class matrix in Egypt.  Unlike, the middle-class “facebook” youth, they were not immune to state violence outside the realm of political activism. The exclusion of this part of the story further benefits the narrations of this uprising as a “facebook” middle-class “revolution.”

Such narration is also based on the Orientalist binary of “traditional” versus “modern,” and “East” versus “West,” with the latter categories seen as supreme. Hence, it cannot include the use of molotov hand-bombs, which is “violent-traditional” (read: Oriental) alongside with facebook, which is “peaceful-modern” (read Western). The “educated,” “Western,” and “exposed” cosmopolitan Egyptians who are portrayed as the sole agents of this “revolution” cannot torch police-stations, and those who did –the subaltern- should be and are excluded from the picture.

The active agents of this narration are not only the media and politicians, but academics and international donors’ funding agencies. Over the past weeks, there is hardly a day that passes without a visit to Cairo by a state-official, a donor representative, or an international academic –from Secretary of State Hilary Clinton to political scientist Alfred Stepan and the whole range in between. After paying a pilgrimage to Tahrir Square and scheduling a couple of meetings with the cosmopolitan activists of Cairo, they feel re-assured and entitled to propagate the same story about this so-called “revolution” and its agents. On the other hand, the so-called right steps up to propagate “democratic transition” in Egypt. Unfortunately, these different parties have the financial, moral, and political power for such narration to prevail. Once again we are witnessing the “empire” painting the picture of the “fringe” and within this fringe the subaltern- “the fringe of the fringe”- are being outcast.

[1] For an excellent analysis on why the 25th of January does not mark a revolution, see Assef Bayat.