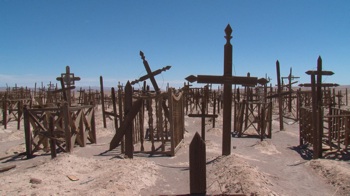 Perhaps Werner Herzog’s Antarctica-set Encounters at the End of the World (2007) is the only recent film that matches Nostalgia for the Light in exploring the unlikely crossroads of scientific and spiritual pursuit in one of our planet’s most remote, barren regions. Whereas Herzog gives a quixotic thrust to global ecological concerns, Patricio Guzmán extends the national historical burden of Chile, which he has documented over the past four decades, into the far reaches of the cosmos.

Nowhere on earth is the soil drier — comparable to the surface of Mars, as Guzmán’s narration in the film details — and the sky more translucent than in the Atacama desert. Consequently, this inhospitable area has long been a research destination for archaeologists and astronomers alike, with both searching for the past in opposite directions. Guzmán dissolves the philosophical paradox between the dimensions of space and time into a question of perception (the cinema’s audiovisual parameters).

Based on his mastery of volume and scale, Nostalgia’s brilliant manipulation of sound perspective dovetails with its multiple trompe l’oeil effects (the blending of the desert’s texture and hue with that of a 10,000-year-old mummy’s skeleton, of celestial bodies’ shapes and surface patterns with those of marbles from the filmmaker’s childhood) to collapse any objective, distance-based separation of present and past. Gaspar, a young astronomer working at the Acatama observatory, even asserts that the present doesn’t exist, except as a state of consciousness — a living memory of the past.

How ironic, then, that life cycles of stars and pre-Colombian rock drawings are of more interest in Chile than its recent history. Miguel, a survivor of the Pinochet regime, was detained in five different concentration camps, managing to measure — without instruments — and memorize the layout of these complexes with enough precision to create stunningly accurate drawings of camp life. Guzmán describes the bond between Miguel and his wife
Anita, who suffers from Alzheimer’s, as a metaphor for Chile’s ambivalent relationship to its past.

The film’s inspiration and prime custodians of remembrance are the handful of women venturing out into the Acatama day after day to scrape the ground with little spades. They are searching for traces of lost relatives who were among the many thousands of Chileans massacred and buried in the desert, then dug up and dumped in undisclosed locations. Even though the establishment disparages their efforts, these women are still determined to exhume their dead and properly mourn them. Seventy-year-old Violeta wishes the observatory’s instruments could look deep into the earth so that she and her companions could thank the stars for recovering their loved ones.

Violeta’s wish finds affirmation, if not fulfillment, when she and her fellow seeker Victoria are invited by Gaspar to marvel at the beauty of the firmament through one of the telescopes. Guzmán tactfully refrains from letting us share their observations and hear their joyous reactions, choosing instead to present the scene as if it were unfolding in an alternate universe.

A work of rare poetic vision and insight, Nostalgia for the Light finds in the Chilean passion for astronomy a potential act of resistance, inspired by the responsibility to bring to light the legacy of the disappeared, who, as Pinochet’s reign of institutionalized terror recedes into an ever more distant past, continue to lie buried under its yoke.

From Allende to Pinochet in Four Films

Few films have been more lived by those making them than the three-part, four-and-a-half-hour The Battle of Chile (1973–1979), a monumental work of journalistic activism and the centerpiece of BAM’s week-long retrospective of Patricio Guzmán’s oeuvre, from April 1 to 7.

Parts One and Two of The Battle of Chile unravel how reactionary forces attempted to sabotage the commitment to nonviolent social reform on the part of President Salvador Allende’s Popular Front government and the Chilean working class during the six months leading up to the military coup d’état of Sept. 11, 1973. Part Three details the workers’ triumphant organization through people’s stores, industrial belts and community commandos to ward off a U.S.-sponsored takeover by the bourgeoisie and the right.

After Guzmán had his reels smuggled out of the country and finished the film in exile, it remained unseen in Chile until he took a print with him to make Chile, Obstinate Memory (1997), which mournfully reconnects survivors to a past that was brutally taken away from them. The Pinochet Case (2001) balances the legal machinations of the attempted prosecution of the ex-dictator on charges of torture with witnesses’ very personal and emotional accounts of pain and loss. With Salvador Allende (2004), Guzmán shatters the silence of censorship that still envelops the life and legacy of a leader whose love affair with the Chilean people was based on making their dream of a just society come true.