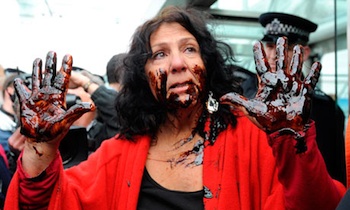 LONDON – BP executives faced angry protesters as shareholders prepared to vote at its annual meeting in London, which is taking place a few days before the first anniversary of the Deepwater Horizon explosion.

Fishermen and women from the Gulf coast affected by the spill, some of whom had bought BP shares to allow them to attend the annual meeting, joined climate change activists and artists protesting against the oil company.

Institutional investors, angry at what they claim are excessive executive pay deals, urged shareholders to vote against the remuneration package.

As BP’s chairman, Carl-Henric Svanberg, described a year of “unprecedented crisis” and remembered the families of the 11 who died in the explosion, protesters spoke of their lost livelihoods.

“I am coming to articulate the anger of thousands of Gulf coast residents whose lives and livelihoods have been destroyed while the BP board continues to prosper,” said Diane Wilson, a fourth-generation fisherwoman from Texas, one of several who bought shares in BP in order to attend the meeting at the ExCeL centre.

She was ejected from the conference centre lobby, having covered her face with a dark syrup intended to resemble oil. “This is the only thing they understand,” she said.

The explosion last April caused a spill that polluted fishing areas and fouled hundreds of miles of beaches. Byron Encalade, president of the Louisiana Oystermen Association, said he planned to tackle the company over its compensation process, claiming many oystermen have been denied payments or given insufficient payouts.

“We’ve not been made whole: our fishing grounds have been depleted, our oysters are dead and we’re not receiving the funds we need to support and sustain ourselves,” Encalade said. “We’re seeing money going everywhere but at ground zero. We’re the communities at ground zero – the first to be put out of work and we’re going to be the last to be able to go back to work and sustain ourselves.”

Tracy Kuhns and Mike Roberts from Grande Isle in Louisiana own a shrimping boat. They have not fished since the spill. They are reluctant to go out when the season starts next month because they are not sure it is safe, even though most of the waters have been declared open.

Kuhns, executive director of Louisiana Bayoukeeper, which works to protect the Gulf habitat, said: “The oil is still there – it’s just sunk to the bottom.”

Roberts added: “Opening the fishing grounds was just a way for BP to limit their liability.”

The couple put in a compensation claim for $100,000 (£60,000), based on typical earnings for a poor season, but received only $6,000 from BP. They worked for BP on its clean-up programme, but that lasted only three months, so money is tight.

Roberts said that even if fishing resumed, “the market is ruined because no one thinks it’s safe. People have common sense.”

BP shareholders have been urged to vote against the company’s remuneration report by Pirc, the corporate governance watchdog, over “excessive” payouts to outgoing executives.

Tony Hayward, BP’s former chief executive, who got £1m compensation for loss of office, has share awards yet to vest worth as much as £8m.

Glass Lewis, a large US shareholder advisory firm, is also urging a vote against BP’s report and accounts.

The Association of British Insurers (ABI), which does not issue voting advice, warned investors of possible concerns about BP’s discretionary use of share-based bonus awards. The ABI has issued an “amber top” alert to fellow institutional investors, warning them to examine the issues surrounding bonuses of more than £100,000 awarded to two of BP’s top executives – its finance director Byron Grote and downstream chief Iain Conn.

Critics view the payments as inappropriate in the wake of the environmentally catastrophic oil spill. BP argues that the executives met targets in their particular roles and that neither played any part in its offshore exploration division.

Melina Laboucan-Massimo, from the Lubicon first nation, said that her father, a hunter, has started to find tumours inside animals he had killed. She blames the use of natural gas by BP in its “in-situ” projects, where steam is used to extract oil from the sands, for polluting the air and water.

Laboucan-Massimo accused BP of not explaining to shareholders the full environmental impact of these projects.

This article was originally published on CommonDreams.org, from The Guardian/UK.