For the past month, a broad coalition of housing, labor, human services and educational groups has occupied the state capitol’s staircases and hallways to show their frustration with Cuomo’s budget cuts and inaction on legislation to protect affordable housing. These mini-Madisons culminated in a capitol camp-out last week, during which 300 people spent the night in the capitol.

Rent regulation laws, which limit the amount of rent that landlords can charge on more than one million apartments in the New York City area, affect more than 2.5 million residents.

“If the rent laws end, as leases expire landlords would not be obligated to offer renewals and could charge as much as they can get away with,” said Jim Lister, a member of Vocal New York.

In addition to renewing rent regulations, advocates, along with key state legislators including Assembly members Hakeem Jeffries and Linda Rosenthal, are also working to repeal vacancy destabilization, a policy that allows landlords to increase tenants’ monthly payments on formerly rent-stabilized apartments once the rent hits $2,000 a month and the apartment is vacant. Tenant advocates began working to repeal vacancy destabilization two years ago, when the Democrats took control of the State Senate, and they’re hoping to achieve this goal by the end of April. As June approaches, tenants will run out of leverage to force a favorable deal on the rent laws. 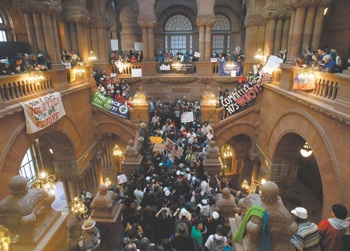 The Community Service Society estimates that 300,000 units of affordable rent-regulated housing have been lost since vacancy destabilization became law in the 1990s. Tenants’ groups also want Cuomo to re-regulate these lost units in addition to renewing the rent laws.

Cuomo’s base, the Committee to Save New York, an astroturf group composed of Wall Street and real estate interests, will certainly push back against rent regulations, especially since they already defeated the millionaire’s tax and backed every penny of budget cuts. The group is running a public relations campaign to build public support for austerity — though tenants counter that it does not cost the state anything to renew and strengthen the rent laws.

The landlord lobby is also urging its Senate Republican allies not to strengthen amendments and to hold out until June to end rent regulation — a frightening prospect for tenants.

Despite the odds, tenant advocates are continuing their efforts to get Cuomo to reconsider.

On a recent day in the capitol, about 50 members of Vocal New York, one of the most boisterous presences in Albany, protested outside of Cuomo’s second floor office.