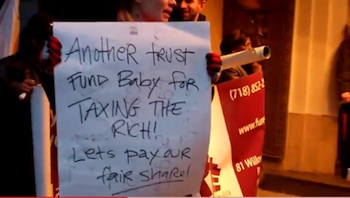 A few weeks ago, outside Midtown Manhattan’s famed Waldorf Astoria Hotel, protesters gathered to rally against Governor Andrew Cuomo’s proposal to cut funding for public services, while also cutting taxes for the wealthy. Organized by New Yorkers Against Budget Cuts, the marchers represented several organizations joining together to “Demand That Millionaires Pay Their Fair Share.”

But amidst the chants of “Not another nickel, not another dime! Bailing out millionaires is a crime!” on March 31 were two protesters holding a very unusual rally sign: “Another trust fund baby for taxing the rich! Let’s pay our fair share!”

It certainly wasn’t the first time trust-funders have made their way up Park Avenue to the prestigious Waldorf Astoria. But it was probably the first time inheritors of wealth have publicly rallied in front of the esteemed hotel for an increase in taxes on themselves.

Who would do such a thing? Why would anyone actively advocate against their own self-interest? “Our current tax system perpetuates inequality,” states Elspeth Gilmore. “Wealthy people can really change that narrative.”

Gilmore is the co-director of Resource Generation, a national nonprofit organization that supports and challenges young, progressive people with wealth to leverage their privilege and resources for social change.

But within the nonprofit and social justice communities, being wealthy is not the easiest label to identify with. “You hold up the sign first,” Gilmore tried to persuade her co-conspirator Jessie Spector, Resource Generation’s National Organizer, as the two of them joined the rally at the Waldorf, wondering if they “were really about to publicly declare themselves Trust Fund Babies.”

Ultimately, they felt they had to. “As a block,” Gilmore states, “the issue of unfair taxes is a key place where wealthy people can really speak out.”

By employing the charged term “trust fund baby” the affluent activists created a potentially uncomfortable situation for themselves. But they believed doing so allowed their presence at the rally to be as effective as possible. “Wealthy people probably take some of the least risks,” Gilmore admits, noting that, in the end, they were holding a sign, not risking food or shelter or economic security.

“We got some thumbs up from a handful of protesters, but most of them couldn’t see the sign,” she continues, noting that their presence at the protest, as well as in the entire social justice movement, “could lead to amazing conversations.”

For the past 13 years, mostly from behind the scenes, Resource Generation has worked with about 1,500 young affluent adults through conferences, workshops and in various philanthropic settings.

But now they are preparing to engage in public activism on an organizational level. “It’s a powerful message within the labor movement,” suggests Gilmore, “when wealthy folks are aligned.”

Resource Generation recently teamed up with another nonprofit that organizes affluent activists, Wealth for the Common Good, to form a Progressive Tax Campaign. They will be organizing and advocating a change in the policy, laws and perceptions of our tax system. Specifically, the campaign aims to draw attention to the social services that taxing the wealthy could fund, and advocates higher tax bracket rates for top income earners, as well as higher taxes on investment income.

It’s a concentration Resource Generation thinks could have a big impact, even if it focuses on the mundane world of taxes. “It’s definitely not sexy,” Gilmore admits. “There’s a lot of myths around it, and it takes education and time to understand. But it gets right to the root of inequality and wealth disparity.”

Additionally, various chapters are working on specific campaigns that address particular issues pertaining to the political climates of the country’s various regions, such as immigrant rights in Arizona, and budget cuts in New York.

But much of Resource Generation’s work will continue to focus on supporting and challenging young, progressive, affluent individuals. “You have to be okay with who you are,” urges Gilmore. “You have to bring your full self to your local work.”

It’s a task to which those at Resource Generation have dedicated thousands of hours over the years. “What makes us effective is the personal work done within our community that supports and challenges us,” suggests Gilmore. Like Resource Generation as a whole, she continues to ask, “What is the best role for wealthy people to play as a group in this political moment?”

The answer to that question will certainly be revised over and over again as the political climate changes and activist campaigns continue. But embracing one’s wealthy identity to speak out against in America’s unfair distribution of wealth by holding a sign that reads “Another trust fund baby for taxing the rich” would seem to be a good step. And one that the whole economic justice movement can build upon.