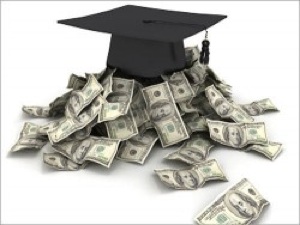 A college education has long been viewed as a wise investment, but nowadays it’s coming at a high cost. Last year marked a dubious milestone: student loan debt outpaced credit card debt in this country for the first time, and recent reports suggest the gap may widen this year as more students continue borrowing to finance their education.

Consumers owe $828 billion in credit card debt, and students topped that with $850 billion in outstanding loans, according to data from Mark Kantrowitz of FinAid.org and FastWeb.org, a website that publishes information about student aid.

Despite the intrinsic value of pursuing intellectual endeavors, institutions of higher learning are becoming less and less affordable. The New York Times reported last week that student loans may top a trillion dollars this year, and others have questioned whether education is the next “bubble” in a country still reeling from the housing bust.

Student debt has continued to grow. In 2008, two-thirds of students who earned a bachelor’s degree from a four-year college finished school with some debt. The average debt for graduating seniors was $23,186, according to FinAid.org. Last year, the average was $24,000 according to the Times. And FinAid.org data shows it’s even worse for graduate and professional students with debts ranging from $30,000 to as high as $120,000.

College has become costly for a number of reasons. Tuition has outpaced inflation. States are also facing budget cuts, and endowments have also declined. And more families have endured financial difficulties from the recession, causing students to borrow more.

Federal grant aid and tax credits have helped to mitigate some debt, especially for low-income individuals. But government aid programs have increasingly been the subject of cutbacks. Pell Grants, for instance, were preserved in the recent bipartisan agreement, allowing aid with a maximum award of $5,550 for the 2011-12 school year. But fiscal year 2012 still faces the threat of proposals to cut or eliminate the need-based grants and would affect more than nine million students.

The soaring amount has made it difficult for students to repay their loans. The Institute For Higher Education Policy, a nonprofit policy and research group, studied student borrowers from 2004 to 2009, with an emphasis on 2005. The findings, published this past March, showed that 41 percent of individuals who took on student loans either defaulted or made delinquent payments. Those who didn’t finish school also faced negative consequences, and more than half of borrowers who attended for-profit and public two-year institutions made late payments or simply defaulted.

That’s not to say that an education is not worth money. Research shows that a four-year college graduate will earn relatively more in the long term than those with a high school education.

But as Judith Scott-Clayton, an assistant professor at the Teachers College of Columbia University points out, most undergraduates will find it difficult to pay back their loans once they graduate. Starting salaries for entry level jobs typically fall below the median annual earnings for full-time workers with college degrees. She writes:

For those who do worse, the debt may be particularly burdensome. And it is not easy for students (or even economists) to predict what the economy will be like several years from now, or how any individual will fare in it.

So while it may be an excellent investment on average, there is a real risk that some graduates with $24,000 of debt will face unmanageable monthly payments particularly in the early years of their careers.

Like many families who faced insurmountable debt from housing, a lot of young people are also facing their own economic crisis.The so-called Millennial generation (18-29 year-olds) is on pace to become the most educated generation thus far, but this age group has also been hit hard by the recession. Graduating with enormous debts can also cause young people to delay traditional milestones, from starting a family, to owning a home.

In order to create more financially responsible students, places like Tidewater Community College now require their pupils to outline their budgets before and after graduation. The Institute for College Access & Success, a nonprofit group, has also argued for preserving need-based aid and improving consumer protections, especially for private loans.