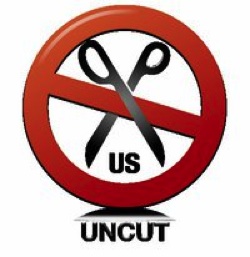 By Monday April 18th most Americans will have finished filing their taxes, helping to boost government revenue at a time when the only thing most politicians care to discuss is how to cut the deficit.

But a large pack of corporate citizens will probably not be worrying about paying their dues; tax day, like any other day for them, will be strictly devoted to growing their bloated profit margins.

Recent reporting that some of the largest U.S. corporations have paid little to nothing in federal income taxes in the past few years hasn’t stopped the upside-down debate in Washington. The beltway budget battle remains focused on one blunt question: how much of a beating should be given to workers and the poor in order to bring down the deficit while leaving the corporate bottom line unscathed?

Beyond Capitol Hill, however, the scope of corporate tax-dodging during a period of devastating budget cuts has inspired the ire of thousands of Americans and given birth to a new people-powered movement to hold big business and their mouthpieces in Washington accountable for the cuts. It’s called US Uncut, a campaign that has produced hundreds of direct actions targeting notorious tax cheats like Bank of America and Verizon while agitating around other major offenders like General Electric and Citigroup.

Thanks to tax breaks, creative accounting schemes, loopholes and off-shore havens, these companies are raking in billions and getting away with systematic tax-evading operations that would land ordinary people in jail.

How did they get away with it? Bank of America has 115 foreign tax-havens where it keeps its income in order to avoid taxes. And Bank of America is not alone. Roughly 25 percent of the largest U.S. corporations don’t pay any federal income taxes.

US Uncut has adopted a model of organizing first used in the U.K. where an organization called UK Uncut has been using hundreds of creatively-themed, non-violent direct actions targeting companies that flout their duty to pay taxes while budget crises are crippling social programs. The “flash mob”-style actions are meant to both pressure companies and galvanize the broader population through attention-grabbing and highly publicized direct actions.

According to its website, “US Uncut is a grassroots movement taking direct action against corporate tax cheats and unnecessary and unfair public service cuts across the U.S. Washington’s proposed budget for the coming year sends a clear message: The wrath of budget cuts will fall upon the shoulders of hard-working Americans. That’s unacceptable.”

The approach taken by US Uncut relies heavily on the use of social media and a decentralized, do-it-yourself system for organizing protest actions and posting them on its website.

George Taghi, a leading organizer with US Uncut in Washington DC, explained that US Uncut wants to change the public discourse around the budget and the deficit and engage the public with its approach to activism.

“US Uncut’s goal is to punctuate and change the narrative that says ‘we have a spending problem’ to ‘we have a revenue problem,’” Taghi says.

When asked why US Uncut is focused on tax-dodging companies rather than the lawmakers who enable them, Taghi pointed to the corporations as the real source of power in Washington:

“US Uncut has focused on bringing protests to companies’ storefronts, instead of lawmakers, because that is where the true powers lie. On the whole, for companies to claim ignorance or deny responsibility for our lopsided tax code – that legalizes off-shoring of profits and accounting gimmicks – is a farce.  These companies have lobbied Congress for such privileges and donate to representatives to enact loopholes.”

In addition to Bank of American, US Uncut is shining the spotlight on other corporations like Verizon, which reported a pre-tax income of $24.2 billion last year and was rewarded with a $1.3 billion tax refund. Citigroup has paid zero dollars in taxes in the last four years, according to US Uncut. The company also was the largest recipient of government bailout money, totaling a staggering $476 billion.

The issue of corporate tax-dodging has been pushed into the limelight in recent months. Last month, Vermont Senator Bernie Sanders compiled a list of “the 10 worst corporate income tax avoiders.” The list included companies such as those on the US Uncut target list, in addition to Exxon Mobile, which made $19 billion in profits in 2009, paid no federal income taxes and received a $156 million tax rebate, according to SEC filings. While the official corporate tax rate is 35 percent, Goldman Sachs managed to whittle its tax obligations down to 1.1 percent of its income in 2008.

In March, the New York Times published a front-page article describing how General Electric, the second largest corporation in the world, paid nothing in federal income taxes last year while it reported $14.2 billion in profits. On top of that, GE claimed a tax benefit of $3.2 billion.

“Its extraordinary success,” according to the Times article, “is based on an aggressive strategy that mixes fierce lobbying for tax breaks and innovative accounting that enables it to concentrate its profits offshore.”

Add to all of this GE’s anti-worker policies – which include plant closures that have eliminated a fifth of GE jobs in the U.S. since 2002 and the company’s drive to cut the wages and benefits of its mostly unionized workforce – and you have what President Obama lauds as a “model” for American business.

On Wednesday that model was the target of a hoax executed by the same activists of US Uncut, in partnership with the “Yes Men,” an anti-corporate group notorious for pulling pranks that parody corporate propaganda. The two groups put out a fake GE press release that announced GE’s plans to return all of its $3.2 billion tax refund in response to public outrage. The stunt brilliantly put GE into an awkward public relations situation in which the company was forced to openly admit that it in fact had no intention of paying anything back.

Given GE’s relationship with the White House, the egregiousness of its tax-dodging helps to contextualize the willingness of the Obama administration to inflict such harsh cuts like the ones that went through Congress last week to avert a government shutdown. Instead of being sanctioned for its tax cheating, GE’s CEO, Jeffrey Immelt, was awarded a top position in the Obama administration as chair of the president’s Council on Jobs and Competitiveness.

So when it comes to spending and budget cuts, forget hope and change. Compromise and capitulation is the catchphrase of this administration, and this should surprise no one who knows the company that Obama keeps. In fact, the president’s “compromise” last week with Republican House Speaker John Boehner cannot even be called that. Democrats and the White House conceded even more in spending cuts than what Republicans themselves originally proposed at the beginning of the year. And it was a “compromise” that Obama applauded as the largest annual spending cut in U.S. history.

On Wednesday Obama delivered a speech in which he seemed to be changing course and finally turning back to the progressive ideals that inspired millions during his campaign. His argument for progressive tax policies, making the wealthy pay more and preserving critical programs like Medicare and Social Security was a rhetorical departure from what we’ve seen from his administration over the past several months of budget wrangling.

Following the speech, liberal commentators voiced their exuberance and suggested that Obama’s disillusioned base can again find some cause for excitement. Others were not as impressed.

“[Obama] has given so many great speeches before, only to disappoint. Unfortunately, he stills adheres to the right’s narrative that spending cuts on domestic programs has to happen to the tune of nearly $1 trillion over ten years,” said Taghi from US Uncut.

The speech also left the door open to unspecified reforms to Social Security and Medicare that will play into the hands of the right-wing tea party-backed Republicans in Congress who want to privatize and destroy those programs.

Last week Congress voted to chop $38 billion dollars from the budget with cuts that will affect health programs, heating assistance to the poor, education programs, the Environmental Protection Agency, and food safety. Funding for essential women’s health services provided by Planned Parenthood just barely made it passed the GOP’s ideological chopping block, but Obama and the Democrats still traded away money for those services for residents of the District of Columbia.

And while the let-them-eat-cake budget cutters are using the deficit to justify these cuts at the federal level, they have also been on the attack at the state level where budgets are being slashed and unions are under assault.

The campaign against unions has helped breathe some life back into the labor movement. But what started as an anti-union crusade in Wisconsin – inspired and funded by the right-wing billionaire Koch brothers – has spread to other states, and it’s not just Republicans who are out to make union workers scapegoats for the deficit. Democratic governors in California, New York, and Illinois are using the deficit as an excuse to force major concessions from public sector unions.

In response, unions and labor activists have been mobilizing and fighting back. A national day of action last week on April 4th saw over a thousand union rallies and other actions for labor across the country.

In the midst of this labor upsurge, US Uncut is another component of the progressive fightback, and it’s a campaign that goes directly to the corporate tax-dodgers who are materially and ideologically feeding the narrative about a deficit crisis that can only be solved through budget cuts. A unified progressive fightback – including labor, environmentalist and consumer rights groups – is needed in order to push back against austerity and fight to rebuild the tattered social safety net that Washington is poised to shred altogether.

The right yearns for capitalism unfettered, and to get there they are relying on a structure in Washington that can only be described as plutocracy. And neither party is willing to consider serious cuts to the massive Pentagon budget. Unpopular wars abroad and unpopular tax cuts at home for the wealthy are all evidently worth the resultant suffering inflicted on millions here in the U.S. under the budget ax.

In Wisconsin and other states where workers have been fighting back, an important example has been set. This class war no longer needs to be asymmetrical. Working people can and must fight back, not just against the budget cutters in Washington, but against their corporate paymasters whose anti-worker and tax-dodging practices have helped set the stage for ruthless austerity.

We simply cannot defeat the high-powered corporate lobbyists on their own turf. If ever there was a time for progressives and the left to abandon the tired and feeble strategies of lobbying, letter-writing, and petition-signing, that time is now. We need to exert pressure where it will be felt – on the streets and in the workplace through mass mobilizations, strikes, and yes, militant direct actions.

US Uncut called for national days of action on “Tax Weekend,” April 15th to the 17th, and on Friday there were over 130 actions across the country posted on its website through tax day.

It’s time to go directly after the corporate powers using creative direct action and other forms of protest to expose their dirty war against workers and the poor.

Brian Tierney is a freelance labor journalist in Washington, D.C.