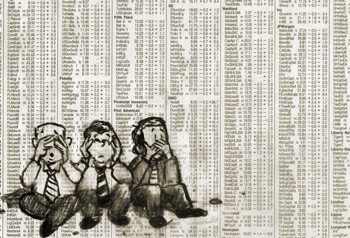 Those who talk the loudest about freedom are often the ones most inclined to place people behind bars. In The Illusion of Free Markets, University of Chicago Professor Bernard Harcourt attempts a genealogy of the seemingly paradoxical coupling of the discourse of free markets and the practice of mass incarceration in the contemporary United States.

Although The Illusion of Free Markets is primarily a work of intellectual history, Harcourt starts from his interest in how the ideological fiction of the “free market” helps produce contemporary U.S. mass incarceration. He posits that the key to understanding what he calls “neoliberal penality” is that maintaining “law and order” has become one of the only acceptable forms of state intervention. Even those who decry the “distortions” of the marketplace caused by government interventions such as minimum-wage or rent-control laws support state involvement in policing the populace. While the marketplace is thought of as naturally self-ordering, in the realm of punishment, order must be imposed. Thus, looting in Iraq became an example of the messiness of freedom—in Donald Rumsfeld’s famous phrase — while “broken windows” are not to be tolerated.

Harcourt traces the root of this conception back beyond economists Milton Friedman and Gary Becker to figures such as Jeremy Bentham, Cesare Beccaria and the Physiocrats. Along the way, he carries out case studies of the Chicago Board of Trade and the grain trade in Paris prior to the French Revolution. Harcourt demonstrates that once you pierce the rhetoric of “free markets,” the Chicago Board of Trade consists of regulation all the way down. On the other hand, he shows that the Parisian grain markets, often held up as examples of state hyper-regulation, were largely self-regulated and seen by many contemporaries as freedom-enhancing.

Harcourt convincingly argues that not only is there no such thing as a free market, but in fact the discourse of free markets blinds us to the real political choices we face. Governments are always intervening in markets in one way or another, making decisions that determine the distribution of resources. They are faced with an endless set of choices between the interests of debtors and creditors, renters and owners, taxpayers and banks, and so on. By buying into the rhetoric of self-regulating markets, we naturalize the choices made by the powerful under the cover of the “invisible hand” of the marketplace.

While The Illusion of Free Markets is fascinating and incisive, it is unfortunately limited in scope. Tracing the intellectual pedigree of neoliberal penality is no mean task, but the more interesting question is how the ideological fiction of markets as a naturally ordered, self-regulating sphere of freedom came to be adopted as conventional wisdom by both elites and the masses. It is notable that even those getting their pockets picked by the invisible hand often consider a belief in free markets to be simply common sense.

The left has a knack for ending up on the weak side of sound-bite battles. “Pro-choice” doesn’t sound as good as “pro-life,” while “fair trade” isn’t as appealing as “free trade.” No one seems to even have a good two-word alternative to “free markets.” But the important question is: freedom for whom to do what? In The Illusion of Free Markets, Harcourt does the essential work of bringing this issue to the fore.