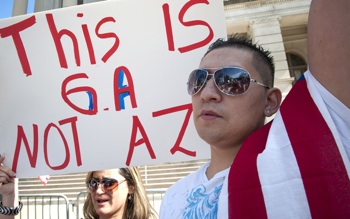 The Georgia Legislature last night approved a bill that empowers local police to check the immigration status of any suspect, even those stopped for alleged traffic violations. The final vote in the House came just two hours before the close of the legislative session. The bill, which closely resembles Arizona’s embattled SB 1070, is the first copycat bill to pass through another state legislature. It will now be sent to the Governor Nathan Deal’s desk for signature.

The 11th hour vote came amid mounting pressure from a diverse coalition to kill the bill. In the two weeks leading up the vote, Georgia immigrant rights advocates and civil rights groups collected 23,000 signatures opposing the legislation. Protesters rallied in at the capitol in Atlanta this week with signs reading, “RIP Dr. Kings Dream” and “RIP Georgia Economy.” Business groups, fearing the truth of the later, joined the opposition, forcefully rejecting the requirement that employers implement the E-Verify program to check the immigration status of all employees.

Yet, despite the broad opposition, conservative state legislators ended the week with a victory.

“It’s a great day for Georgia,” Rep. Matt Ramsey, the Republican who authored the bill told the Atlanta Journal Constitution. “We think we have done our job that our constituents asked us to do to address the costs and the social consequences that have been visited upon our state by the federal government’s failure to secure our nation’s borders.”

However, Ramsey’s enthusiasm may be short since the bill will now face significant challenges. Gov. Deal has 40 days to sign the bill into law and he has expressed some reticence recently about the potential costs of the law.

“All eyes on the governor,” Azadeh Shahshahani, of the Georgia ACLU told Colorlines.com. “We do hope that the Governor will veto the bill. Obviously from our perspective the bill has serious concerns. This bill makes the whole state ‘show me your’ papers territory.”

Most expect Gov. Deal to sign the bill into law, and as soon as that happens, Georgia will almost certainly face legal challenges. On Monday of this week, the U.S. 9th Circuit Court of Appeals upheld a lower courts ruling that struck down the most controversial parts of Arizona’s SB 1070 that require local police to check the immigration status of anyone they suspect may be undocumented. That suit is now making its way to the Supreme Court. In Georgia, legal advocates are likely to seek an injunction in court to the bill from taking effect until it’s constitutionality can be determined.

The bill’s drafters say it was carefully crafted to avoid such legal challenge. Indeed, Georgia’s bill differs from the one in Arizona. Unlike the Arizona bill, the Georgia bill does not outright require police to check suspect’s immigration status but, rather, authorizes them to do so. Its proponents hope that this will be enough to protect it in the courts. Like the Arizona law, Georgia’s bill makes it a state crime to be present on state soil without proof of lawful status.

Many worry about the financial costs of the bill. Though these are surely not the greatest concerns for immigrant communities who would be most impacted if Georgia’s bill is enacted, many business groups are anxious. A national boycott of Arizona cost the state an estimated $250 million in lost taxes, tourism and other revenue, according to the Center for American Progress.

Even before the Georgia bill passed, a group of organizations across the country threatened to wage a boycott of the state of Georgia if it enacts the legislation.

Immigrant and civil rights advocates say the bill will spur increased racial profiling. And, says Shahshahani, this is on top of a climate in which state of Georgia already let’s racial profiling flourish.

“People of color are already being profiled across the state. Georgia does not have racial profiling laws on the books. There is no uniform system for data collection when it comes to traffic stops and there are no oversight mechanisms in place at the state level to prevent racial profiling. This bill is only going to worsen a bad situations.”

At least four Georgia counties currently empower local police to enforce federal immigration laws through the federal 287g program which makes cops into immigration agents. That program has for years been criticized for facilitating racial profiling.

Even if the law is rejected in a legal suit, it is sure to hurt immigrant communities. After Arizona’s law passed, and even since the courts blocked key portions of it, many in Arizona were fearful about how police and other institutions would be required to act vis-à-vis immigrants. The director of a Phoenix shelter for survivors of domestic violence told Colorlines.com earlier this year that in the period after SB 1070 passed, shelters saw a steady decline of women seeking help. The director attributed this to a growing fear among undocumented women about abusers ability to report victims to police and about whether state funded entities like shelters would turn undocumented women away.

Georgia now becomes the first state to pass a bill that closely resembles the one in Arizona. Similar bills have been introduced in at least 24 other states since SB 1070 passed last year. The majority have has been killed or have failed to move.

This failure is despite a well-organized and well-funded strategy to move more such bills across the country. Those efforts, as NPR reported last year, have involved a national network of state legislators and private enterprise, including private prison and immigrant detention companies with clear interests in increasing the number of immigrant detainees.

All eyes now move to a handful of other states where similar bills may still pass. The Alabama House passed an SB 1070-like bill last week and bills have been approved by one house of the South Carolina, Oklahoma and Indiana state legislatures as well.