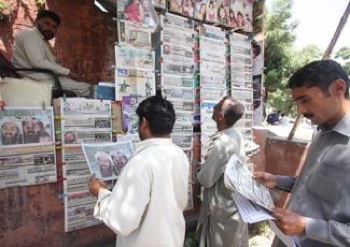 There is a nervous tension in the air in Peshawar after the killing of Osama bin Laden. Over the past couple of days, people are holding their breath. Waiting. Waiting to see what will happen next. Rumors are rampant. It almost feels as if death is right now looming above people’s heads. Death, people feel, is waiting to strike Peshawar, waiting to strike Pakistan, yet again. We hope not. We pray not. Yet everyone here feels that things are about to get worse, yet again.

Questions are being raised in the United States over Pakistan’s role and responsibility in harboring Osama bin Laden. Although there have been some efforts to show that Pakistan did not know that Osama bin Laden was hiding in the country, and in Abbottabad of all places, the theme that seems to be booming, loud and clear is, “How will America respond?” One could add, as the local sentiment seems to show, “How should America respond to Pakistan’s betrayal?” This question is creating a nauseating feeling in the pits of people’s stomachs here in Peshawar, and indeed in across Pakistan.

The majority of Pakistanis are skeptical of the reported circumstances in the death of Osama bin Laden. The fact that he is said to have been residing in Abbottabad, which, as people have noted, is home to the equivalent of Sandhurst or West Point, is one factor. Abbotabad is not like Karachi, New York, or London, where it is easy to remain anonymous. In places like Abbottabad, people talk to each other, and talk about each other. Families, business people, shop keepers, garbage collectors and taxi drivers – they know each other’s business. The other day, a friend in Peshawar told me some details about my neighbor: when he bought his house (it is a nice house), where some of his family hails from, and so on. My friend did not know my neighbor personally, but nice houses and new faces attract attention. And as people say, “Here, people like to talk.”  If this is the case in Peshawar, a city four or five times the population of Abbottabad, people are questioning the plausibility of bin Laden living for years undetected.

“My brother has a house in Abbottabad. Quite close to where all of this business is taking place. How is it possible that he was staying there all this time? In Abbotabad? Of all places, Abbottabad? Really?”

– Male government worker, 48. (All of the quotes were elicited from people in Peshawar on May 3.)

“I almost feel as if America has forgotten how to tell good lies. If they had said he was hiding in the Tribal Areas, or a big city, like Karachi… then maybe it would be believable. But who knows what is going on? Who knows why Abbottabad? Either way, if he was in Abbottabad, the fact that it is not in the usual “outlawed” lands of FATA that they (the US) can potentially justify more (American) military action deeper into Pakistan.”

“They threw his body into the sea. Why? What was the need for that? It doesn’t add up. We’re not being told the whole truth, and that’s not unusual.”

One thing many Pakistanis are certain of is that the military action in Abbottabad by US forces signals an intensification pressure on Pakistan. “What to do with a problem like Pakistan” is an old question that has acquired new relevance. Within a few hours of the killing, Hamid Karzai had issued an “I told you so” response; and India is using this opportunity to justify its criticism of Pakistan (and will surely use this to justify future military action in Kashmir).

The fact that the US was able to carry this action out without Pakistani knowledge, let alone involvement has further elevated Pakistani distrust in their government and military – which, in recent years, has never been that strong. The government’s response to the killing of bin Laden has been characteristically slow. The lack of responsibility by Pakistani officials is heightening people’s distrustful anxieties. For example, a common casual conversational topic in Peshawar is the idea that over 30 to 40 percent of national and international aid agencies are infiltrated, or working with some intelligence service or the other. Playing “spot the agent” sometimes seems like a local pastime; people size up strangers, and sometimes locals, to figure out or guess who belongs to which agency – Pakistani, America, British, and so on. What people do know, and what recent history shows, is that they will be caught in the crossfire of America’s response to the realization that Pakistan was bin Laden’s harbor for years. “It’s just a matter of time,” as one person told me today.

While people in Washington, New York and across the US were celebrating, dancing, and chanting “USA! USA!” for the long-awaited vengeance for the 3,000 deaths of the 9/11 terrorist attacks, people across Pakistan are mindful that over the last seven years the number of Pakistanis killed is 34,017.  In 2010, over 900 Pakistanis were killed in US drone attacks, which were also supported by their own government and military. Less than two weeks ago, over twenty-five people were killed in North Waziristan, in one drone attack and the month before forty civilians were killed in another drone attack. Beyond the casualties, there are hundreds of thousands of displaced Afghans and Pakistanis who cannot return home. There are countless maimed amputees, whose disfigurement is a commonplace feature of the landscape in Peshawar.

In my research on the impact of the conflict in Pakistan, I met a man whose body had been scarred so violently and disgustingly in one of the many bombings in Peshawar since 2001. I met an Afghan child living in a refugee camp whose face was mutilated as a result of a bomb. A 15-year-old boy and his 12-year-old brother migrated, without their parents, to Pakistan after 2001; both of them attend school and work every day until midnight, struggling to make ends meet. Each time I meet them, both seem to have lost more weight.

The war in and against Pakistan has transformed the country. Checkpoints, bomb blasts, identity cards, paranoia, detentions, and drone attacks are all daily realities, features of the landscape. As Mohsin Hamid summed up, “America’s 9/11 has given way to Pakistan’s 24-7-365.”

Maybe this nervous anticipation that some horrible retaliation will be Pakistan’s fate will hold false. Perhaps instead of an expanding and intensifying war, there will be a withdrawal from Afghanistan. Perhaps the Pakistani state will start acting more responsibly for the well being and security of its populace. Perhaps we won’t see repeat scenes of bombings across Pakistani cities. While we can hope, recent history tells us another story.