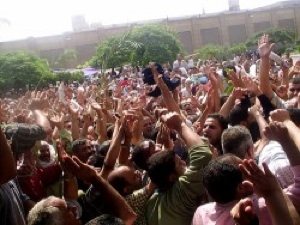 From the military crackdown in Libya to the assassination of Osama Bin Laden, the events of the past week shook up the so-called Muslim world. And they sadly overshadowed a bigger story unfolding in the region, one with far more resonance than boilerplate narratives of counterterrorism and never-ending conflict. Interspersed with the bombast of gun battles was the steady rhythm of May Day amidst the “Arab Spring.”

As the weather warms, the Western media lens has drifted onto hotter and bloodier clashes in the Middle East and North Africa. But the May Day protests in Cairo revealed that the coalescence of labor and human rights are at the crux of the unfolding revolution and continues to serve as a barometer for monitoring the progress, or precariousness, of the transition to democracy.

It was the first free May Day celebration in Egypt in generations. As such, it embodied the postcolonial struggle for dignity and freedom more than any of the battles raging today in Muslim countries.

A few weeks ago, Egypt’s transitional authorities struck a blow against the labor movement and all activists, with legislation that would make it a crime, punishable by fine or imprisonment, “for anyone who organizes a protest or an activity which may result in preventing or slowing down the work of a state institution, a general authority or a public or private workplace.”

The Center for Trade Union and Workers’ Services (CTUWS), a leading Egyptian advocacy group, has together with the independent union movement issued a call for sweeping reforms and highlighted the meaning of May Day in the ongoing struggle for human rights:

Today, we celebrate with the whole world the 1st of May, world Labor Day, the symbol of labor solidarity for so many decades worldwide, and the reminder of their struggle. This day comes to acknowledge that it is laborers who make life; it is their hands that make the edifices of the society; and it is their sacrifices that draw the path for future generations.

The daily struggles and continued hard work of the working class in defense of wasted rights brought the guarantee of the right to form independent and democratic unions formed and managed by workers themselves. This was also the very same driving force that made them announce the foundation of the independent union on 30 January.

Declarations such as this are a greater testament to the defeat of the extremism than Bin Laden’s demise could ever be. After the news broke, American bloodlust was on full display online and in the streets with jubilation at the death of Enemy Number One. The optics of the uproar are put to shame by the Egyptian people’s relentless dignified resistance. Off the media radar, they mobilize against a trio of evils, which they—unlike most Americans—have suffered first-hand in their day-to-day lives: extremist violence, political oppression and American imperialism.

Theirs was not a celebration of vengeance but a demand for justice and equality in a society historically riven with economic, religious and political stratification. As Marwan Bishara writes at Al Jazeera, “for the Muslim world, bin Laden has already been made irrelevant by the Arab Spring that underlined the meaning of people’s power through peaceful means.”

Of course, many challenges lie ahead in mapping a path of equitable development on the evolving blueprint of democratic transition. Besieged by military domination and public anxiety, the country must determine how to balance economic growth and economic justice, and how to revamp a dinosaur of a welfare state without resurrecting predatory neoliberal policies.

Even the issue of overhauling the minimum wage—a key demand of labor leaders—can be polarizing, in ways that reflect similar debates in the U.S., with skeptics arguing that a higher wage floor would limit growth by raising labor costs. It’s near impossible to actually compare the impact  of minimum wage reforms in these two vastly different economies. Still, the parallels in these discussions undercut the notion that political developments in Egypt center around uniquely “Muslim” issues.

Day by day, as activists grow wary that their revolution is getting hijacked, workers and youth are aligning their defenses and their aspirations.

Akram Ismail, an organizer with the Association of Progressive Revolutionary Youth talked to Al Masry Al Youm, “The organization of the working class is a pillar for democratic transformation and the civility of the state,” but he noted that the political arena had been enfeebled by “religious versus non-religious” disputes, devoid of class politics.

Some activists say that so far, the labor movement’s chief goal was not to delve head first into party politics but to cultivate political power by organizing independent unions. On the other hand, Khaled Ali, head of the Egyptian Center for Economic and Social Rights, told Al Masry Al Youm:

there needs to be a link between the workers’ discourse and that of political groups… For years, labor constituted the social heart of the progressive political movement, which in turn served as the political brain for labor. That was important for the labor movement to articulate its discourse and negotiate its demands.

The language of revolution is spoken along class and partisan lines in Egypt, and that national conversation might have been drowned out by the noise of war and terror in the most recent news cycle, but won’t be silenced.

On May Day, independent labor union leaders declared to Egypt’s workers that they aimed:

to tell everybody in Egypt and abroad that the Egyptian working class has been and shall remain a  living organ of the Egyptian body, and will never accept to have its right to association, and expression of the interests of the members compromised again by any means!

But in the hard days to follow, will their voices carry to the rest of the world over the din of constant war?

The final paragraphs of this post were edited after initial posting.