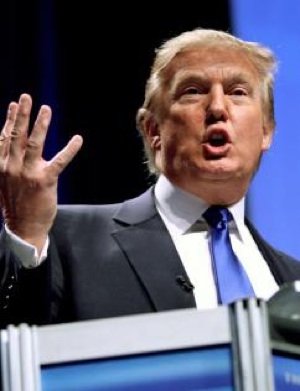 Will real estate and reality TV star Donald Trump throw his hairpiece into the ring to be the next Republican presidential nominee?

Trump managed to capture the nearly undivided attention of the national political media at the end of April when he made himself chief spokesman for the racist “birthers” who hysterically insist Barack Obama faked his American citizenship.

The Obama White House reacted the way it always does to a challenge from the right wing: It caved and released yet more records–which only gave Trump another day in the headlines to crow about how he got Obama to “come clean.”

Then there was a star-turn visit to New Hampshire, one of the first states to hold a presidential primary next year. In early polling, Trump has jumped to the top of the field of GOP candidates competing for the chance to unseat Barack Obama–not such a difficult feat among such bigots, blowhards and clownish has-beens as Newt Gingrich, Sarah Palin, Mitt Romney, Tim Pawlenty and Mike Huckabee.

Trump’s potential candidacy for president–he promises that he’ll make a decision this month–has elicited reactions ranging from shock and disgust to contemptuous laughter. To be sure, many Republican Party leaders think Trump’s candidacy, even in the primaries, would be a disaster.

Yet his maybe-campaign for president, while certainly exposing the weaknesses of the Republican Party and providing a goldmine for comedians, also reveals some uncomfortable truths about the American political system.

In many ways, Donald Trump perfectly represents the advanced state of decay of the U.S. political system. The Trumpster epitomizes the noxious blend of opportunism, parasitism, bigotry and hypocrisy that characterizes the American political and business elite. His strongest qualifications for the presidency are his wealth and his shamelessness–and in the U.S. political system, those are two of the most valuable qualities needed by anyone who wants to scramble to the top of the heap.

The 64-year-old Trump has a net worth estimated at $2.7 billion and a yearly income that ranges between $40 and $50 million. That income gives him an hourly wage of $22,000–millions of Americans earn less than that in a whole year of full-time work.

Like so many of America’s super-rich, Trump didn’t have to work too hard for his wealth. The man who wrote the book Trump: How to Get Rich was born into a family that already owned a 23-room house and a multimillion-dollar real-estate development business. Over the years, Trump multiplied his mega-fortune by racking up loads of debt, riding a wave of real estate speculation–and getting bailed out any time a deal went sour.

Since taking over his father’s company in the 1970s, Trump was involved in hundreds of real estate deals based on channeling government funds to private developers, who destroyed communities and drove longtime residents out of their homes. With plenty of help along the way from local politicians, Trump gobbled up urban real estate in sweetheart deals during the lows of the recession of the 1970s. In spite of all the advantages, though, he managed to completely bungle a surprising number of deals.

The author of Trump 101: The Way to Success has faced financial failure throughout his business career. At the height of his financial troubles, Trump owed more than $900 million in personal debt and $3.5 billion in business debt. Once described as “no stranger to overdue debt” by Deutsche Bank, Trump has been through at least four Chapter 11s with his various companies, yet somehow always managed to come through it all a little bit richer.

Despite these financial disasters, Trump turned his name into one of the most recognizable brands in the U.S., spanning the real estate, airline, sports, casino and television industries. Though Trump is perhaps best known for real estate development or his television antics, the most successful part of his business now involves real estate licensing–which is nothing more than building owners paying Trump to attach his name to their buildings.

In building his name into a world-famous brand commanding millions of dollars, Trump has proven ideologically inconsistent–but reliably bigoted.

In one of his very first acts managing an apartment complex for his father’s company, Trump prevented a Black family from moving into a property in a predominantly white neighborhood in Cincinnati in the 1960s. Trump’s New York real estate company was later sued by the federal government for denying rental applications from Black applicants. The man who recently claimed to “have a great relationship with the Blacks” was sued by the Justice Department for violating the Fair Housing Act.

In the 1990s, Trump took out full-page newspaper ads calling for the death penalty for five young Black and Latino suspects in the Central Park jogger case–the five were later proven innocent after each spending between seven and 13 years behind bars.

Now, after running for president in 2000 as the Reform Party candidate with a platform in favor of abortion rights and universal health care, Trump has remade himself into the champion of Tea Party conservatism: anti-“Obamacare” and anti-abortion, not to mention amateur sleuth when it comes finding Obama’s supposedly missing birth certificate.

Trump played to the most vile bigotry among the Tea Party faithful, saying of Obama during an appearance on the Laura Ingraham Show: “He doesn’t have a birth certificate…He may have one, but there is something on that birth certificate–maybe religion, maybe it says he’s a Muslim, I don’t know.”

Obama’s capitulation to these bizarre requests has only served to validate Trump’s racist inquisition–which he’s now turned to questioning the validity of Obama’s academic record at Columbia and Harvard.

Unsurprisingly, Trump’s bigotry isn’t limited to African Americans and Muslims. It certainly extends to women. The thrice-married co-owner of the Miss USA Pageant, Trump’s personal and professional lives have depended on treating women as disposable objects, valuable only for their appearance and ability to fill the roles that deemed appropriate for them.

Trump has insulted outspoken women for the size and shape of their bodies or for their sexual activities–he infamously sent New York Times columnist Gail Collins a copy of a negative article she penned about Trump with the words “Face of a dog” written over her picture. Trump unfailingly responds to female critics with degrading comments about their appearance.

And now he’s comes out as vocally anti-choice. In an interview on CNN’s Piers Morgan Tonight, Trump recounted the story that supposedly led to his newfound anti-abortion stance–about a friend whose wife was pregnant and who didn’t want his wife carrying the pregnancy to term. Because of “timing issues,” however, the woman ended up having the baby, who is now the “apple of [his friend’s] eye,” Trump said.

The anecdote, whether it’s true or not, is notable for the lack of almost any reference to the woman who had the baby–her decision process or how she feels about being a mother.

In recent years, U.S. politics has become ever more nakedly a playground for the wealthy, the privileged and the powerful–as economist Joseph Stiglitz recently called it, government “of the 1 percent, by the 1 percent, for the 1 percent.”

According to the Center for Responsive Politics, $2.4 billion was spent on the presidential campaign in 2008–with the supposed grassroots hero Barack Obama listing Goldman Sachs, Citigroup, JPMorgan Chase and Time Warner among his top donors in 2008. And this was before the recent Citizens United Supreme Court decision that will give corporations the freedom to spend unlimited sums on political campaigns.

Democrats like Obama are every bit as much to blame as Republicans for the corporate stranglehold on U.S. politics. Three years into the Obama administration, the man who millions of working people voted for because they wanted change is surrounded by Wall Street bankers like JPMorgan Chase executive William Daley and job-cutting corporate crooks like General Electric CEO Jeffrey Immelt.

So it’s little wonder that the Obama administration committed literally trillions of dollars to the Wall Street bailout–while imposing a wage freeze on non-defense federal workers and negotiating tens of billions of dollars in cuts to much-needed social programs.

This is the inevitable result of a political system that is awash in corporate cash–and that continues a revolving door between the corporate boardrooms and the corridors of power in Washington. In that context, why wouldn’t a billionaire CEO be the logical candidate to rule a corporate-run system?

Trump, with his millions in casino profits, has made a fortune off selling illusions to the public. But in an ironic twist, his candidacy appears to be the one most bare of illusions–he is a businessman, a profiteer and an exploiter, and he is promoting himself as such.

Whether Trump will actually make a run of it remains to be seen. His final decision will apparently be announced on the May 22 season finale of his reality TV show–the ultimate consummation of the union between our corrupt political-corporate elite and the seedy world of reality television.

Trump’s possible candidacy brings some of the central dynamics of the U.S. political system into the spotlight. American politics is already a system by, for and of the rich. Politicians like Obama provide a cover for this reality with their rhetoric about looking out for the interests of ordinary people. Trump’s potential campaign does without the charade.