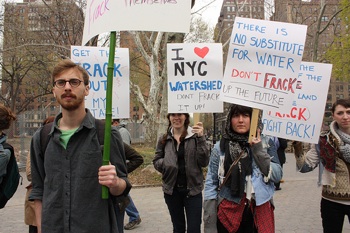 Natural gas is increasingly dominating the energy business and marketed as “clean energy” by energy companies. These days, however, natural gas has been gaining notoriety for the process through which it is extracted – horizontal hydraulic fracturing.

Horizontal hydraulic fracturing, also know as “fracking,” is a process through which a vertical hole is drilled several thousand feet into the ground, and then drilled horizontally into rock under the earth’s crust, creating an L-shaped tunnel. The horizontal hole is lined with cement whereby extremely high pressures of chemically added water and sand fractures the rock underneath, releasing trapped natural gas.

While there are natural high-pressure spots in the U.S. to extract natural gas without the use of hydraulic fracturing, gas companies have been using drilling to access even more natural gas trapped in the Marcellus Shale; a giant mass of rock underneath the earth’s surface that stretches across several eastern states including New York, Pennsylvania, Ohio and Virginia. The consequences of drilling, however, have raised deep concerns over the chemicals used during the process, and the environmental consequences.

As a response, the New York State Assembly, with the approval of Governor Paterson, placed a temporary ban on hydraulic fracturing in the New York City watershed, preventing gas companies from drilling in the area. This moratorium is set to expire on July 1, 2011.

Although hydraulic fracturing is already occurring all over the country, including parts of New York State, New York City has stricter environmental laws in place on drilling in its watershed area, which include the Catskill/Delaware and the Croton watersheds upstate.

City officials fear that the hundreds of chemicals used could contaminate the water we drink by making their way into the water supply underground. Current chemicals used, like nitrogen oxides, hydrogen sulfides and BTEX, are known to cause cancer, infertility, DNA mutation and other health problems. Pennsylvania is currently facing water contamination problems from old and newly formed wells, despite the Environmental Protection Agency’s (EPA) approval on the safety of hydraulic fracturing in a 2005 study. Studies have shown that Pennsylvania’s water contained dangerous levels of these chemicals than permitted for consumption, and gas leaks have been found in many wells.

Environmentalists and independent studies have proven that the extraction of natural gas can release radioactive particles from the earth, contributing to global warming. The chemicals in the water used also build up in the atmosphere because it takes thousands of years for the earth to break them down. Also, the thousands of gallons of pressure from the chemical-water and sand mixture applied concern geologists about disturbing the earth’s crust. Geologists have been investigating into whether or not hydraulic fracturing has been causing small earthquakes in Dallas, Texas around 2008-2009.

However, the Independent Oil and Gas Association of New York and regional gas companies criticized the moratorium and the possibility of an outright ban of hydraulic fracturing in New York. They believe a complete ban would prevent the formation of thousands of jobs, and the state would lose billions of dollars in extra revenue. These companies also maintain their stance on the safety of this procedure, and some gas companies began to recycle their chemical-water and sand mixtures for other wells, claiming this practice is much safer to prevent contamination.

Most of the land in the New York City watershed is privately owned. This means making a complete ban on drilling in the watershed area is difficult to do, as the state cannot make these decisions solely for the private landowners. Vertical hydraulic fracturing, which forms shallower wells, is still permitted in the state.

Currently, energy and gas companies are waiting for the moratorium to end to apply for drilling permits on horizontal drilling. Investigations by Pro Publica, the New York Times and various environmental groups have confirmed that there have been several hundred cases of water contamination across several states due to leaked chemicals from these fracking wells.

In the meantime, the EPA is re-doing a study on the safety of hydraulic fracturing. The final research results by the Science Advisory Board will be finished at the end of 2012, and made available in 2014. The condition of New York City’s watershed and water supply will be left up to Governor Cuomo’s decision-making after July 1.

Around 40 environmental groups wrote a joint statement letter to Governor Cuomo, asking for an extension on the moratorium, stating that the July 1 date is insufficient time for studies to conclude on the safety of this fracking.