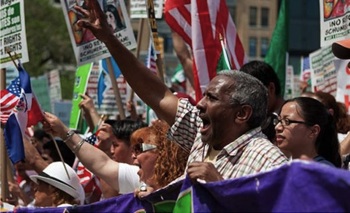 I have two abiding memories from third grade. The first is of reciting the pledge of allegiance: rows of white, black and Latino kids (and me, the lone South Asian) taking a deep breath before the climactic words “with liberty and justice for all.” My other memory is of us kids diving under our desks when the air raid alarm went off, a practice induced by Cold War paranoia. Each year as May 1 rolls around, these two memories stand side by side as I watch corporate media’s response to the day’s vibrant marches for immigrant and labor rights. The inspiring scene of several hundred thousand very diverse people asserting their Americanness is followed by the paranoid fantasies of people who see foreign invasions coming to their home towns.

This weekend, cable news outlets covering the annual May Day marches will flash images of immigrants holding their homeland flags, in the long tradition of Americans who are both proud to be here and proud of their heritage. As always, there will be relatively few of these flags compared to the gads of red, white and blue waving above the crowd. But pundits and reporters—and I don’t just mean on Fox—will nonetheless discuss them as evidence that today’s immigrants are less patriotic than yesterday’s. Pat Buchanan will repeat his tired assertion that “90 percent of today’s immigrants come from countries that have never been assimilated into any Western civilization.”

I’d like to respond with a scoff—“Never assimilated? Yeah, so what?” But I know that in fact, I am as assimilated as any other immigrant kid of any other time. Growing up, I spoke English quickly and learned to like American food. When I go abroad today, I run around hugging people I don’t know well, a distinctly American informality. I’ve assimilated just fine.

Other pundits will argue that this economy cannot accommodate immigrants. Mark Krikorian, director of the close-our-borders think tank Center for Immigration Studies, believes that the U.S. has outgrown its need for immigrants. The economy has changed too much, he claims, to accommodate illiterate peasants, or even large numbers of skilled workers. We have a mature welfare state that has to provide for all these people, and CIS spends a great deal of its energy trying to prove (often by including U.S.-born children of immigrants in their definition) that immigrants use more public resources than they contribute. Study after study shows that the opposite is true—check them out here, here and here.

My father is a great example of how immigrants help to grow an economy. Dad was a metallurgical engineer, yet, he spent his first year in the country doing day labor. He got his first professional job in an aluminum factory in New York’s Hudson River Valley, where I learned to speak English in a two-room schoolhouse during first grade. He lost and gained several more jobs after that, as the economy started its long shift from manufacturing to service-based industries. When he was about to lose his fourth job, he started his own home-improvement business. For 16 years, he employed dozens of white, working-class men. When my mother sold the business a decade after his death, my father’s longest time employee, a white working class man, bought it and continues to run it today.

My dad didn’t steal a job; he competed for it when he had the opportunity. He didn’t take a loan from someone else; the bank would have made as many business loans as it could. He paid all his taxes, as do even most undocumented immigrants, and he created something long lasting that has provided livelihoods for many of the sort of men who are now supposedly represented by the tea party movement.

Some immigration hardliners will say that they reserve their animus for those who don’t go through the proper channels. These people are lying, according to Krikorian, to make themselves feel better about their anti-immigration stance. This is one of the few Krikorian statements with which I agree. Restrictionists feel the need to cleave immigrants into good, lawful newcomers and evil cheaters because migration is so central to so many American experiences. We can’t just leave it behind, as Krikorian would have, without losing track of who we are as a country. Immigration is as critical an element of Americanness as is being white.

Since today’s immigrants are no longer mostly white, these two parts of our national identity, migration and whiteness, are in increasing conflict, aggravated by an economy that’s created few jobs for anyone, immigrant or otherwise. That conflict played out painfully all this week as Donald Trump—the epitome of a not-self-made but nonetheless smug white man—made a president with a migrant father of color document his birth yet again. That conflict plays out every time Arizona cops stop a person who “might be illegal.” It plays out each time an immigrant is attacked violently on the street or in their own home.

Air raid sirens are now anachronisms, the childhood memories of those of us born before the Cold War’s end. The Buchanans of the world have created a different paranoid drill for today: racial anxiety about migrants storming our borders. But nothing can change the fact that the country is indeed growing browner. If that diversity is accompanied by equity—the guaranteed right to opportunity, education and constitutional protections for everybody who lives here—then we can hope for a future as a unified, vital community. Without equity, today’s immigrants and their descendants will continue to assert those rights, through May Day marches, sit-ins, studies and whatever means they can find.

Rather than pushing people out, or turning to an apartheid system in which a white minority controls a colored majority, we’ll be far better off by taking the many paths to unity that do exist. We can drop the language of “illegality,” recognizing it for the non-starter that it is. We can integrate immigrant families, with all their varied statuses, into American opportunities, as the Maryland legislature has done by passing its DREAM Act. And we can speak out for a culture of acceptance, which is the only way to generate great economies that aren’t built on the backs of people whose rights have been stripped away. Those are the actions that will allow us to keep a great part of our identity—that of the enterprising migrant—while letting go of the notion that only a white American is a real one.