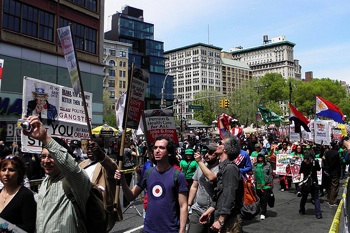 In the wake of collective bargaining attacks in the Midwest, anti-immigrant state legislation throughout the country and a real unemployment rate of nearly 16 percent, a broad coalition of labor and immigrant rights groups will be holding rallies in New York City on May Day.

While the two demonstrations will start out at separate locations — Foley Square and Union Square — they will converge for a final rally at Foley Square later in the afternoon.

The main groups involved in organizing the May Day Our Day demonstration — the May 1st Coalition for Worker & Immigrant Rights and the Labor Rights, Immigrant Rights, Jobs for All Coalition — say they want to present a broad opposition to the current attacks on labor unions and immigrant workers.

“I think that all of the organizers for both rallies recognized that our survival depends on our unity and solidarity,” said Teresa Gutierrez, co-coordinator of the May 1st Coalition for Worker & Immigrant Rights.

While the May 1st Coalition has been holding rallies at Union Square since 2005, the Foley Square May Day event started last year, with labor groups primarily spearheading the efforts.

“We call on all people of good will to join in denouncing the ongoing attacks on labor, bargaining rights, wages, benefits and the indelible right of all workers to join unions throughout this nation,” said Sonia Ivany, co-chair of the Foley Square Rally and president of the NYC Labor Council for Latin American Advancement.

A broad cross-section of immigrant rights, labor, antiwar and religious groups will attend both rallies.

Plans are already in the works for the two groups to work together on May Day 2012.

Gutierrez says the May 1st Coalition’s next step after the rally will be to launch a campaign against mass deportations of immigrants. Hundreds of thousands of people have been deported through the Secure Communities program, which enables local police and Immigration and Customs Enforcement to share information about immigrants’ legal status.

“[This] is a tsunami of injustice,” Gutierrrez said.

Take It to the Street

Calling it “The Day We Made Wall Street Stand Still,” a coalition of city unions and community organizations is planning to bring an anti-austerity message to the center of the Financial District on May 12. With the United Federation of Teachers and SEIU Local 1199 taking a leading role, organizers are hoping for a large turnout.

The protesters will demand that Mayor Bloomberg stop proposed budget cuts and attacks on public sector workers and instead make the financial industry help pay for the economic crisis they started. For more information, see facebook.com/onmay12.