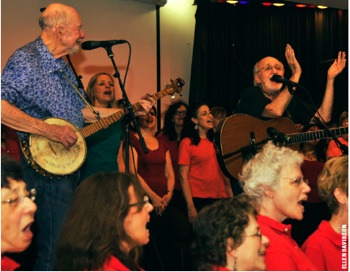 LEGENDS: Pete Seeger (left) and Peter Yarrow (right) of Peter, Paul and Mary perform at a May 13 benefit concert for fellow folk musician Anne Feeney who is recovering from small cell lung cancer. Called “the best labor singer in North America” by Utah Phillips, Feeney is the author of eight solo albums including “Have You Been to Jail for Justice?” and “Dump the Bosses Off Your Back.” Held at Local 1199’s auditorium in Midtown, the concert also featured the New York City Labor Chorus (foreground) and the Brooklyn Women’s Chorus (background). For more information, see annefeeney.com.