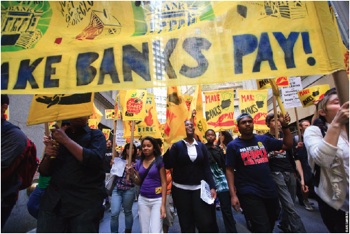 Mayor Michael Bloomberg has carried out $5.4 billion in budget cuts since the economic crisis hit in 2008. The victims of our mayor’s bean counting have been among the city’s most vulnerable residents: homebound seniors, children at risk of being abused or neglected, summer job participants, immigrants taking English classes.

When Bloomberg proposes his budget cuts, public sector unions, community-based organizations and advocacy groups are typically drawn into a zero-sum game in which each group lobbies its City Council allies to protect its interests from cuts when a final budget deal is struck with the mayor. Holding a press conference on the steps of City Hall or a small, noisy rally on the sidewalk just outside of City Hall is an almost obligatory ritual.

On May 12, several unions and scores of community-based organizations and advocacy groups broke with the usual script. In doing so, they provided a tantalizing glimpse into the possibilities for building a broad-based resistance movement against the mayor’s drive to impose austerity on ordinary New Yorkers. 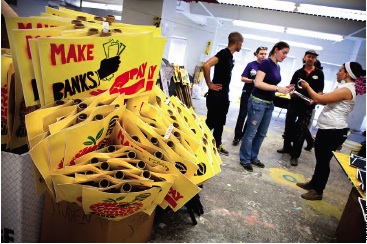 Facing another, deeper round of budget cuts in the mayor’s proposed budget (see sidebar), the coalition mobilized 20,000 demonstrators who poured into the financial district in a swirling, carnivalesque protest that targeted Wall Street and the nation’s six biggest banks. Three years after crashing the economy, the Big 6 (Goldman Sachs, JPMorgan Chase, Morgan Stanley, Citigroup, Bank of America and Wells Fargo) are raking in combined profits of over $199 million per day.

“Give the money back, and create some decent fucking jobs,” said Jacob Macall, 29, of Astoria, Queens. “How the fuck are people supposed to live off of $9 an hour or $7 an hour in a city that is this expensive?”

The May 12 mobilization was the largest and most militant to date in a growing series of actions (see timeline) in New York against economic policies that redistribute wealth upward to the super-rich while punishing the poor and working classes. Among the protesters’ demands was that Bloomberg support a campaign to have New York state renew a tax surcharge on the top 3 percent of income earners, which would bring hundreds of millions of dollars into city coffers. 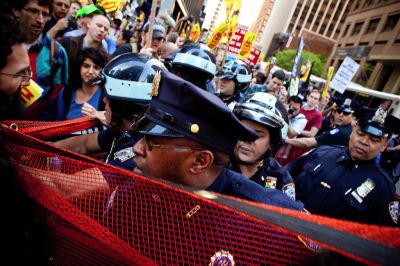 The protest was composed of eight feeder marches organized around themes such as education, housing, human services, jobs and immigration. The marches began at various locations in Lower Manhattan, converging at Wall and Water Streets at the bottom of the financial district. Seven of the eight marches did not have permits though the largest one — led by the United Federation of Teachers (UFT) — did. For New Yorkers who have chafed for years at being herded into protest pens by the NYPD, the sense of liberation was palpable.

“It was great,” said Marcia Newfield, an adjunct lecturer at the Borough of Manhattan Community College. “You would be marching down one street in the financial district, turn a corner and be joined by another march. You could feel the crowd getting larger and the solidarity growing
stronger.”

“When you pen people in, you confine and you squash their militancy. And what you need to do is the opposite,” said Mark Torres, a public school teacher and parent activist from Harlem. “You’ve got to unleash . . . people’s creativity and unleash the power for us to take the streets and to make a change in the city.”

The demonstration featured open-air teach-ins about the economy, stilt walkers and stirring musical scores from the Rude Mechanical Orchestra marching band. A team of artists produced hundreds of colorful handmade flags, banners and placards. For many, it was their first encounter with the freewheeling style of mass protest that last came to prominence at the 1999 Seattle World Trade Organization (WTO) demonstrations and became a signature of the alter-globalization movement that flourished briefly a decade ago. This escalation in tactics was not a coincidence as two of themain Seattle WTO organizers, Lisa Fithian and David Solnit, were brought in by unions to help catalyze the event.

Inspired in part by recent uprisings in Wisconsin, Egypt and Tunisia, the May 12 action suggested new possibilities for building massive opposition to Bloomberg’s austerity agenda. But, will it turn out to be a one-off event? Or is May 12 something that its organizers will build on? And if so, to what end? 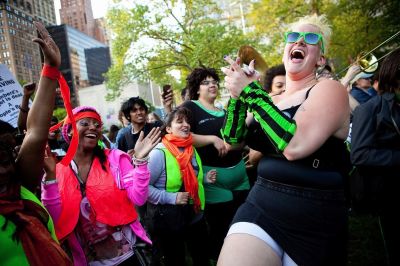 Another coalition, New Yorkers Against the Budget Cuts (NYABC), which led a smaller march on Wall Street on March 24, is calling for a mobilization that will be held at City Hall on either June 25 or June 26, days before the July 1 deadline for concluding a budget. NYABC also plans to hold community forums in June in the Bronx, Queens and Brooklyn as a part of a citywide outreach effort.

“We want to be in a position to sway the vote or stop it,” said Yotam Marom of the Organization for a Free Society, one of a number of small left groups that make up NYABC. “It’s going to be a real showdown. We want to have a critical mass of people from different backgrounds be strong enough to say, ‘We’re not leaving until this budget is dead.’”

It remains uncertain whether the unions and more mainstream progressive community organizations that came out en masse for May 12 would mobilize for another mass demonstration and/or make common cause with their more radical colleagues.

“They [the May 12 coalition] weren’t planning ahead,” said a source close to the leadership of one of the city’s largest unions. “The time to be planning the next big action is now not in June.”

Assuming the May 12 coalition remains intact — the UFT has a long history of opportunism and could always cut a separate deal with the mayor — there’s no indication yet that the member groups are planning to step out of well-worn grooves. Staging a spirited fightback against Bloomberg’s budget cuts or engaging in targeted corporate campaigns against bad actors such as JPMorgan Chase and Walmart is one thing. Building a broad-based, truly independent mass movement that breaks with both the Democrats and the Republicans and presses fundamental demands about how power is exercised in New York and in whose interest is quite another.

For now, said Marom, who also has organized with the May 12 coalition, the overriding priority is to stop Bloomberg’s budget cuts and the damage they could do to communities across the city. However, he noted, building the grassroots power to win the budget battle could have longer-term benefits as well.

“If we can win on this budget, we can be in a position in the future to make demands for things we haven’t had yet…But if we lose on the budget, then we’re in the same place.”

Jaisal Noor contributed to this report. For more information, see onmay12.org and nocutsny.wordpress.com.

Mayor Bloomberg unveiled his proposed executive budget on May 6. The measures he called for include:

* $40 million in cuts for libraries; critics say branches would only be able to open three days per week.

* A 30 percent cut in the Department of Aging’s funds to provide seniors with services such as meal delivery and at-home care.

* Reducing the daily ration of bread for city inmates.

Source: Office of the Mayor

Percentage of Income Earned by the Top 1%

March 23: 33 faculty, staff and students from the City University of New York make headlines across the state after they are arrested for blockading the entrance to Gov. Andrew Cuomo’s office in the State Capitol.

March 30–31: More than 500 protesters from several NYC community groups occupy the State Capitol in Albany while legislators rush behind locked doors to pass a budget that mandates billions in cuts for vital social programs while allowing the millionaire’s tax, a surcharge on high-income earners to expire.
April 9: 10,000 union members hold a “We Are One” rally in Times Square in support of worker rights. On the same day, several thousand antiwar protesters gather in Union Square and connect the cost of fighting three wars in the Middle East to budget cuts at home.

May 1: Thousands of immigrants and union members rally and march in Manhattan for worker and immigrant rights.

* Restore the state’s millionaire’s tax and hundreds of millions of dollars would flow into city coffers.

* End three property tax exemption programs that cost the city $2 billion a year. Two of these exemptions are up for renewal in Albany this year.

* Reduce police overtime, currently clocking in at $538 million a year, or almost 12 percent of the NYPD’s 2011 budget.

* Reduce expenses in the central office of the Department of
Education, which is slated to add 218 positions and spend more than $75 million on contracts for computer services and
administrative personnel services.