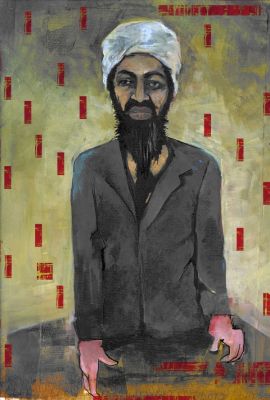 He terrified millions with the September 11 attacks that killed thousands of Americans. He inspired millions of others for striking at Western powers. But for the “world’s most wanted terrorist,” killed by U.S. forces on May 2 in Pakistan, his enduring legacy may have been summed up by the tweeter who asked, “Who the fuck is Osama bin Laden?”

Mr. Bin Laden had dropped from view in recent years, reduced to basking in past glories in a secluded villa in an exclusive suburb, not unlike his death-dealing partner, George W. Bush, currently believed to be lurking in a high-walled compound in a fundamentalist belt near Dallas, Texas.

President Obama announced the Al Qaeda leader’s death in a dramatic late-night address May 1. Showing the world that when the Sony Playstation network goes down America is still capable of achieving great things, elite U.S. forces stormed Mr. Bin Laden’s compound at night, losing the element of surprise, crashing only one super-secret stealthy helicopter and taking 40 minutes to complete the task of executing the unarmed terrorist leader, thus ensuring no one will ever know to what extent he was funded by the CIA decades ago.

The President said Mr. Bin Laden was buried at sea, keeping with U.S. policy of stoking the ravings of conspiracy theorists who, having already determined that the “airplanes” which struck the World Trade Center on 9/11 were really computer-generated holograms, are now bent on proving that the post-plastic surgery Bristol Palin is a cleverly disguised Mr. Bin Laden.

Following news of Mr. Bin Laden’s death, Americans lacking jobs, healthcare and a sense of positive self-identity poured into the streets in a ritualistic frenzy of home-team triumphalism marked by horn honking, public drunkenness and crowds trying to recall all the words to chants of “U.S.A.! U.S.A.!”

For President Obama the bullet to the head of Mr. Bin Laden was the first shot of his re-election campaign. Mr. Obama’s message to voters will be “We Do Big Things,” contrasting himself from Republicans by his determination to commit extrajudicial assassinations, launch illegal wars, expand offshore oil drilling, bail out investment banks, spy on Americans, undermine treaties on climate change, cut taxes for the wealthy, torture detainees, bash public sector unions and slash spending on health, education and pensions.

But asking Americans to recall Mr. Bin Laden in 2012 may prove too taxing for a public more capable of naming Snow White’s seven dwarves than the Supreme Court’s nine justices.

Indeed, while Mr. Bin Laden was consumed by his own myth — a liberator of Muslim lands, a warrior battling infidels, a benefactor of Islamist guerrillas — he was ultimately a petty war criminal who made a name for himself as a freelance murderer but paled next to IMF and State Department functionaries that consign nations to oblivion with the stroke of a pen.

His achievements came in other realms. Al Qaeda pre-figured lucrative social networking sites like Facebook, but Mr. Bin Laden was unable to monetize it apparently due to a lack of hoodies and ironic t-shirts. He was a pioneer in “asynchronous communications,” low-budget videos broad- cast from caves literal and figurative, portending fire and torment for his enemies, a technique now employed by other tyrannical fanatics from Muhammar Gaddafi to Sarah Palin.

His masterminding of 9/11 boosted everything from for-profit mercenary companies, blinkered American nationalism and Lee Greenwood’s flailing career to snack food sales, bloviating Islamophobes and Chinese manufacturers of tiny American flags. His impact also led to the creation of 216,000 Homeland Security jobs and was ultimately responsible for catch phrases like, “Don’t touch my junk!”

Mr. Bin Laden was 54, and leaves behind six wives, lots of children, scattered bands of dour, violent followers and one unbelievably fucked-up world.