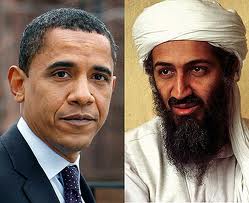 A black helicopter lands in a whirlpool of sand, President Obama steps down as soldiers circle him. He walks toward a cave, signals them to wait and goes inside the echoing darkness, his hard heeled shoes click on stone. Obama turns on a flashlight and sees Osama Bin Laden hog-tied in the corner.

Obama whistles as he kneels close to Bin Laden, studies the gagged mouth, watery eyes. “Do you know how many times people have called me Osama?” He strokes Bin Laden’s beard. “During the campaign they’d purposefully miss-pronounce my name from Obama to Osama, trying to link me to you, trying to transfer the terror and hate from you to me.” He yanks out a piece of Bin Laden’s beard. “Now that will end. No more Freudian slips. No more stupid posters with me looking like you, no more saying I’m from Kenya or that I’m a Muslim.” He grips Bin Laden’s throat. “You’re death gives me life.”

Obama squeezes Bin Laden’s neck, veins pulsing like water hoses in his hands as Bin Laden’s eyes roll up. “Do you know how hard I had to fight to be accepted, to be normal. Do you know how hard it is to live with Double-Consciousness but no, there is always someone like you; a Mr. Hyde to my Dr. Jekyll, an Evil Kirk to my Good Kirk, a Lex Luther to my Superman. Always there’s someone like you, a medieval God-whisperer who makes the rest of us look bad, who takes the rage of the wretched of the earth and make it crude and ugly and stupid.”

Days later, President Obama is in the White House, walking on a red carpet up to a podium with a black bag. Reporters angle pens on pads, cameras focus. “Good evening. Tonight I can report to the American people and to the world. The United States has conducted an operation that has killed Osama Bin Laden, the leader of Al Qaeda and a terrorist who is responsible for the murder of thousands of innocent men, women and children. And to prove it…” Obama reaches into the black bag and pulls out Bin Laden’s head. Gasps, screams and yells fill the room and outside it, millions of Americans stare silently and then raise a howl of joy.

Smiling President Obama turns the head around but Bin Laden’s eyes open and his hair moves like snakes. A yellow light shines from his mouth and in the White House Press Room a few men and women turn to stone. Across the nation in bars and churches, in cafes and homes; whoever has ever killed another human being out of cruelty or blind obedience becomes a gray stone statue. The howls of joy become shrieks of terror as on TV, President Obama is a cold granite figurine, stuck in a pose of curiosity, staring into the eyes of Bin Laden.