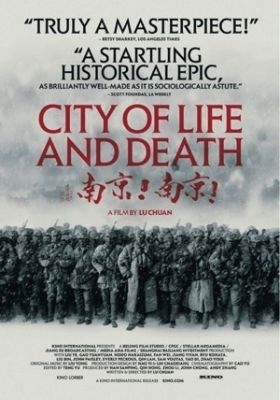 City of Life and Death, Lu Chuan’s third feature film, details the unspeakable atrocities that occurred during the 1937 Nanjing Massacre, when Japanese forces captured the former capital of the Republic of China, killing an estimated 300,000 civilians and raping 80,000 women over a six-week period.

The film opens with recollections of the massacre’s onset from first-hand accounts written on postcards and a powerful evocation of the otherworldly setting through the eyes of Japanese officer Kadokawa (Hideo Nakaizumi). Once the narrative unfolds, however, it abandons historical consciousness and devolves into an obvious morality play.

After reading Japanese soldiers’ accounts of events, Chuan decided to attempt to humanize their brutality. As a numbing sequence of rape, murder and violence crushes the survivors’ spirits, the film fails to convincingly integrate the struggles of individual characters with the overall banality of evil.

Instead of challenging Japan’s stubborn reluctance to officially acknowledge the specifics of the Nanjing tragedy, City of Life and Death channels the national, political and ethnic dimensions of this shameful episode into a universal parable of abuse of power.

The “good” characters stand out because they are qualified as Western — by association if not pedigree — and their charitable gestures are framed within a sphere of Christianity and personal redemption rather than popular resistance. In a church, German businessman and obvious Schindler equivalent John Rabe (John Paisley) breaks into guilty tears when announcing that a hundred Chinese women must sacrifice themselves to the pleasure of the Japanese to ensure the safety of other Nanjing residents. With similar pathos, right before his forced departure from the city, Rabe falls to his knees as he watches the Chinese clamor for help behind a fence. Mr. Tang (Fan Wei), Rabe’s assistant, atones for his selfishly opportunistic behavior by staying in Nanjing to face certain death, but he is motivated by gratitude for his pregnant wife’s escape, not support for his countrymen.

City of Life and Death carries a decidedly misogynist undertone in its treatment of women as enablers of male compassion, hope, mourning and resilience. Kadokawa’s affections are reflected through his romance with a Japanese prostitute and his spiritual bond with Tang’s sister-in-law, Miss Jiang (Gao Yuanyuan), who gives him her rosary, when he reveals he attended a Christian school.

Geared to express airy religiosity over wartime madness, Chuan’s direction, though undeniably accomplished, misfires because of its tightness. Visual motifs like the recurring focus on hands prove as transparent as the portentous musical score. Carefully wrought compositions appear as clean and detached as the black-and-white cinematography that gives them shape.

“Life is more difficult than death,” Kadokawa ruminates in conclusion, after freeing two Chinese prisoners of war. If the filmmaker’s exercise in Hollywood grandiloquence was closer to the contemplative nuance of Malick’s The Thin Red Line, or even the unadorned humanity of Eastwood’s Letters from Iwo Jima, this final note would have sounded less complacent.