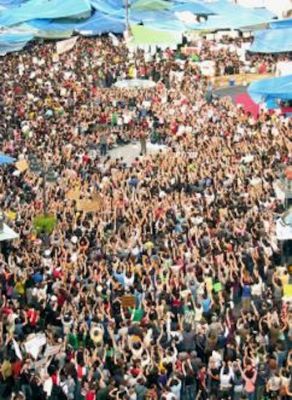 Pictures of Madrid’s central plaza known as Puerta del Sol bear an uncanny resemblance to Tahrir Square in Cairo following more than a week of demonstrations and an ongoing encampment in protest of the devastating effects of the economic crisis and the Spanish state’s collaboration with bankers and business interests to impose austerity.

The demonstrations began with an Internet call for a May 15 protest to demand “real democracy.” Tens of thousands turned out, and many stayed into the night as the encampment began. The protesters–dubbed “indignados,” or the indignant–endured a vicious police crackdown, but the occupation has continued, gathering strength and spreading to cities and towns across Spain, in spite of the fact that no major unions or political parties have participated.

A chief focal point for the anger is Spain’s government, led by Prime Minister José Luis Rodríguez Zapatero of the center-left Spanish Socialist Workers Party. Like the Labour Party government of Tony Blair and Gordon Brown in Britain, Zapatero spared no expense in bailing out Spain’s financial system when the crisis hit in 2008, but there’s been no help for working-class people. Now, unemployment is hitting hard, especially among youth, where the official jobless rate is over 40 percent. The government’s responsibility for this economic disaster was the obvious reason for the rout of the PSOE in local and regional elections on May 22.

Some commentators confused the anti-Zapatero attitude of the Puerta del Sol demonstrators as a rejection of the left, but the opposite is true–the protesters are demanding real democracy and an end to neoliberal measures to make workers pay for a crisis the bankers caused.

The occupations were originally planned to last until the Sunday, May 22, elections, but the main assembly at Puerta del Sol voted to continue the encampment for at least another week, and to use the plaza as a base to spread the protest movement to neighborhoods throughout the city.

Sam Robson is a teacher in Madrid, a member of the socialist organization En Lucha and a participant in the Puerta del Sol occupation. He answered questions from Helen Redmond a few days before the May 22 election.

Helen Redmond: How did the protest movement get started?

Sam Robson: There was a demonstration on May 15 under the slogan “Democracia Real Ya! No somos mercancía en manos de políticos y banqueros.” (“Real democracy now! We are not merchandise in the hands of politicians and bankers”)

The protest was called through Facebook by a group of “indignados” (the indignant) against the effects of the economic crisis–and the way we’re governed, which dictates these effects. Support grew and grew, and the demonstration was a huge success, despite not being called by any established organization, union or party. There were 40,000 to 50,000 people in Madrid and about 80,000 demonstrating simultaneously in 60 other Spanish cities.

After the demonstration in Madrid, people stayed around in the Puerta del Sol plaza, talking and so on–and as the night drew on, the idea emerged to stay there, camped out, until the elections on May 22.

In the early hours of Tuesday, May 17, the police carried out a violent eviction of the camp After that, a call went out to retake the square, and that night, thousands of people turned out to do so. From then on, there’s been a permanent camp in the Puerta del Sol. The routine is that at 8 p.m., people concentrate–20,000 or 25,000 every night, and each night more than the night before. Most people go home between Midnight and 2 a.m., but 3,000 to 5,000 stay to sleep each night.

HR: Talk about the atmosphere in Puerta del Sol.

SR: Obviously, in the evenings, when the square is packed full of thousands of people chanting and so on, it’s amazing. The atmosphere is a confirmation of everything we believe as revolutionaries. Effectively, a mini-city has been established, and you can see how, when people take power into their own hands, even if it’s only in one small area, the we have the potential to run things.

Everything is organized through a central assembly, which is divided into smaller assemblies to deal with different aspects of the movement, such as actions, future plans, food, communication and so on.

The assemblies are all open and consist of hundreds of people. In that sense, the size is a problem–so each assembly has a series of commissions which deal in more detail with logistical matters. But these are also open to anybody to participate.

Within the camp, there is a cleaning schedule so that the plaza is cleaned constantly. There is a child care center, a library, free food and water distribution, a first aid tent and blanket distribution for the night. There’s also been, from the start, a decision not to drink in the camp, because at first, the demonstration was dismissed by some as a big “botellon”–a big drinking session.

The whole idea projected at first was that only young people were involved. It is true that most of the people are young, but there are people of all ages and types. For example, I’m a teacher, and of the 50 or so staff at the school where I work, at least 10 have been here, and several have been at various times until the early hours of the morning.

HR: What kind of demands are the demonstrators making on the government?

SR: There are a series of demands, and the assemblies are refining and working on these constantly. They range widely. Some are specific measures, such as more state child care; or the right to decent housing for all, which is supposedly guaranteed by the constitution; or decent employment–that is, not just jobs but secure work with decent pay. Other demands include electoral law reform, anti-corruption measures and a referendum on the establishment of a republic.

HR: Protesters refused another ultimatum by the government to leave the Puerta del Sol on Saturday. Was there a confrontation with police?

SR: Theoretically, the day before the elections on May 22 is supposed to be a “day of reflection,” and there’s no political campaigning. So the Electoral Council ruled the camp illegal on this basis. The lack of confidence they had about doing this was reflected by the vote in the council–5 to 4, with one abstention.

The result was that on Friday night, there were more people than ever–not only in the Plaza, but the streets all around were filled with more people. It was a fantastic moment when midnight drew near–the whole crowd, tens of thousands of people, fell silent to hear the chimes of the clock–just as people traditionally do in the same plaza on New Year’s Eve.

When midnight struck, and the police did nothing, the atmosphere was incredible. Of course, in reality, everybody knew there would be no confrontation because the only way to clear us out of the square would have been a massacre. In fact, since last Wednesday, the police presence has been minimal. The police have withdrawn in the knowledge that they couldn’t really do anything about the occupation.

HR: Do the campers have the support of people in Spain generally?

SR: I think it’s overwhelming. There was a poll on mainstream television showing that 70 percent of people were in favor of the camp being there during the day of reflection, which is usually seen as pretty sacred.

HR: Spain has many immigrants from countries in Latin America and Africa. Are immigrants participating in the occupation in the Sol?

SR: They are indeed, although I would say they’re probably underrepresented compared to their numbers in society as a whole. However, there are banners in various languages, and one of the specific demands of the movement is the repeal of anti-immigration legislation.

HR: What are some of the debates among the demonstrators?

SR: Everything is debated all night long, but one thing isn’t being debated–and it will have to be in order to address a weakness of the movement–is the anti-party nature of the demonstrations.

For obvious reasons, no parties are welcome. Any banner with the logo of political parties or political groups is not allowed in the square, as agreed to in the central assembly right from the start of the occupation.

The problem is that this rejection draws no distinction between the official parties and corrupt unions on the one hand, and the alternative unions and political groups who share all the objectives of the movement and in fact have been campaigning for them for years.

At the moment, it’s very hard to broach this question, although the movement is very political. The whole square is covered with banners, hung from every available space, including many proclaiming revolution. One huge banner reads, “No Solution Without Revolution.” Some banners are covering massive official advertisements, and the firefighters were called in to take them down, but they refused to do so.

So you can see how the rejection of unions and political organizations can start to be broken down.