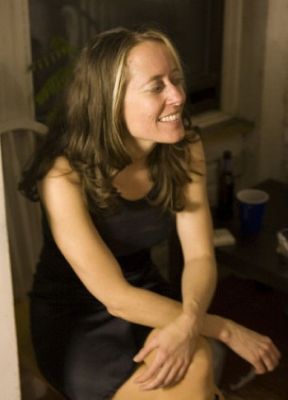 More than eight years and 130 issues later, Ryan Dunsmuir is stepping down as one of The Indypendent’s key designers.

Dunsmuir first joined the newspaper in 2003 after previously doing design work for newspapers in California. Since then, The Indypendent has won six awards from the New York Community Media Alliance for outstanding design, all in 1st or 2nd place.

“When I went to the first Indy meeting, I was impressed with how smart everyone was, and the quality of the content, but it was also pretty obvious the paper could use a little design love,” Dunsmuir says.

“Ryan was a terrific designer as evidenced by her many awards, a pleasure to work with and an incredibly hard worker. She would often stay up all night, helping put an issue of The Indypendent to bed, and then, without going to bed herself, put in a full day at her regular job,” Gupta says.

Another Indypendent designer, Anna Gold, took a break from design work in December 2010, and she and Sam Alcoff welcomed a new addition to their family, Arthur Lawrence Bayano Alcoff, in early February.

Steven Arnerich and Mikael Tarkela, a recent addition to the design team, are currently the force behind designing each issue of the newspaper.

Arnerich, who has been doing design work with The Indypendent for the past four years, greatly enjoyed working with Dunsmuir.

“I’ve worked with more designers than I can count—Ryan is that rare one that always has a clear and direct expression; her solutions rest on deep aesthetic principle. And she is such a good soul,” Arnerich says.

John Tarleton, who worked as the General Coordinator at The Indypendent from 2001 to 2009, credits Dunsmuir’s patience with getting the staff through many stressful closing nights.

“Ryan’s fortitude and her grace under pressure always kept us on track. Her skills as a designer made the paper beautiful,” Tarleton says.

While Dunsmuir looks forward to having more time to focus on her own work, she will always remember her time at The Indypendent fondly.

“It might be weird to say I feel lucky to have worked insane hours unpaid for most of the years I lived in NYC, but somehow I do,” Dunsmuir says.