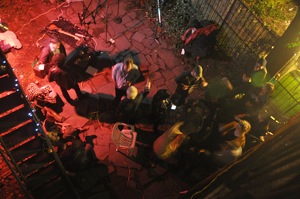 In April, a Lower East Side salon hosted a multimedia art opening titled “I feel so sorry for myself.” I wondered if the salon’s proprietor, Steve Cannon, wasn’t feeling that way himself right about now. Cannon, 76, has lived in the townhouse at 285 East 3rd Street for the past forty years, for half of which time he’s been running A Gathering of the Tribes, a salon and art gallery. Cannon, who is blind, found out in March that the building was for sale when a visiting friend asked him about the realtor’s sign out front.

At the opening, which featured the paintings and drawings of eight artists from the Netherlands, a hundred visitors wandered the apartment’s three main rooms while a band played in the garden. A silent gramophone sat prominently in one corner; a piano was on the opposite side of the room. Occasionally someone tapped out a tune on the piano while watching a video installation on the adjacent wall.

Officially, A Gathering of the Tribes is a nonprofit arts organization that hosts poetry readings and musical performances, exhibits visual art and publishes a semiannual magazine. Unofficially, it’s an incubator for emerging artists of all types.

Exavier Wardlaw, 63, a playwright and long-time friend of Cannon, describes it as the last of the Harlem Renaissance. Tribes’ goal is to be a space for young artists to gather and express themselves, and especially to promote cross-pollination between writers, visual, and performance artists. As a multi-cultural and multi-generational art space, “there’s no similar place in New York,” says Jeff Grunthauer, 29, who is a grantwriter for Tribes. 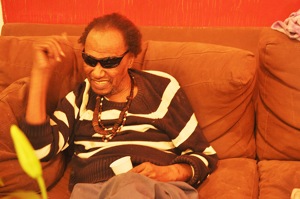 MOUNTING DEBTS
“My problem is, I can’t say no,” Cannon explains. We’re sitting in his living room with Grunthauer and Wardlaw, who’s here today to audition actors for his new play, Angels, Giants, and Monsters. During our conversation, actors filed in and out of the room behind us. Friends and well-wishers dropping by to see Steve went directly to the living room couch, which was conveniently placed across from the front door.

“If someone comes in and says Steve, can I have an art show, can I read some poetry here — in spite of what it’s gonna cost, I always say yes.” Cannon, who was a humanities professor at Medgar Evers College and Hunter College as well as a poet and novelist, retired from CUNY in 1989, around the same time he began losing his eyesight. Tribes was incorporated as a nonprofit in 1990.

Financing Tribes got Cannon into significant debt, and he sold the building in 2004 for $950,000. His goal was to carry on the organization’s work without the stress of managing the building. Out of more than 20 potential buyers, Cannon says Zhang “was the only one who seemed like she was going to be square with me.” According to the agreement they signed at closing, Cannon would be able to live in his current second-floor apartment for five years, paying $1,000 a month, with the option to renew for an additional five years at $2,200 a month (which he has been paying since 2009).

It seems Zhang, too, has been plagued with financial trouble ever since she took over. She told me she spent about $500,000 to renovate the building and bring it up to code. Despite installing higher-rent tenants in the other three apartments, she still spends about $2,000 a month on the building. Cannon’s is the only apartment that’s been continuously occupied since he sold the building; other units were vacant for several months to over two years.

“I have two kids to raise — am I supposed to be a charity?” Zhang asked when I called her. She says that she’s selling the building because she’s losing money. She claims Cannon is only staying in his apartment through her good graces: “he never extended the agreement, but I still let him stay here,” she says.

Cannon is looking for allies “with some deep pockets” to buy back the building and maintain Tribes in its current state, only charging artists an amount that would cover the maintenance costs, which he estimates at $3,000 a month. The building is listed for $2.9 million; Tribes’ annual budget is approximately $150,000. He’s had some interest, he says, but no solid offers.

“If he wants to get someone to buy the house, go ahead. I’m not stopping him,” says Zhang. She wouldn’t comment on Cannon’s tenancy, saying it will be up to the next owner to negotiate with the tenants, and that the building is being sold “as is.”

Cannon counts such art world luminaries as the Jay Tilton gallery, Salon 94 and the artist Steve Hammons among his supporters, and it seems like every other day a visitor spontaneously donates $200 to $1,000. While Cannon would like to regain ownership of the building, if he can’t his main concern is staying in his home and being able to continue Tribe’s work.

A COUNTER-CULTURAL TRADITION
The story of how Cannon came to buy the townhouse may explain why he’s been so generous with other young artists with uncertain prospects. In 1970, he was homeless, and at a friend’s suggestion called up West Village realtor Arnold Warwick to ask if he could stay a month in his building. Warwick offered to sell him the building instead, and gave him ten years to pay off the mortgage.

Deanna Choice, a self-taught painter, met Cannon when she was living in a shelter on East 4th Street years ago. In 2004, Choice’s paintings were shown in “Art Around the Park” an annual show Tribes organizes in Tompkins Square Park, which led to a scholarship at the New York Studio School. She drops in on Steve now to see how he’s doing.

Phil Hartman, the owner of Two Boots Pizzeria, who has collaborated with Cannon on the Howl! Festival, recently hosted a “Save The Tribes” day, donating the entire day’s proceeds at Two Boots’ seven Manhattan locations — over $7,000 — to Tribes. “Tribes is one of the last places left that carries on the great counter-cultural tradition of the East Village/Lower East Side,” he says. There will be another fundraiser May 29 hosted by the jazz pianist Jason Moran.

Even if Zhang or the future owner honors Cannon’s agreement, it only covers his tenancy through 2014. But supporters, though low on funds, are optimistic. Grunthauer says, “I’m confident Tribes will survive” regardless of the building’s fate. Choice echoes: “This kind of place doesn’t exist in the United States for emerging artist. It’s needed.”