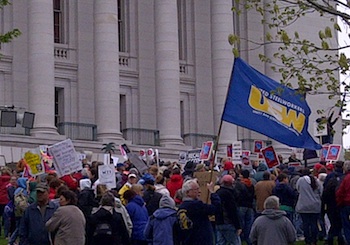 Wisconsin has been transformed in the past three months as a result of the ongoing struggle against Gov. Scott Walker’s attack on public-sector unions and his draconian budget proposals.

The last large labor protest took place March 12 following a month-long mobilization that saw hundreds of thousands of union members, students and supporters protest at the Capitol building against Walker’s attempt to drive through legislation to gut public-sector bargaining.

While the anti-union law is tied up in the courts, union officials and Democratic politicians have focused on the effort to recall Republican state senators to try to derail Walker’s agenda. But Walker and his allies remain on the offensive, pushing legislation that would curb voter turnout, slash social spending and implement Arizona-style attacks on immigrants.

Nevertheless, the resistance continues. Once empty windows in houses all around the capitol city of Madison display handmade signs with slogans like “We won’t pay for their crisis.” Union cabs still honk in rhythm to the chant “This is what democracy looks like” as they navigate Capitol Square. Bars and coffee shops are filled with political debate. And there continues to be a profound sense of pride and solidarity, both in Madison and around the state.

But how much has really changed, and how much farther does Wisconsin have to go? The answer you get depends on who you talk to. If one thing is certain, though, it’s that the popular struggle in Wisconsin is far from over.

On May 14, “We are Wisconsin,” a coalition created by the state AFL-CIO, called a demonstration at the Capitol. People eagerly turned out from across the state. It was the biggest rally since March, with a crowd estimated at 15,000. Several contingents marched from various locations to join the rally, including students, state workers from AFSCME locals, Madison teachers, and Voces de la Frontera, an immigrant rights group based in Milwaukee.

But the rally illustrated both the strengths and the weaknesses of the Wisconsin struggle. “We’re trying to build a movement,” said George Martin, a well-known antiwar activist. “The attack has pushed the buttons of all people, and we need to come together to be stronger than we are. We’re all getting hurt. We have to go beyond recall.”

Martin was supposed to be a speaker at the rally, and had planned on talking about the cost of war and its impact on state budgets. But after he arrived from Milwaukee, he was denied his slot at the podium. Although Martin would not discuss the matter, it was speculated that he was removed from the speakers list because his message was too radical.

Instead, most speakers focused on the electoral recall efforts against six Republican Senators.

“This is the last time I expect to see any of you in Madison,” Wisconsin Democratic state Sen. Jon Erpenbach told the crowd. He said that it was the duty “Wisconsin Democrats” to go to their hometowns and canvass for the recall elections.

However, the rhetoric changed when local activist and lawyer Ben Manski took the podium and passionately called for democracy in Wisconsin. He led the excited crowd in a chant of “We reject your budget.” An undocumented student also spoke and called for affordable and accessible education.

The atmosphere was one of revitalization as people talked about flashbacks to the protests in February and March. But beneath the jubilant surface that came from being back in the streets, there was also an underlying frustration.

“It’s kind of a mixed feeling,” said Mike Imbrogno, a member of AFSCME Local 171, as he reflected on the rally. “Up until three months ago, what happened on Saturday would have been unheard of. That, I think, is inspiring. Part of what this movement has done is challenge people to look at things differently. But at these rallies, it’s like ‘here we go again-‘ It’s been so long since mobilizations like this happened, but when they are set-pieces for the unions and Democrats, it’s frustrating.”

Like Imbrogno, there are many Wisconsinites who want more than electoral solutions handed down from union leaderships and politicians. Imbrogno said that his local sees the rally as an opportunity to rebuild the rank and file.

“Potentially, it means the revitalizing of the labor movement in a bottom up sort of way,” Imbrogno said. “It could potentially throw out the old model of doing things, and create a new fighting labor movement. As activists in our local, our job is to raise questions about other models of organization.”

Recently, many grassroots coalitions have formed in Wisconsin to combat the Walker budget. Some of these groups, like the new coalition Wisconsin Resists, have joined with U.S. Uncut, to plan local direct actions. These actions are usually attended by only a couple hundred activists, but tend to be much more radical and militant than the larger rallies.

Recent actions included “Tax the rich day,” and “Reverse robin hood day,” where activists marched on local banks, demanding fair taxation and shutting down banking business for up to an hour on certain occasions.

In addition, University of Wisconsin (UW)-Madison students briefly occupied their administration building before the end of the semester in opposition to a part of the budget proposal that would spin off UW-Madison from the rest of the UW System. The spin-off would result in a tuition increase and less transparency and accountability within the university.

Despite all of these efforts and the historic uprising of February and March, the political attack against working-class Wisconsinites intensifies.

Last week, the legislature passed a bill requiring a current photo ID to vote. This bill will prevent many students, minorities and those with low incomes from casting a ballot. Another piece of anti-immigrant legislation is also being proposed by state Rep. Donald Pridemore–a copycat of Arizona’s SB 1070 that would institute racial profiling in Wisconsin.

Several dedicated protesters continue to attend senate sessions. Oftentimes, they give impromptu, heartfelt speeches on the spot in a desperate effort to express their opposition. Frequently, they are forcefully removed from the Capitol building. “People want to fight but we have to consolidate our efforts,” Imbrogno said.

Already, some collective efforts have been successful. The governor’s attempt to strip public-sector unions of collective bargaining rights remains tied up in court. Also, efforts to recall certain Republican senators are underway and preliminary signatures have been filed calling for a recall election.

Despite the frustration, the struggle in Wisconsin continues with varying degrees of militancy. As similar struggles spring up around the country, they create the potential for a stronger, more unified fightback against both state and federal budgets. Whether or not our efforts will be successful depends on the small-scale organizing that is already happening in the schools, workplaces, and unions in Wisconsin and beyond.

“Things aren’t dying down,” said local college student activist Jon Mack. “There is action. There is a broad coalition of friends and neighbors standing together getting ready to fight back.”