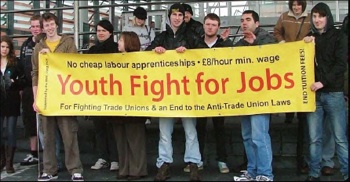 One great irony of the youth-led revolt in the Arab world is that the two shining successes, Tunisia and Egypt, were previously stellar examples of neoliberal policy.

Egypt had made the World Bank’s top 10 “Reformers” list for four of the last five years. IMF Director (and accused rapist) Dominique Strauss-Kahn praised Tunisia in 2008 as a “good example for emerging countries.”

But the inability of an economic model based on privatization, deregulation and liberalization of capital to provide for youth and the population in general has only been magnified by the global economic crisis. Neoliberalism thus created the very agents of social revolution that toppled Western-backed dictators in Tunisia and Egypt.

So while the Arab Spring of peaceful mass protests has given way to a bloody summer, youth protest is not likely to subside any time soon or remain confined to the Arab world. That’s because global capitalism today cannot provide young people with the kind of bright future they want and deserve. Adding to the pain is the lack of even a semblance of democratic institutions in most countries.

According to the International Labor Organization, youth unemployment in most of the world hovers around 20 percent with “young people … nearly three times as likely as adults to be unemployed.” In Tunisia, 46 percent of college degree holders lack jobs in their field. In Egypt, the Ministry of Investment was reduced to advertising to foreign capital the availability of 325,000 university graduates who enter the job market every year. In Nigeria, the youth unemployment rate is estimated at 49 percent, leading one journalist there to call it “a time bomb waiting to explode.” In Italy the unemployment rate among youth is 28 percent, in France 25 percent and in Spain 40 percent. In the United States, the official unemployment rate among youth aged 16 to 24 is 19 percent, but the real rate is at least 25 percent.

Having caused widespread youth unemployment,neoliberalism’s architects then use it as a pretext for “reforms” that gut labor protections and rights, ensuring that young people who do find some work will be faced with intensified exploitation. The New York Times offers the case of Southern Europe, where businesses “are loath to hire new workers on a fulltime basis, so young people are increasingly offered unpaid or low-paying internships, traineeships or temporary contracts that do not offer the same benefits and protections.”

Many unemployed and underemployed youth are highly educated, and not only in Arab countries and Southern Europe, where “the most highly educated generation in the history of the Mediterranean hits one of its worst job markets,” according to the Times. Even in dynamic capitalist economies like China, the number of college graduates has been growing much faster than the labor market can absorb them. With numbers of young people feeling left out of their own future, youth protest is on the rise in Europe and the United States. Reporter Peter Coy writes in BusinessWeek that the specter of such protest haunted the 2011 World Economic Forum. The conference halls were filled “with can-do talk about improving employment opportunities for the young,” but Coy soberly admits, “[c]hronic youth unemployment may not be fixable.”

Another factor in youth protest in the West, beyond the systemic lack of work, is the question of access to and quality of higher education. Coy writes, “In the most-developed nations, the job market has split between high-paying jobs that many workers aren’t qualified for and low-paying jobs that they can’t live on.” More funding and opportunities for higher education might address the gap, but government policy in Europe and North America points in the opposite direction. Political elites are imposing austerity and neoliberal reforms to make the young, like working people, pay for a crisis they did not cause. The rich get bailouts designed to rescue the value of stocks and bonds, and youth get much higher tuition fees for an education that is declining in quality as budget cuts take a bite.

Across Europe free higher education is becoming a thing of the past even as student enrollment has surged in the last decade. Last December, Conservatives in England tripled the cap on tuition, while Italy’s right-wing Berlusconi government cut $425 million from the university system, which students protested by occupying the Leaning Tower of Pisa and the Coliseum in Rome. Many other European countries are initiating the same process of gradual privatization that has been unfolding in the United States for decades.

The creeping privatization of higher education in the United States has led to record student loan debt levels of $830 billion, exceeding total credit card debt. Writing at CommonDreams.org, researchers Alan Nasser and Kelly Norman note the debt is “growing at the rate of $90 billion a year” and only “40 percent of that debt is actively being repaid.” They warn student loan debt may become the next bubble to burst, further complicating any economic recovery. Far from addressing this issue, austerity policies aggravate it.

As Americans lose their jobs and see their income decline, they find that public colleges are filled to capacity even as they continue to increase tuition. Many students turn to for-profit colleges that often prey on students from minority backgrounds, charging high tuition rates for programs that often lead to lower-paying jobs than those available to public college graduates. As a result,  students attending for-profit colleges are far more likely to default on student loans than those attending public higher education institutions.

The first major protests against the economic crisis in the United States involved University of California students resisting austerity policies. In September 2009 students, faculty and staff organized walkouts and strikes at the 10-campus system after being hit with layoffs, cuts and 32 percent tuition hikes. In Wisconsin, it was a student walkout in Madison that sparked the massive worker resistance there and around the country. Remarkably, students at the University of Wisconsin-Milwaukee engaged in a 66-day occupation against cuts and fee increases to the state system before being evicted May 7.

Dramatic battles have taken place in Puerto Rico, where public university students protesting austerity shut down 10 of the 11 campuses last year. Right-wing Gov. Luís Fortuño upped the ante last December by imposing a tuition increase of more than 50 percent and sending in police to occupy the main campus in San Juan. This led to more occupations, a faculty and staff strike, and a public protest of more than 15,000 that led to the police withdrawal in February.

The solidarity among young people, students and workers has been central to growing movements in Europe, the Arab world and North America. Faced with a bleak future, young people the world over are debunking the myth that they are apathetic and politically immature.

Costas Panayotakis teaches Sociology at CUNY’s New York City College of Technology and is the author of Remaking Scarcity: From Capitalist Inefficiency to Economic Democracy, which will be published by Pluto Press in September 2011.