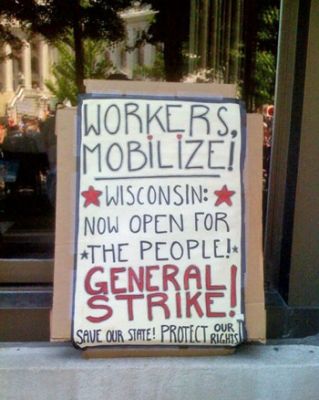 About 1,000 protesters demonstrated at the capitol in Madison, Wisconsin, at noon on Monday to kick off a week of renewed protests against Gov. Scott Walker and his budget.

But just as the bitter cold couldn’t crush the spirit of Wisconsinites when the protests began this winter, the heat isn’t wilting them, either.

Former Sen. Russ Feingold shook hands with some of the protesters at the beginning of the rally, which may fuel speculation that he is considering running against Gov. Walker in any recall election that might come.

Brian Austin held a sign that said, “Cops for Labor.” A forty-one-year- old police officer, he said, “I’m here to protest against the budget, which is horrifyingly wrong for Wisconsin and for the institutions we hold dearest.” Since the beginning of the protests back in February, Austin says police officers have been putting in twelve-to-sixteen hours shifts, and then joining the demonstrators. Walker’s attempt to divide police officers and firefighters from the rest of the public- sector workers “hasn’t worked since day one,” says Austin. “If anything, it’s brought us closer as citizens.”

Protesters chanted, “This is what democracy looks like,” and a big van alongside the square tooted its horn to the beat of the chant.

“How do you fix the deficit? Tax, tax, tax the rich,” the crowd went on.

When it approached M&I Bank, whose executives gave money to Walker, the crowd swarmed in front of the doors, forcing the bank to close. “The banks got bailed out. We got sold out,” the crowd chanted.

The police and bank security officers pushed protesters away from the door.

“I was holding the door open and the cops shoved me to the ground,” says Karen Tuern, 42. “They bloodied my toe and scuffed my elbow.”

Once the police had finished clearing the bank of protesters, the crowd chanted: “Next time around, we will shut you down.”

After four months of protesting, the heat is beginning to rise.

This article was originally published on Progressive.org.