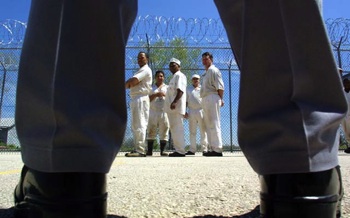 A decision expected today from the U.S. Sentencing Commission could potentially free thousands of inmates convicted of crack felonies, if the commission decides to apply retroactively Congress’ 2010 reform of drug sentencing laws.

The Fair Sentencing Act, signed into law in August 2010, was an effort to reduce the huge disparity in punishment of those convicted with cocaine possession or use versus those caught with crack. The law gets rid of so-called “mandatory minimums” and knocks down the disparity in length of sentences from 100-to-1 to 18-to-1. So punishment for crack offenders is now 18 times as harsh as it is for cocaine offenders.

“We hope that they will support full retroactivity for the over 12,000 people that would be eligible,” says Jesselyn McCurdy, a lawyer with the American Civil Liberties Union (ACLU).

The last outcome is what Texas Republican Lamar Smith and some of his colleagues are hoping for. Smith is one of several who wrote a letter to the commission coming out against retroactivity. Early release, his letter says, “merely gets criminals back into action faster.”

But there’s no evidence that keeping people in jail longer will prevent recidivism. In fact, precedent suggests the opposite is true: In 2007, when the Sentencing Commission last retroactively reduced the length of sentencing for some crack offenders, “recidivism was slightly less than average,” McCurdy says.

Moreover, McCurdy points out, all 12,000 individuals will have to go before a judge who will decide whether to release them, based on a number of factors like behavior in prison or their records. “A judge can say, ‘No, this particular person doesn’t deserve to benefit from retroactivity.’ “

McCurdy says Attorney General Eric Holder’s personal testimony was an encouraging sign. While he only advocated for limited retroactivity, “He came and testified himself. We felt like that was a signal this was an important issue for him.”

She added that Holder was “bucking the trend,” and a letter from the Association of Assistant United States Attorneys in opposition to retroactivity is a sign Holder is facing internal pressure. (The main argument of that group seems to be that U.S. attorneys worked hard to put these people in jail, so don’t let them out.)

A decision in favor of retroactive application would mean more than just giving 12,000 inmates an opportunity to plead for release. Prisoners who were arrested and charged before Aug. 3 of last year—when the Fair Sentencing Act was signed—are in limbo because courts aren’t sure whether to sentence them at the old 100-to-1 rate or the new 18-to-1 rate. This decision could clear that up.

And, perhaps even more important, McCurdy says a decision to reduce prison numbers would be “a great step forward to breaking the addiction this country has to incarceration.”