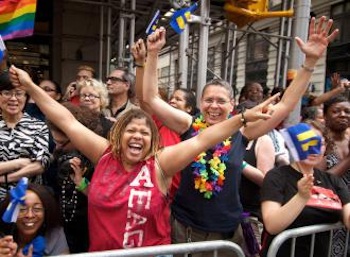 On June 24–almost 42 years to the day after riots at the Stonewall Inn in Manhattan gave rise to the modern LGBT rights movement–New York became the sixth state where same-sex marriage is the law of the land.

This is a tremendous step forward in the struggle for marriage equality–arguably its biggest achievement yet–and it has already begun to reinvigorate the national LGBT movement.

The Marriage Equality Act passed the state Senate by a vote of 33 to 29–it passed the state Assembly by a comfortable margin the previous week–and was signed into law that same night by Gov. Andrew Cuomo. Lesbian and gay couples can begin to marry when the law goes into effect in 30 days–on July 24.

This makes New York the sixth and largest state where same-sex marriage is legal. Massachusetts, Vermont, New Hampshire, Connecticut, Iowa and the District of Columbia also sanction marriage equality. In California and Maine, statewide referendums in 2008 and 2010 reversed previous same-sex marriage victories, setting back the movement.

But these defeats–especially in California, where the anti-gay marriage Prop 8 won by a narrow margin on the same Election Day that Barack Obama captured the White House–spurred a nationwide struggle that blunted other attempts to stop gay marriage and gave rise to a new generation of activists who have set their sights on full marriage equality and much more besides.

The victory now in New York after several previous defeated efforts is testament to that struggle. For the millions who organized, protested, petitioned and otherwise supported marriage equality, this is a sweet moment–the culmination of a long fight. New York must now provide the hundreds of rights, benefits and protections currently limited to opposite-sex couples.

Coming right before LGBT Pride weekend in New York, the decision has begun pumping up an already celebratory mass of revelers into an excited frenzy. Hundreds who heard of the news of the vote Friday night headed down to Sheridan Square in the Village, where the original Stonewall riots took place. People waved rainbow flags, chanted, kissed, hugged, and danced jubilantly.

Friday’s senate vote was a stark and welcome contrast to 2009, when same-sex marriage was defeated, even though the senate was controlled by the Democrats. The measure lost by a 38-24 vote, with eight Democrats joining all 30 Republicans in opposition. The defeat was accompanied by a similar failure in New Jersey.

But over the last two years, polls have consistently shown a majority of New Yorkers in favor of marriage equality. A 2004 Quinnipiac poll found that 37 percent of New York State residents supported gay marriage. By this year, that number had risen to 58 percent.

This time around, New York Democratic legislators were virtually unanimous in their support for the marriage equality legislation–save one, the notorious Pentecostal minister Rubén Díaz of the Bronx, who has made stopping marriage equality his personal political crusade.

On May 15, Díaz organized a hate-filled Bronx rally against same-sex marriage, featuring one speaker, Rev. Ariel Torres Ortega, who said that gays are “worthy of death.” Not only was Díaz the chief voice in the Senate against marriage equality, but leading up to its passage, he co-sponsored a bill to strip same-sex couples married elsewhere of their legal recognition in New York.

Groups against marriage equality with innocuous-sounding names, such as the New York State Catholic Conference, New Yorker’s Family Research Foundation, New Yorkers for Constitutional Freedoms, the National Organization for Marriage and the Christian Coalition, pressured state senators to vote against the bill.

Behind-the-scenes wheeling and dealing stalled the legislation for nearly a week past the official end of the 2011 legislative session. The bill was held up not only by political maneuvering, but by wrangling over “legal protections” for religious groups.

The claim that churches would be forced to perform same-sex weddings was a red herring since the calls for marriage equality included no such requirement. Nevertheless, lawmakers took a week squeezing language into the bill that guarantees the right to discriminate in various ways. Because of the last-minute rush to vote last Friday night, it isn’t yet clear which provisions made it into the final version of the bill.

New York City Mayor Michael Bloomberg and Gov. Cuomo are being hailed as heroes for showing more backbone than is typical for politicians on this issue–though with public opinion on the side of same-sex marriage, especially in New York City, it wasn’t an unpopular stand.

While Bloomerg’s lobbying of Republican state senators was welcomed by LGBT rights activists, his past appeal of a marriage equality legal victory in 2005 led to the postponement of this victory. And of course, this is the same mayor who is cutting meals and housing assistance to people with AIDS, and cutting aid meant to help runaway homeless youth stay safe and off the streets.

Likewise, Cuomo, though he has been pushing for the same-sex marriage legislation since taking office this year, has been willing to compromise with homophobic senators to pass draconian budget cuts that hurt LGBT people, along with other New York residents.

Unfortunately, the media are unlikely to credit those who have been organizing toward this victory for years. A continuous stream of pro-equality protests, from Queens to the Bronx, and Albany to Rochester and beyond, turned up the heat on lawmakers to finally act. New York unions devoted resources to the campaign with phone banking, and a number of labor leaders spoke out publicly for the legislation during the course of June.

The victory for marriage equality in New York raises questions about the issue at the federal level.

After all, the rights and benefits won with this new state law don’t include 1,049 federal rights and benefits, including Social Security, Medicare, health care and others. The Defense of Marriage Act (DOMA), passed under President Bill Clinton, barred federal recognition of same-sex marriages even in states where they are legal.

Barack Obama has promised to work toward repealing DOMA, but he has done little to act on this pledge–and in fact, his Justice Department went to federal court to defend DOMA during his first year in office.

Obama certainly hopes to use this issue as his upcoming reelection campaign looms. This week, he promised LGBT supporters that if they voted for him in 2012, he would write a “new chapter” in the struggle. But as Rachel Maddow of MSNBC noted, “President Obama is against what just happened.” She’s right–Obama claims he supports the overturning of DOMA, but that he’s personally against marriage equality. The anti-LGBT forces behind Proposition 8 in California in 2008 were quick to seize on Obama’s statements in a series of campaign ads.

The pressure from the New York victory can revitalize the struggle at the federal level. And what’s more, though marriage equality has been at the cutting edge of the LGBT movement for the last decade, there are many more fights ahead. It’s still legal to discriminate against LGBT people in housing and employment in a majority of states, which is why the Employment Non-Discrimination Act to prohibit workplace discrimination on the basis of sexual orientation or gender identity remains a pressing issue.

In New York state, the Gender Expression Non-Discrimination Act, a civil rights bill to protect transgender people, who are often the most victimized segment of the LGBT community, should be a new area for activism.

Fortunately, what happens in New York isn’t likely to stay in New York. This victory will catapult LGBT rights into the national spotlight once again. It’s important for everyone who cares about justice and equality to take advantage of this opportunity while it lasts.