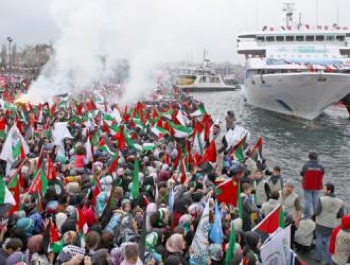 Hundreds of Palestine solidarity activists in ports on the Mediterranean Sea are making final preparations to sail in defiance of the siege of Gaza, despite pressure and sabotage by Israeli forces determined to stop them.

But as the planned departure date of June 28 came and went, several aspects of Israel’s offensive against the flotilla came to light.

First, the U.S. boat in the flotilla, named The Audacity of Hope, had an “anonymous” civil complaint, later revealed to be the work of the Israeli group Shurat HaDin, filed against it with the Greek government, claiming it wasn’t “seaworthy.” On June 27, Greek officials inspected the ship, but haven’t issued their findings yet.

The Gaza Freedom Flotilla 2 is expected to be made up of about 10 vessels carrying hundreds of volunteers from more than a dozen countries. For months, people around the world have been organizing to send humanitarian aid, letters of support and people to make the voyage–as a means of asserting the right of Palestinians in Gaza to control their own borders.

On Monday, however, Israeli military spokesperson Lt. Col. Avital Leibovitz made the outlandish accusation that there “are radical elements on board the American boat who have said they want to kill Israeli soldiers.” In fact, a significant proportion of the American boat is made up of Jewish activists and others committed to nonviolence. Leibovitz also claimed that one boat was “carrying dangerous incendiary chemicals” to be used against soldiers.

Earlier on June 27, a boat in a Greek port that was to carry Greek, Swedish and Norwegian passengers had its propeller axle cut in an act of sabotage, and on June 30, activists who are sending an Irish ship to Gaza announced that their boat, the Saoirse, which is docked in a Turkish port, had also been subjected to an act of sabotage.

Israeli officials have also admitted that they organized the filming of a short video, promoted on the Internet, that falsely accused flotilla organizers of refusing to allow a gay Israeli to join the flotilla because of his sexual orientation. The assertion was quickly unmasked as a slander, but absorbed the efforts of activists for some time.

But the most potent weapon so far seems to be Israel’s threats to back out of economic deals with Greece, including a joint gas pipeline in the eastern Mediterranean, at a time when the Greek government is teetering on the brink of default.

Among the U.S. activists participating in the flotilla, there is a keen sense of determination.

“I grew up in the South under segregation, under the state terrorism of apartheid,” said Alice Walker, explaining her decision to join the freedom flotilla. “When I was in the West Bank and Gaza recently, it was like stepping back into that…Humanity cannot bear this.”

Hedy Epstein pointed out the obvious hypocrisy of Israel’s claim that it has withdrawn from Gaza, yet the people of Gaza don’t have any say over the flow of goods and people into and out of the territory.

“I want to talk to you on a compassionate level,” she told a reporter. “I’m Jewish, I was born in Germany, I left when I was 14 years old. My parents perished in the Holocaust…[Gaza] is the largest open air prison in the world…Israel says it’s out of Gaza, but it controls the air, land, and sea.”

Israel has launched an international campaign to pressure Mediterranean governments to forbid the departure of any boats bound for Gaza. It also issued blunt threats against the flotilla, pledging to use any means necessary, including snipers and attack dogs, to stop the ships from reaching Gaza.

Unsurprisingly, U.S. politicians from across the political spectrum lined up to pledge support to Israel. For example, Sen. Mark Kirk (R-Ill.) called for the Obama administration to “make available all necessary special operations and naval support to the Israeli Navy to effectively disable flotilla vessels before they can pose a threat to Israeli coastal security or put Israeli lives at risk.”

Secretary of State Hillary Clinton expressed the full support of the U.S. State Department for Israel’s twisted logic–insisting that the flotilla was counterproductive to the goal of improving the conditions faced by Gaza’s 1.5 million Palestinians.

“We do not believe that the flotilla is a necessary or useful effort to try to assist the people of Gaza,” Clinton asserted at a June 23 State Department briefing. “Just this week, the Israeli government approved a significant commitment to housing in Gaza. There will be construction materials entering Gaza, and we think that it’s not helpful for there to be flotillas that try to provoke actions by entering into Israeli waters and creating a situation in which the Israelis have the right to defend themselves.”

Clinton’s points are laughable on several levels. First, there is the idea that Israel has suddenly decided to help build up Gaza, rather than encircle, strangle and bomb it. Then there’s the suggestion that by sailing to Gaza, the flotilla would enter “Israeli waters.” Clinton, of course, knows full well that the flotilla activists are committed to the strategy of nonviolence, are aboard boats carrying nothing but humanitarian aid, and don’t pose any threat to Israeli forces or the state of Israel.

The real provocation is Israel’s illegal occupation and siege of Gaza–and if any party in this conflict has shown its preference for violence and law-breaking, Israel has. One year ago, it attacked a major international flotilla to Gaza–and shocked the world when its commandos killed nine Turkish aid activists and wounded dozens more.

As Palestinian writer Ali Abunimah put it, “By invoking Israel’s supposed ‘right to self-defense’ against civilian boats trying to reach Gaza, we must understand that Clinton is telling Israel the United States will not stand in the way of another military attack.”

Clinton’s statement about the flotilla followed two other official warnings, including a travel advisory a day earlier that referred to Israel’s violence during the last flotilla without condemning it.

“U.S. citizens are advised against traveling to Gaza by any means, including via sea,” the travel warning reads. “Previous attempts to enter Gaza by sea have been stopped by Israeli naval vessels and resulted in the injury, death, arrest and deportation of U.S. citizens. U.S. citizens participating in any effort to reach Gaza by sea should understand that they may face arrest, prosecution, and deportation by the government of Israel.”

Ray McGovern found the warnings ominous. “What we see here is a joint Israeli-U.S. effort to bring pressure on all people, and especially now the Greeks, to make sure that we are headed off, that we are not able to exercise our right–and it is our right confirmed to us by the consulate general here in Athens–to sail to Gaza,” said McGovern.

“Never in my 48 years in Washington have I seen three warnings, three official advisories, issued on three consecutive days on the same issue: Americans must not go by sea to Gaza–if they do, it’s their own fault what happens.”

Around the world, activists stand ready to take to the streets in solidarity if the flotilla is attacked or barred from sailing to Gaza–and so should you.