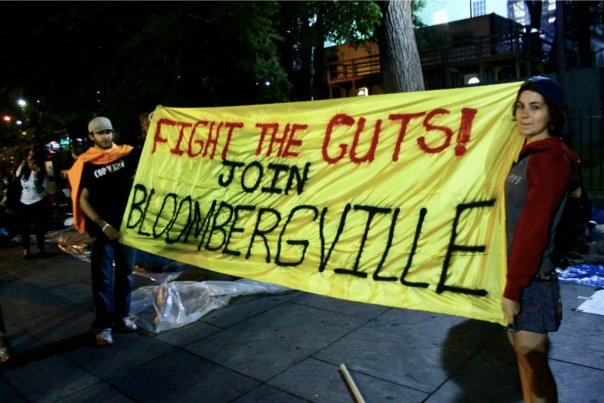 It’s 7 am on a Saturday morning and a row of sleeping bags wraps around the base of the Woolworth Building from Park Place onto Broadway. Covered from the elements by scaffolding, two dozen bleary-eyed campers (including this reporter) slowly wake up amid stacks of empty pizza boxes and a scattering of homemade protest signs.

Welcome to “Bloombergville”, a protest encampment launched on Tuesday June 14 to protest Mayor Michael Bloomberg’s efforts to cut hundreds of millions of dollars from vital government programs and services and lay-off thousands of city workers. Located across the street from the south end of City Hall Park, Bloombergville’s population fluctuates but its residents share a sense of outrage about the mayor’s proposed cuts and a determination to do something more than hold the usual protest rally.

The people of Bloombergville can’t enter City Hall where their elected representatives will soon pass judgment on the Mayor’s proposed cuts. They also can’t bring their protest encampment to any part of City Hall Park, an 8.8 acre oasis in which City Hall is ensconced.

“That’s New York,” says Larry Hales, an unemployed college graduate and a member of the Bail Out the People Movement. “If you are a Wall Street banker, you have access to Bloomberg whenever you need it. But if you are from the boroughs and are a worker or a student or a teacher, you can’t even get to the steps of City Hall.”

So instead, Bloombergville residents find themselves occupying parts of two sidewalks (or about 900 square feet of Downtown Manhattan real estate), an act upheld by court rulings that sleeping outside is a constitutionally protected form of free speech as long as no permanent structures (including tents) are utilized. A collection of small left groups are participating under the banner of New Yorkers Against Budget Cuts. The majority of the protesters, like Hales, are in their 20s or 30s, face a future of limited job prospects and see a political system disconnected from the concerns of ordinary people. They derive inspiration from the Arab Spring and recent mass occupations of public space from Madrid to Madison, Wisconsin as well as the Hoovervilles of the 1930s.

“This is an all-out war on public sector services and workers,” says Doug Singsen, a graduate student at the City University of New York who also adjuncts at Montclair State (NJ). “It’s a historic restructuring of our society. They are taking away things that have been fundamental parts of our social structure for decades. Something of this magnitude requires an all-out response.”

Demonstrations at Bloombergville are lively and spirited and have featured appearances by everyone from City Councilmember Charles Barron to the Rude Mechanical Orchestra. But so far, turnout has peaked at around 200 people. On Saturday afternoon, the mayor was coronated in abstentia as the “King of Bloombergville” (where there are no term limits) and protesters have vowed to present his crown to him at his Upper East Side mansion if he doesn’t accept it.

Hounded first by the police and then by bad weather, the encampment was moved twice before landing at its current home. It now has a regular routine in which demonstrations are held daily at noon and 6 pm and a “General Assembly” is convened at 10 am and 8 pm. These meetings are open to all participants in Bloombergville. During these meetings, the workings of the encampment are reviewed and discussed and plans for future actions are made (and remade). Personal conversations can run late into the night.

“Talking with someone at four in the morning you have been struggling with for four days to hold a street corner is a very different conversation than one you would have at a protest rally,” says Yotam Marom of the Organization for a Free Society.

If, as Woody Allen once said, 90 percent of life is just showing up, then Bloombergville has been a success. However, it is so small at times that it resembles a private gathering. And even its largest protests to date have lacked the kind of mass participation that it would enable it to be more than a sideshow to negotiations currently being carried out behind closed doors.

A number of groups that participated in the 20,000-person strong May 12 demonstration against city budget cuts dropped out of Bloombergville just before it began last week. “They are trying to cut deals with City Council and they don’t want to antagonize them,” a source close to the organizing of Bloombergville told The Indypendent.

Budget talks are currently hinging on discussions among the leaders of city unions over whether to hand over $400 million from the Healthcare Insurance Stabilization Fund in order to forestall layoffs, an “alternative” proposal being pushed by City Council Speaker Christine Quinn, a close ally of the mayor. The fund was created in the mid-1980s to cushion against increased healthcare costs for city workers but has rarely been used.

Bloombergville participants have little patience for lobbying or deal-making or the other accoutrements of business-as-usual politics. Their critique is a systemic one. When I asked several protesters if they had called their individual city councilmember to press their concerns, they said they had not. The focus, instead, is on the politics of street protest and popular mobilization. And while Bloombergville’s impact is likely to be limited this year, participants hope they are setting the stage for bigger, bolder actions in the future.

“These attacks are going to continue after this year,” Hales said. “This is part of building a movement.”