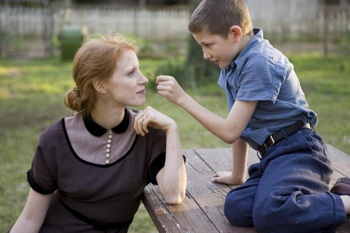 After more than two hours the film The Tree of Life ends and the words, “written and directed by Terrence Malick” appear on the screen. In response, people boo and clap. I see faces struck with awe and twisted in frustration and realize the film is a Rorschach test. Like the famous psychological test where patients were shown ink blots; the film is a watercolor of cosmic imagery and American family drama that invites projection. And what we see in the reaction is our own buried anxieties about class.

The film itself is innocuous. The fifth directed by hermit-like director Terrence Malick, it is a juxtaposition of the fiery origin and death of the earth with the rise and fall of a Texan family. But according to Entertainment Weekly, at the Cannes Film Festival last month people were “shoving and hollering to gain entrance.” Why this passion over a film? It’s because art has two functions: an act of expression by the artist and an act of consumption by the audience. When the people at Cannes elbowed their way in to The Tree of Life and days later, I bought my ticket; we were buying the experience of elitism.

The film begins with Jack O’Brien, a somber man played by Sean Penn on the anniversary of his brother’s death. He stares up at his sterile glass towers and the film cuts to the first light of creation, beaming into the void as the sun ignites and the earth casts its shadow into space. Life begins as cells divide and transform into jellyfish then dinosaurs. Just as it seems this 20-minute detour could go on forever — an asteroid hits the planet and we are back with the family. Brad Pitt plays Mr. O’ Brien the hard-jawed father terrorizing his family. The mother, Mrs. O’ Brien, played by Jessica Chastain shields her three sons, including young Jack played by Hunter McCracken, and shows them how to find rapture in life. Little dialogue exists. Instead the camera floats dreamily around the actors who show a subtlety of emotion rarely seen in American film.

However the question is not if the movie deserves critical acclaim. It’s what else do we gain when we buy the tickets? The Tree of Life has the aura of a masterpiece whose treasure only the knowing can apprehend. Buying things to show status is as old as necklaces found on ancient skeletons and pharaoh tombs stuffed with gold. And so is the critique of it beginning with the Prophet Isaiah in eighth century B.C. decrying the worship of false idols. What is modern is how we buy not things but “experiences” to prove our status. According to French sociologist Pierre Bourdieu’s book Distinction: A Social Critique of the Judgment of Taste; we often consume art to prove our ability to consume an elite social code.

When we bought tickets to The Tree of Life we purchased the right to perform our cultural competence needed to understand Malick’s dreamy modernist epic. The pleasure the film gives is an elitist one. It re-affirms how much cultural capital a viewer has. Sitting in the dark theater, viewing the Big Bang and DNA coiling into life we inherit centuries of science and feel like we are a part of the grand narrative of human progress. We inherit a sense of our separateness from the masses. Art-house films and theaters are sites of social reproduction of ruling class legitimacy; they recreate class hierarchy through aesthetics.

And yet when the movie ended, I saw the world through Malick’s eyes — my shadow on the sidewalk or the swell of moonlight in the clouds seemed like small miracles. It was then I realized that aside from its social role, art transforms perceptions. It can liberate us from the daily routine that deadens the mind. Despite the status seeking elitism that drives a segment of the audience to see it, the film is a gift. It opens the senses and political change is impossible without first transforming how we experience the world. I stood in the street, gasping in awe at a how a tree swayed or at faces illuminated by the flash of car headlights — and realized the world itself was a Rorschach test. On it we can project all the beauty we have missed, all the freedom we have lost.