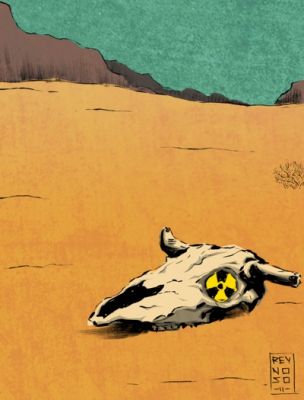 In the 2008 edition of his book Uneven Development: Nature, Capital, and the Production of Space, Neil Smith might have been writing about Japan and its ongoing nuclear crisis in the following passage: “while many states have variously unhitched themselves from responsibility for the social reproduction of their national populations, they have selectively rendered the state apparatus as its own entrepreneurial entity, a purer catalyst of capitalist expansion than ever before.”

The nuclear meltdowns that began with the 9.0 magnitude earthquake and tsunami on March 11 have highlighted the Japanese government’s role in brokering nuclear technology contracts, uranium mining deals, and massive subsidies for its utilities and other nuclear energy-related corporations despite its desperate attempts to render such ties invisible.

This relationship has been reinforced by government statements that it will most likely have to “join TEPCO in ensuring that responsibilities [compensation] are fulfilled.” Chief Cabinet Secretary Edano stated “it is also the government’s responsibility to ensure that all the people who have been affected are provided with appropriate indemnity for their losses.”

The crisis that hit the Tohoku region, Japan’s underdeveloped northeast that includes Fukushima prefecture, is a reminder of the economic role unproductive spaces play. These spaces fit into the framework of overdevelopment and underdevelopment of physical space that is central to the capitalist economy. Tohoku itself is a product of the back-and-forth flows between fixed capital, the built environment of roads, ports, factories, energy facilities, and government services, and mobile capital. Tohoku is also affected by the related cultural construction of the region as a backwater, which began in the mid-19th century and continues to the present.

These unproductive spaces, which Valerie Kuletz terms “zones of sacrifice” in her book, Tainted Desert: Environmental and Social Ruin in the American West, often overlap with other spaces — rural spaces or newly built industrial-scientific complexes — that serve to resolve energy crises caused by cities through building nuclear and other power plants.

Kuletz writes that these zones are “desirable because of their undesirability.” They will remain central to the global landscape until the disposal of industrial waste is resolved. They are desirable for their function of capital accumulation, but at the cost of inflicting violence upon peoples who inhabit the zones.

Tainted Desert is a powerful and heartbreaking analysis of the intentional ruin of Native American reservations in the West by the nuclear industry, the U.S. government, the military and scientific establishment since the 1940s. Kuletz proposes “nuclearism” as a form of internal colonialism that feeds off and exacerbates political and economic inequalities between regions — geographical, cultural and racial/ethnic — within a given society.

Nuclearism relies on a practice of deterritoriality — the indifference by modern nation-states and the international community toward particular lands or regions and populations that inhabit them.

Zones of sacrifice are pieces in the global puzzle of energy exploitation. They link areas like Nevada’s Yucca Mountain, an unfinished “permanent” nuclear waste disposal site, to uranium mines in indigenous lands in Northern Saskatchewan, Western Australia, Namibia, Niger and Gabon. The zones include Kazakhstan, “an engine of global uranium production” in the words of one analyst and targeted by Japan’s Ministry of Economy, Trade and Industry as a new source of uranium; Rokkasho village in Aomori prefecture, Japan’s own nuclear reprocessing site; Tsuruga city in Fukui prefecture, which houses Japan’s only operational fast breeder reactor; England’s Sellafield nuclear reprocessing complex, which reprocesses Japanese reactors’ spent nuclear fuel; and the U.S. military’s Cold War-era nuclear weapons facility in Hanford, Washington.

These sites are where raw material extraction, waste disposal, nuclear testing and radioactive contamination tend to occur. For communities in these areas, workers often have no other option than to toil in these health-sapping industries, and everyone is forced to live in the toxic spaces. Within these landscapes multinational corporations engage in “co-siting,” which means housing many dangerous facilities together because, as Colin Macilwain recently reported in Nature, “the only communities that will accept new nuclear plants are those that already have them.” Powerful government agencies like the U.S. Department of Energy, the Pentagon and the Japanese Ministry of Economy, Trade and Industry serve as defender and benefactor to the corporations, helping secure local permission to build the facilities and providing massive subsidies to municipalities and contracts to companies in order to realize these locally undesirable but nationally “necessary” projects. (Macilwain lays bare the absurdity of co-siting: “Not only are all the reactors exposed simultaneously to the same dangers — whether flood, earthquake, war or terrorist attack — but radiation release at one reactor or fuel tank could cripple recovery efforts at the others.”)

“Zones of sacrifice” rely on vague rhetoric about shared sacrifice that obscure the vested interests that benefit from establishing these spaces while rendering invisible the concrete sacrifices forced upon humans and non-humans occupying those lands. In the process, these regions-turned-wastelands are sacrificed for the broader requirements of national security, international stability and the pursuit of scientific knowledge. The lands may be rendered uninhabitable, but their value to the nation-state, industry and science are great.

Another characteristic of the zones of sacrifice is that despite the site-specific nature of nuclear power plants and waste facilities, nuclear pollution permeates boundaries — even as boundaries are extremely useful for doling out subsidies and compensation and for assigning responsibility for crisis management.

In post-3/11 Japan, this permeability, real and imagined, is destabilizing and anxiety-inducing for communities living in or near designated zones. Thus, the zones provide a stability that does not reflect the reality of radioactive fallout. Prime Minister Naoto Kan’s establishment of zones of radioactivity from ground zero to the three-kilometer absolutely no-reentry zone, the broader 20-kilometer danger zone where one-time supervised reentry is permitted, the 30-kilometer zone where residents are strongly advised to stay indoors and “always be prepared for an emergency situation,” and the six-prefecture Tohoku region as a whole (of which the cities of Miyagi and Iwate incurred much greater casualties and damages than Fukushima) are administratively useful and easily mapped. But they cannot account for shifting patterns of fallout.

Of the 20-kilometer zone in Fukushima prefecture that includes Futaba, Okuma and Tomioka cities and six other municipalities, the three-kilometer ring around the Daiichi plant will likely not be actively redeveloped by the state. This is a “zone of sacrifice.”

The three-kilometer zone may no longer available as a space in which capital accumulation can take place, but what of the wider 20-kilometer zone: will it, threat of radiation and all, be converted into territory available for capital, which untiringly seeks to manage crises of over-accumulation of capital by re-organizing space? What about the space around Japan’s 54 nuclear power plants, many of them located in areas vulnerable to hurricanes, tsunamis, and earthquakes, especially if Japan turns away from nuclear energy? What implications does this crisis have on the ability of mobile capital to settle on new sites? And if Japan’s government eventually resuscitates nuclear power, what will happen to these communities that host these facilities now revealed to be current or eventual nuclear wastelands?

For the nuclear industry, a shrinking terrain upon which capital can deterritorialize and reterritorialize is a limited obstacle. That area is by no means unprofitable in the short term. Nuclear-energy companies have organized themselves into three multinational conglomerates: Toshiba-Westinghouse, Hitachi-GE and Mitsubishi-Areva. They control 90 percent of the global nuclear industry from uranium mining to plant construction, and they have quickly regrouped after 3/11 to devote their profit-making energies to the inevitable stage of all nuclear power plant construction, the decommissioning process.

While the Tokyo Electric Power Company may find it hard to recover from this crisis — it will have to shell out tens of billions of dollars for decommissioning and compensation to victims, unless the public is forced to pick up the tab — at least one of the nuclear giants will prosper. Each one has already submitted proposals for decommissioning. Included in these plans are Fluor and the Shaw Group, two well-known profiteers of disaster capitalism in Iraq and the Gulf Coast. It would be ironic if either Toshiba or Hitachi receives this decommissioning contract, as both were involved in the development and supply of the reactors that are at the root of the nuclear crisis today.

Anti-capitalist struggles brought forth or revitalized by this current crisis requires a recognition of the key role that these multinationals have played in producing the nuclear crisis in Japan, and will play in the post- 3/11 reconstruction process in Fukushima and beyond. Their strategies of capital accumulation by dispossession may have destroyed the concrete spaces from which struggles tend to emerge, but has at the same time, produced a common starting point for resistance.

Wendy Matsumura is an assistant professor of History at Furman University.