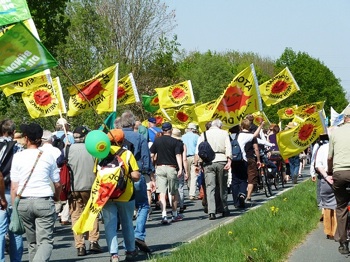 Berlin, Germany — German Chancellor Angela Merkel signed off today on a ‪bill‬ phasing out all nuclear energy in Germany by the end of 2022, underscoring the economic and environmental benefits of this shift.

Merkel had announced the decision last Monday (May 30) after more than 100,000 people protested nuclear energy in over 20 cities across Germany on May 28. In Berlin alone, over 20,000 demonstrated.

Merkel’s decision marks a reversal of her previous policy. Last fall, she had announced that she would extend the life span of nuclear plants by 12 years on average.

Yet in the face of the Fukushima Daichi Nuclear Power Plant disaster in Japan in March and increasing and widespread public opposition to nuclear energy in Germany, she changed her mind, announcing that German would take the seven oldest of its 17 nuclear power plants off the grid for three months, conduct a safety review of its nuclear power plants and review its energy policy.

A precedent for her most recent nuclear policy had been set in 2000, when the Alliance 90/The Greens — a coalition government of the Social Democratic Party (SPD) and the Green Party — decided to phase out nuclear power plants by 2020.

Eon is also considering filing a lawsuit against the continuation of the nuclear fuel tax. The tax was introduced as a part of austerity measures ratified last year. It will raise funds to help the German government reduce its public debt. When Merkel announced her decision to phase out nuclear energy last week, she stated that the nuclear fuel tax would remain on the books, increasing the ire of the four leading energy firms.

The four energy firms furthermore warn that Germany could face widespread winter blackouts if Merkel phases out nuclear power. But a recent study conducted by German Watch challenges that argument.

Merkel’s decision marks a major shift in nuclear energy policy that could have worldwide implications, given that Germany is the largest developed country to phase out nuclear energy and is the world’s fifth largest consumer of nuclear energy in terms of megawatts consumed, after the US, France, Japan and Russia.

Merkel is not alone in her retreat from nuclear energy. Just a week prior to Germany’s decision, after anti-nuclear demonstrations of 20,000 people, Switzerland, too, decided to shelve plans to continue nuclear energy.

The country’s five existing reactors will remain in operation until the end of their lifespan, with the last one being decommissioned in 2034. Nuclear energy provides about 40 percent of Switzerland’s current energy, needs that Switzerland states will be met by increased renewable energy.

And in Italy, too, a referendum on nuclear energy stands before the voters. Following the Chernobyl disaster in 1987, Italy shut down its four nuclear power plants. Prime Minister Silvio Berlusconi reversed this decision in 2008.

Although Berlusconi, too, announced a moratorium on his plans for new nuclear power plants in response to Fukushima, he intended to carry out the construction of new plants. Yet last week, the Italian Appeals Courts announced that elections will take place this weekend, on June 12 and 13, with a referendum on Berlusconi’s nuclear power on the ballots.

Later this month, June 28-29, the first European regulatory conference will take place to discuss safety regulations and also the challenges the nuclear industry in Europe will face over the next 10 years.

Merkel’s decision raises some vital questions. How will Germany phase out nuclear energy? What will pick up the slack? How much will renewable energy expand? How quickly? And who will pay?

The answers to many of the questions about how Germany will transition away from nuclear energy can be found in Germany’s “Energy Concept for an Environmentally Sound, Reliable and Affordable Energy Supply,” unveiled last September, in which the government laid out its energy policy for the period up to 2050.

Through this new energy policy, Germany intends to cut greenhouse gas emissions by 40 percent by 2020 and by 80 percent by 2050, with 1990 being the base year for both measurements.

To achieve these reductions, Germany will ramp up renewable energy sources. Its new energy policy says “renewable sources are to account for the biggest share in this future energy mix.”

In order to reduce overall electricity consumption, buildings will be renovated and upgraded to increase efficiency.

Additionally, wind energy will play an increasingly key role in electricity generation. Onshore and offshore wind power will be expanded.

According to the Oeko-Institut (the Institute for Applied Ecology) the amount of electricity derived from renewable energy in Germany could even be doubled from its intended rate of 18 percent to 35 percent by 2020.

In an interview with Earth Island Journal, Jan Burck, Senior Adviser for Climate Change Performance, Germanwatch, upped the ante, saying, “renewable energy could even reach 40-45 percent by 2020. It is entirely a question of what one funds.”

Which raises an important question vis-à-vis Merkel’s announcement: Will phasing out nuclear energy and ramping up renewable energy increase energy costs? And if so, who pays?

The Germany Ministry of Environment’s aforementioned fall 2010 “Energy Concept” study calculated Germany’s future energy costs based on three potential scenarios: modest, moderate, or steep price increases for fossil fuels. If there is a modest price increase, the study argues, renewable energy would become economically viable by 2030. If there is a moderate increase in the price of fossil fuels, renewable energy could become competitively priced as soon as 2020.

When considering costs, it needs to be considered, Burck argues, “that many nuclear and coal power plants are already nearing the end of their lifespan and require new investments and that electricity grids need to be updated. So it is a question,” he adds, “of whether one continues to invest in these power plants or shifts investments into renewable energy.”

Municipal utility companies, by contrast, have been ramping up investments in renewable energy, mainly wind and solar. And they are seeing the returns for these investments.

Renewable energy is being funded through a variety mechanisms. In 2000, Germany passed and implemented the Renewable Energy Act (Erneuerbare-Energien-Gesetz, EEG). It was designed to protect the climate and to reduce reliance on fossil fuels, while increasing renewable energy usage by making it cost competitive. There is no direct subsidy made by the government. And the industry does not pay. Instead, the consumer pays.

Through their monthly energy bills, consumers pay a small percentage, which then fund renewable energy. For a household of two person, these costs run about 10 € ($ 14.60) per month. This guarantees a security of investments made. It has been particularly effective in allowing small and medium-sized municipal energy companies to get into the renewable energy market, reducing costs of producing renewable energy, and in turn, of consuming it.

Additionally, through a feed-in-tariffs program, consumers who install renewable energy, such as solar panels or a wind turbine, and who generate energy in excess of what they consume through these renewable sources, can sell the excess energy and feed it back into the grid, in return for compensation. According to Burck, “the payback of this combined system is clear, for the larger investor and the smaller investor.”

The United States, by contrast, relies on tax credits, which are a notoriously fickle way to fund renewable energy, since they are not reliable and need to be renewed. Investors thus shy away from funding renewable energy to a larger extent than they would if consistent funding were available. Lacking funding creates a cycle, whereby costs are not brought down, thus consumers do not increase use.

Aside from costs, concerns have been raised about how Germany will meet its energy needs in the future. Will it have to import more energy? If so, what kind? Nuclear energy from France? More coal from Poland? More gas from Russia?

Germany, like Italy, lacks fossil fuels, so Germany already imports 80 percent of its energy. Currently, most of its electricity is generated through coal and nuclear energy. Germany’s coal is primarily imported from Poland. Since Germany does not have uranium — needed to produce nuclear energy — it, too, is imported.

Could Germany’s retooling prove useful for rethinking US energy policy? Last month, German and US energy experts met in Berlin for the 3rd German American Energy Conference. According to Katherina Reiche, press secretary for Germany’s Federal Ministry for the Environment, “”Germany and the United States are facing the same energy policy challenges. Both countries have to modernize their energy systems and make them more efficient.” The countries discussed political and technological approaches to re-tooling energy.

If Germany can manage a retool given a reliance on nuclear energy comparable to that of the US, then what is stopping the US from phasing out nuclear energy and seriously ramping up renewable energy?

Tina Gerhardt is an independent journalist who covers climate change, international negotiations and energy policy. Her work has appeared in Alternet, Grist, Environment News Service, In These Times, The Progressive and The Nation, on GRIT tv, WBAI and the National Radio Project.

This article was originally published by Earth Island Journal.