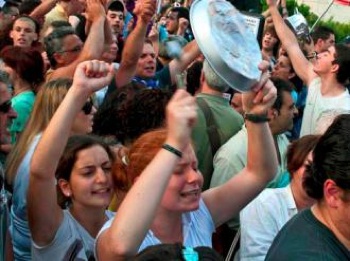 Across borders, and in many languages, the world’s political leaders and business elite have the same message for working people: You’re going to have to live with a lot less, for good.

But since the beginning of the year–in Athens’ Syntagma Square and the Plaza del Sol in Madrid and Tahrir Square in Cairo and even Capitol Square in Madison, Wis.–there’s been an answer back from working people: No!

Each of these struggles has been through high points and low points, victories and setbacks. When millions of Egyptians celebrated the fall of the dictator Mubarak in February and looked forward to an end to repression and neoliberalism, the struggle in Greece seemed to be experiencing a lull. Now that millions of people are mobilized in Athens and other Greek cities, the battle in Wisconsin is going through a difficult phase.

But taken together, all these struggles have made 2011 a year of resistance–one that has brought millions of people into political activity for the first time and laid the basis for ongoing protest. This worldwide fightback, in all its forms, is revitalizing and reshaping working-class organization and politics–and underscores the need to build the left and socialist organization internationally.

As the second half of 2011 begins, the center of the fight is Greece.

The country’s center-left government is working with unelected European bureaucrats and the International Monetary Fund to impose a second set of sweeping austerity measures–this on top of last year’s program that included higher taxes, lower pay and sharply reduced social services. The country’s parliament voted in favor of the new cuts on June 29.

European governments are ratcheting up the pressure on Greece for fear that even a partial default on its $471 billion debt would create a domino effect in the continent’s banking system. Some banks would have to write down the value of Greek loans on their books, forcing them to restrict lending or even go under. Others would be required to pay out tens of billions of dollars in complicated insurance payments that would be triggered by a default.

So for the bankers and the politicians they control, the answer to the crisis is obvious: Workers have to pay–and keep paying until the capitalists’ problems are solved.

If they think they can get away with it, it’s because Greek Prime Minister George Papandreou and his PASOK party did succeed–despite a series of one-day general strikes and countless protests–in imposing drastic austerity measures a year ago in exchange for a $157 billion bailout.

But that money bailed out the financial system, not Greek workers, who endured a drastic cut in their standard of living. If the government’s claim that tough measures were needed persuaded many last year, this year is another story, as Panos Petrou, of the socialist group Internationalist Workers Left, pointed out in an interview with SocialistWorker.org:

This attitude has changed over time. First of all, it became clear that the rich aren’t going to pay a single cent, and this feeling of injustice has fueled the class anger. Then came the realization that the cuts will keep coming unless we react. Countless times, the minister of finance reassured the public that there would be no more sacrifices. But new austerity measures kept coming.

Austerity was supposed to lower labor costs in Greece and stimulate the economy. Instead, the cuts have only sent the Greek economy spiraling downward while the debt burden keeps mounting. The amount Greece owes is expected to reach nearly $500 billion by 2015–which would mean an ever-increasing share of Greek economic output going to repaying the banks.

But after a year of suffering, Greek workers have had enough. Now, union protests are taking place amid an even broader mass movement of the aganaktismenoi, or “indignants,” who are occupying Syntagma Square outside the parliament building and other public squares around the country.

The Greek protesters were inspired by the mass encampments in Spain’s plazas, led by young “indignados” fed up with unemployment rates of 20 percent and social service cutbacks. The Spanish protests were themselves modeled on the occupation of Tahrir Square in Cairo–the symbol of the movement that overthrew Hosni Mubarak. And that struggle for Tahrir had an echo in the U.S., when hundreds of thousands of workers and their allies rallied in Wisconsin for the better part of a month last winter against anti-union legislation.

And these are only the most recent and dramatic manifestations of the resistance. In Iceland, after months of protests, voters in a referendum in April rejected the government’s call to repay $4.8 billion to British and Dutch banks to cover those governments’ cost of a bailout of Icelandic banks. Last November, Portugal saw the biggest general strike since the country’s 1974-75 revolution. A few weeks later, Britain saw the largest student protests in decades–and a one-day strike of three-quarters of a million public-sector workers is set for June 30.

Thus, the battle over austerity has gone global, just like the financial crisis and recession that prompted it.

To rescue banks and corporations of all sorts, governments around the world handed trillions of dollars to CEOs and wealthy corporate bondholders. Now, these governments are determined to make workers pay for that bailout with lower wages, higher taxes, delayed retirements, diminished but costlier health care and more expensive education.

The anti-austerity struggles, as powerful as they are, haven’t yet been able to turn the tide. Papandreou got his vote on a new round of austerity this week, in spite of the upheaval. Likewise, In France last fall, a series of dramatic strikes and mass protests–the most widespread since the general strike of 1968–failed to stop a proposal to raise the retirement age.

This shows how determined the capitalist class is in pushing its program despite mass resistance–and the politicians are obliging them, whether they’re conservatives like French President Nicholas Sarkozy and British Prime Minister David Cameron, or “socialists” like Spanish Prime Minister Jose Luis Rodriguez Zapatero and Greece’s Papandreou.

“When I went into this crisis, I said my basic goal in this position is to save Greece and reform Greece,” Papandreou said last year. “And I don’t care if I am not re-elected.” In other words, it’s going to take a much higher level of struggle to defeat the austerity agenda, given the stakes for big capital.

But Greek workers are increasingly conscious of that, and they’ve stepped up the pressure. The 48-hour general strike in both the public and private sector on June 28 and 29 signals a new stage in the struggle.

The austerity agenda is reshaping U.S. politics as well, though at a different pace. The rationale is the same–public-sector workers and retirees are supposedly “living the good life at taxpayers’ expense” and draining the public treasury with “gold-plated pensions and benefits.” Where the European austerity program is being driven by a cabal of bankers and unelected bureaucrats, their American counterparts are in a bipartisan alliance, with Democratic officeholders joining their Republican counterparts to slash social spending and roll back the rights of public-sector unions.

The struggle in the U.S. is far smaller compared to that in Europe, much less the rebellions and revolutions across the Middle East. But the fightback has begun.

The mobilization of workers and students in Wisconsin this past February and March was one of the largest mobilizations in recent U.S. history, and the spate of smaller anti-cuts actions around the country since point to the possibility of ongoing campaigns to defend social services and the public-sector workers who provide them.

Building the resistance will require patient organizing that continues between the big protests. Working people in the U.S., as in Europe, find that the political parties they’ve traditionally supported are either carrying out the attacks directly or doing nothing to stop them.

But the European struggle over the past few months has also shown that smaller fights can turn unpredictably into bigger ones. The crucial lesson for those who want to see those struggles succeed is to be prepared to take the struggle forward when the opportunities arise.

For their part, the unions, accustomed to backroom deals with employers and supposed political allies, are now confronted by a capitalist class that has raised the stakes dramatically. While their responses in various countries have been different–European union leaders have been more willing to mobilize than U.S. ones–organized labor has still not faced up to the reality that employers are out to gut their power.

That’s why it’s important to build the left in the fight against austerity measures. To revive as fighting organizations, the unions need networks of militants organized to build the struggle on the ground.

Whether in the U.S. or Europe or elsewhere around the globe, mainstream politics today offers a choice of only which kind of cuts to accept. The case for an alternative–a socialist society, based on workers’ democracy and meeting human needs–will find a growing audience among those in the new resistance.