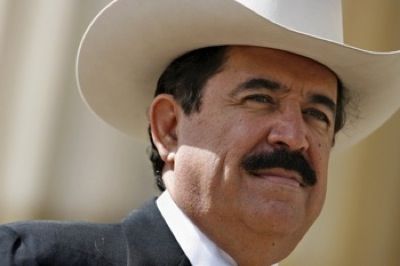 While most in the United States were recognizing Memorial Day with a three-day weekend, the people of Honduras were engaged in a historic event: the return of President Manuel Zelaya, 23 months after he was forced into exile at gunpoint in the first coup in Central America in a quarter-century. While he is no longer president, his peaceful return marks a resounding success for the opponents of the coup. Despite this, the post-coup government in Honduras, under President Porfirio “Pepe” Lobo, is becoming increasingly repressive, and is the subject this week of a letter to Secretary of State Hillary Clinton, signed by 87 members of the U.S. Congress, calling for suspension of aid to the Honduran military and police.

As the only U.S. journalist on Zelaya’s flight home, I asked him how he felt about his imminent return. “Full of hope and optimism,” he said. “Political action is possible instead of armaments. No to violence. No to military coups. Coups never more.”

When Zelaya landed in Honduras, he kneeled down and kissed the ground. He was greeted by tens of thousands of people cheering and waving the black-and-red flag of the movement born after the coup, the FNRP, or National Front of Popular Resistance, “the resistance” that Zelaya now leads. His first stop: a massive rally at the memorial for 19-year-old Isis Obed Murillo, who was killed one week after the 2009 coup when Zelaya first attempted to fly back into the country. Murillo was with tens of thousands awaiting Zelaya’s return at the airport. The military blocked the runway and dispersed the crowd with live fire, killing the teenager.

Since then, violence and impunity have been constant. Farmers, journalists, students, teachers and anyone else in Honduras daring to dissent face intimidation, arrest and murder. At least 12 journalists have been killed there since the coup, according to the Committee to Protect Journalists. Scores of campesinos — small farmers — have been killed. High-school students protesting teacher layoffs and the privatization of education were violently attacked by police this week, with tear gas and live ammunition.

At the rally, Zelaya, memorializing Murillo, said, “Blood was not shed in vain, because we’re still standing …  resistance is today the cry of victory.”

The current Honduran government agreed to allow Zelaya’s return to gain readmission into the Organization of American States in an attempt to shed Honduras’ pariah status in Latin America for the coup.

Pariah to Latin America, but not the United States. Even though President Barack Obama early on called Zelaya’s ouster “a coup,” the U.S. government soon dropped the term. But there is no other word for it. On Sunday, I spoke with Zelaya in his home. He recounted what happened.

It was around 5 a.m. on June 28, 2009, when black-hooded Honduran soldiers stormed his house after shooting through the back door.

“They threatened me, that they were going to shoot,” he said. “And I said to them: ‘If you have orders to shoot, then shoot me. But know that you are shooting the president of the republic.’ … They forced me to go to their vehicles outside with my pajamas on. We landed in the U.S. military base of Palmerola. … And then to Costa Rica.”

Ultimately, more important to Honduras is not just the return of Zelaya, but the return of democracy. Zelaya was gaining popular support for policies like a 60 percent increase in the minimum wage, the plan to take over the U.S. Palmerola air base and use it as the civilian airport in place of the notoriously dangerous Toncontin International Airport, plans to distribute land to peasant farmers, and to join ALBA, the regional cooperative bloc developed to diminish the economic domination of the United States. On the day he was deposed, Zelaya was holding a nonbinding straw poll to assess if the population wanted to hold a national constituent assembly to evaluate possible changes to the constitution. That, he explains, is why he was deposed.

Secretary of State Clinton and close friend Lanny Davis, who is working as a powerful lobbyist for the coup regime, have pushed hard for the legitimization of the current Lobo government, despite Clinton’s own State Department cable titled “Open and Shut: The Case of the Honduran Coup,” released by WikiLeaks, that the coup was clearly illegal.

As I headed to the airport to leave Honduras after this historic weekend, I passed a group of teachers, one month into their hunger strike outside the Honduran Congress. They, like a broad network of civil society groups in Honduras, while celebrating the return of their ousted president, are clear in their demand, now joined by 87 members of the U.S. Congress, for an end to violence and repression in Honduras.

This article was originally published on Democracy Now!.