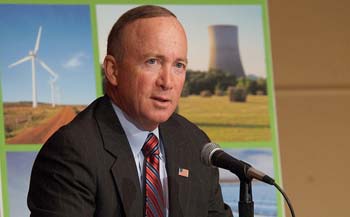 In early May, Indiana Governor Mitch Daniels signed one of the most draconian anti-choice laws in the country, HB 1210. Among other heinousness, the law codifies what radical anti-choicers call ‘fetal pain,’ and requires a woman who has already decided to have an abortion to gaze at ultrasound images and listen for the flutter of a fetal heartbeat right before the emotionally charged procedure.

HB 1210 also strips existing and future Medicaid payments from “any entity that performs abortions or maintains or operates a facility where abortions are performed.” (Hospitals are exempt.) For those who don’t speak Radical Republicanese, “entity” means “Planned Parenthood,” which runs 28 health centers across the state.

Proponents in the Hoosier House and Senate insist that Medicaid users won’t suffer because they have plenty of reproductive healthcare options. But according to the Indiana “Journal Gazette,” that’s kinda not true. Of an April 27th hearing, the paper reported:

“Minutes before the Indiana House voted on the bill to defund Planned Parenthood and other health care providers, two lawmakers backing the bill held up a handmade map covered in colored dots. The map, they said, showed [clinics] that could bridge the gap if Planned Parenthood lost funding. … ‘In every circumstance but one, there is another provider nearby,’ Rep. P. Eric Turner, R-Cicero [said].’

The list provided by House Republicans and on their website includes health service providers that have nothing to do with women’s reproductive health, sexual health or family planning. They include a Salvation Army addiction center, a homeless shelter, several mental health centers, a juvenile detention center and the Indiana Women’s Prison.”

Perhaps sensing that homeless shelters and prisons aren’t the most appropriate source of Pap smears and clinical breast exams, the feds intervened. In a June 1 letter, Dr. Donald Berwick—the Obama appointee who heads up the Centers for Medicaid and Medicare Services—told Indiana officials that the law violates Medicaid patients’ legal right to choose their health care provider.

Although the feds could withhold some $4 million in family planning grants, Indiana isn’t backing down. Bryan Corbin, a spokesman for state attorney general Greg Zoeller, told Chicago’s WBEZ-91.5, “We are reviewing the Center for Medicaid Services letter with our client, the Family and Social Services Administration to determine our client’s options, but we will continue to defend the statue.”

While Indiana’s anti-abortion Republicans (and a select few Democrats) dig in their heels, thousands of people who use Medicaid to pay for birth control, STD testing and treatment, cervical cancer screening and breast exams are at risk.

I asked PPIN’s president and CEO Betty Cockrum to weigh in this latest attack on the nonprofit. Lightly edited excerpts of our exchange:

How does the state ban on Medicaid funds for Planned Parenthood of Indiana fit into the big anti-choice picture?

Cockrum: It’s very clear that when Congress voted against de-funding Planned Parenthood on the national level, anti-choice groups switched their focus to the states. Here in Indiana, there was a defunding measure that had died, only to have [its] language amended into another bill. This happened after efforts to cut off federal funding failed. Other states are seeing similar attempts, so it does appear to be part of a national strategy to force Planned Parenthood to stop doing abortions in order to receive public funding.

The law focuses on abortion, but won’t these Medicaid cuts limit people’s access to other health services like STD testing and prevention?

Cockrum: Let’s be clear. Abortion has absolutely nothing to do with public funding of Planned Parenthood Indiana. The $1.4 million in Medicaid reimbursements PPIN receives each year are only for preventive care—services such as Pap tests, breast exams, STD testing and treatment and birth control. Not a penny of the funds goes toward abortion. The Hyde Amendment already prohibits the use of federal funds for abortion. So, what the state of Indiana has done is effectively cut off 9,300 Medicaid patients from their preferred provider of reproductive health care.

So if a woman on Medicaid comes in for, say, her birth control pills, she’ll be turned away?

Cockrum: PPIN [has been] covering the costs of established Medicaid patients’ care in our health centers. However, we cannot afford to do so indefinitely—we are only able to continue because of the huge outpouring of gifts from around the nation, in response to Indiana becoming the first state where a Planned Parenthood was defunded. We worry that Medicaid patients will face barriers to STD testing and other preventive care if this law remains in effect. Supporters of the law claim there are other providers. However, it’s unclear whether they are located as conveniently as our health centers, whether they have the same patient-friendly hours, if they are accepting new Medicaid patients, and if they have waiting lists.

In your opinion, has race played a role in this?

Cockrum: Supporters of the law never mentioned race in the debate, although some opponents questioned if the legislation wasn’t being sought because it was minorities who would be most adversely affected. When asked by a reporter if this legislation was an attack on women, one of our patients responded, “It’s an attack on the ‘hood.” She went on to say that it’s those in lower-income neighborhoods who are being most affected—neighborhoods where there are often minorities.

Click here for Cockrum’s reaction to the federal assist.