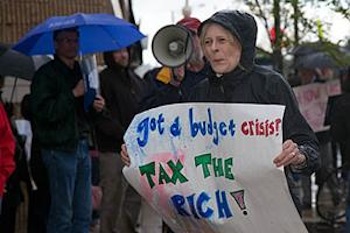 While today’s report of nonexistent job growth has the media in a tizzy, working people didn’t need the latest temperature check to tell them the economy’s still flat-lining.

But somehow the debate in Congress still isn’t about how we’re going to get people back to work or bring homeowners back above the water line. Beltway politicians from both sides of the aisle can’t stop talking about government deficits and the national debt.

Do these twin issues actually threaten our national well-being? There’s a two-part answer: No, not much, compared with the wailing in Washington. Yes, but both are fixable if Congress would go where the money is.

Leading the charge is Representative Paul Ryan, who wants to cut $4.5 trillion in government programs over the next decade. His “Path to Prosperity” claims the sky is falling and that unchecked government spending is the problem. Ryan’s solution is to privatize Medicare and have the poor take the brunt of the cuts, about two-thirds in total.

The fiscal tug-of-war nearly forced a federal government shutdown. What’s in store once 2012 electioneering kicks into high gear could be even worse.

There is no question federal deficits in recent years have been high by historical standards—about 10 percent of total economic activity (Gross Domestic Product, or GDP). In the 35 years prior to the financial meltdown, deficits averaged about 2.5 percent of GDP.

But since the 2008 economic collapse, government has been running up red ink. Together these annual deficits have added to the national debt, which will top $10 trillion by year’s end.

Is the problem as bad as Ryan and others claim?

Not really, because the main drivers of today’s deficits are temporary. They include:

The Congressional Budget Office says the annual deficit will drop considerably as the economy recovers, to average about 3.3 percent of GDP by 2013. This is lower than Reagan’s deficits, which averaged 4.2 percent.

Steady deficits, even small ones, can build up to create large-scale debt. Conservatives point to Greece and warn of eventual U.S. default.

But if they were serious about avoiding the apocalyptic scenarios they predict, they’d acknowledge how we got here: Bush’s tax cuts and war spending, which wiped out the surplus the country had 10 years ago.

Pull back from those expenses and the national budget looks a lot prettier.

Instead, conservatives are pushing to undo the paltry financial regulations put in place last year to avoid another meltdown and locking in the Bush tax cuts that mostly benefit the richest 1 percent.

It’s easy to believe the nation is broke when most state and local governments are in a hole.

But the country isn’t broke. Tax policies allow some people to hoard huge wealth—which would be available to fund schools, firefighters, and bridge repairs if politicians had the will to tax corporations and the rich.

Last year corporate profits exploded, jumping 29 percent to $1.65 trillion. CEO salaries saw a similar bounce, and Wall Street executives raked in $21 billion in bonuses, the fifth-highest payout ever. Individual taxes, particularly on the wealthy, are lower than they’ve been in 60 years.

The GAO, the federal auditing agency, said recently that two out of every three corporations are paying zero federal income taxes, and most of the Fortune 500 pays a lower proportion of their earnings in federal taxes than working people.

Just enough wealth is lavished on politicians to ensure those fortunes stay in corporate coffers and billionaires’ bank accounts. That’s why most states are choosing draconian cuts.

State governments are forbidden by law to run deficits, they’re abandoned by Washington, and they’ve shouldered the recession’s costs, like unemployment insurance and services for 25 million people who can’t find work (or enough of it). Most say there’s no alternative but to cut.

Oregon proved states can go the other way: a 2010 referendum backed by a union-community alliance saved essential services by increasing taxes on corporations and the top 3 percent of earners. Oregon’s richest angrily vowed to move out of state, but surveys show they’ve stayed put.

Medicare is indeed extremely expensive, and getting more so. But that’s because of double-digit cost increases in the overall health care system. Medicare is sideswiped by that, even though its administrative costs are a fraction of the costs of for-profit insurance.

Medicare’s problem is that government controls too little of the health care system. If Medicare covered everyone, the government could save big time by cutting out the bloated insurance industry and negotiating lower costs for drugs and care.

Unfortunately, the Obama administration, along with most of Congress, showed no appetite for confronting insurers, for-profit medical chains, and pharmaceutical companies in the 2009 health care reform debate. Imagine where we’d be if they had.