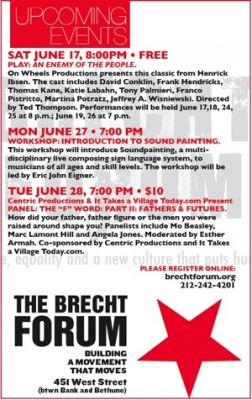 SUN JUNE 12
12:30pm • Free
MEETING: RADICAL EDUCATORS BOOK CLUB. Educators and those interested in pedagogical practices are invited to come discuss the book What Does it Mean to Be Well Educated? by Alfie Kohn. Kohn’s book questions how we determine what “well-educated” means and how such a standard is decided in our society. Bluestockings, 172 Allen St
212-777-6028 • stina@riseup.net

TUE JUNE 14
6-7:30pm • Free
ACTION: FAIR FOOD POTLUCK. Stand with the workers of Mario Batali’s Del Posto Restaurant as they protest illegal practices in their workplace, such as wage misappropriation and discrimination, with a just food potluck. Bring your favorite food that is grown, sold or served by workers treated with dignity to show the owners of Del Posto what just food looks like.
Del Posto Restaurant, 85 10th Ave
917-514-7027 • jeff@rocny.org

6:30pm • Free
ACTION: SLEEP OUT. Opponents of the Mayor’s proposed budget cuts will begin a week-long sleep out on the sidewalk outside City Hall immediately following a rally by DC 37. Sleep out, speak up and fight back against bailouts for the rich and austerity for the rest of us.
Centre St. (btwn Chambers and Spruce Sts)
nocutsny.wordpress.com

SUN JUNE 19
10:30am-12:30pm • Free
event: PEACE RIDE TO STATEN
ISLAND MUSEUM OF TIBETAN ART. Times Up! invites cyclists of all ages to join them on a ride through Staten Island to visit the Jacques Marchais Museum of Tibetan Art. The ride will also stop at the historic house of Alice Austen and Fort Wadsworth.
Staten Island Ferry Terminal
timesup.org

7pm • Free
PANEL: DETAINED WITHOUT CAUSE: MUSLIMS’ STORIES OF DETENTION AND DEPORTATION IN AMERICA AFTER 9/11. Irum Sheikh, author of Detained Without Cause, an oral history of citizens detained in the post-9/11 Islamophobic
hysteria, joins attorneys Martin Stolar
and Sandra Nichols for a discussion of oppressive law enforcement tactics.
Alwan for the Arts, 16 Beaver St
646-251-0402 • alwanforthearts.org

1pm • Free
PROTEST: NYC RALLY TO BAN FRACKING. As part of a statewide action against the controversial natural gas extraction process known as fracking, a number of local organizations are holding a large rally to demand a permanent ban on fracking, the creation of green jobs and the replacement of fossil fuel and nuclear energy production with renewable, clean energy sources.
Foley Square
888-552-6570 • nofrackny.org

Sign up to receive our weekly calendar via email at indypendent.org.