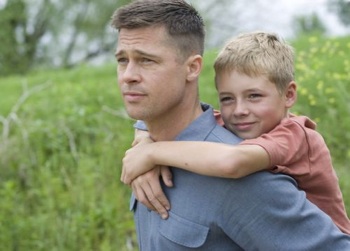 The Tree of Life
Directed by Terrence Malick
Fox Searchlight, 2011

Fresh from its triumph at the Cannes Film Festival, Terrence Malick’s formidable, much-anticipated The Tree of Life proves a vastly ambitious work, striving to give meaning to the human condition by reconciling the evolutionary and the biblical takes on our place in the scheme of things. As to be expected, it also adheres to a radically nostalgic worldview. None of Malick’s films (this is his fifth in almost forty years) are set later than the 1950s, and the flash forwards to present-day Houston appear as virtual reality, filtered through the perspective of a dead man (Sean Penn) and testament to a world gone to the dogs. (The residual yet anemic beauty Malick attributes to the branchless, skyscraping trees of this glass-and-steel Neverland hits a single ironic note in the oeuvre of a filmmaker who draws complexity from innocent wonder.)

The main storyline kicks in when news of the death of young Jack O’Brien – the boy Penn’s character used to be – reaches the suburban Waco home of his parents (Jessica Chastain and Brad Pitt). Malick uses their mourning as a conduit to the time of Jack’s birth, which he sets up as a reflection of the nascent universe. From the Big Bang through the formation of our planet to the time when dinosaurs roamed the earth, an extraordinary sequence compounds the Darwinian origins of life as we know it with a variation of the Gospel according to St. John: “In the beginning was the Word,” and for Malick, the word is woman. He consistently expresses narrative subjectivity and distills the relationship of language and image through voice-over, which privileges and, in film after film, increasingly idealizes the female sphere.

Mrs. O’Brien designates the way of nature and the way of grace as the two paths to choose between in life, and Malick divides them along gender lines, identifying the latter with the mother and the former with the father figure. In an intense performance, Pitt plays a strong-willed, short-tempered wannabe whose talents (as an accomplished organ player and aspiring inventor) have not earned him longed-for distinction. The first middle-aged specimen in the 67-year-old auteur’s gallery of inscrutable, blank protagonists, he is the rebellious golden boy of A River Runs Through It (1992) matured to become an unfulfilled, emotionally stunted paterfamilias.

The scenes that show prepubescent Jack (Hunter McCracken) alternately absorb and challenge the tough love of a father he is not allowed to call ‘dad’ reveal Malick’s extraordinary visceral grasp of the survival instincts that tug at the heart of the American nuclear family. Once we have heard Jack blatantly announce that his old man wants to kill him, and in turn profess parricidal leanings, the son’s unexplained death assumes a less randomly tragic aspect. No film since Pasolini’s Edipo Re (1967) has imagined the Oedipal conflict on such a primal scale, but where the great Italian director gave it a mythical treatment, The Tree of Life takes an existential approach. (School, work, even sexuality are excised from the domestic stage.)

Notwithstanding the cosmic and philosophical ramifications – from Rousseau (man’s alienation from natural harmony) to Bergson (flux of mind and matter through memory) – the film comprises, its genius proves a measure of the razor-sharp slice of Southern Gothic that shines through Jack’s coming-of-age adventures: whether he is questioning a chained criminal’s fate or imitating a cripple’s slump on a visit to town, stealing a neighbor lady’s slip from her house, ogling black kids at a barbecue, observing a clown’s antics at a sideshow or playing with a giant shadow in the attic, his impressions breathe forth a Down Home atmosphere of strange familiarity. (Throughout, historical and regional specifics remain vague enough to suggest the timeless experience of childhood.)

The camera tends toward an equally ambivalent, at once intimate and oblique engagement with the characters, whom Malick often captures tangentially, achieving a skin-tight proximity that is purely tactile and belies their individual psyche as source of enlightenment in a pantheistic world. If the O’Brien family forms the inner circle of a universal stream of consciousness, no relationship more convincingly demonstrates that blood runs thicker than water – which flows profusely in scene after scene – than the boyhood bond between Jack and his younger brother R. L. (Laramie Eppler, whose uncanny fraternal rapport with McCracken evokes the spiritual core of a precocious Cain-and-Abel redux).

Chronologically, the central narrative thread of Malick’s latest film anticipates that of his debut, Badlands (1973), and Jack O’Brien could represent a younger version of the latter’s James Dean-inspired anti-hero, Kit Carruthers. Whether or not The Tree of Life marks the closure of a cinematic cycle, some spectators are likely to fret about the grandiloquent spirituality of its quest, especially in the dragged-out, synthesizing finale. Most, however, will marvel at the recurrent celestial overtures of sunlight through the tree crowns as an image of Emerson’s Over-Soul, and wonder when we last saw a work of art in which the physical and the metaphysical so seamlessly and believably become one.