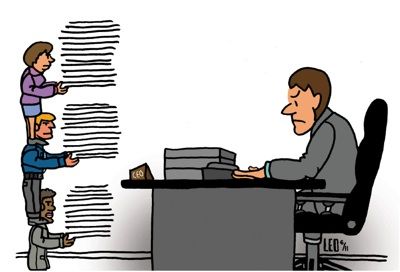 Intern Nation: How to Earn Nothing and Learn Little in the Brave New Economy
Ross Perlin
Verso, 2011

About five years ago, when I’d just graduated from college and was crashing on friends’ couches, I found myself filling out an online loan application. At the time, I let everyone who asked know that I was a photographer, and was working at an exciting start-up photo agency in west Chelsea (I neglected to add, “for free.”) My actual occupation, as evidenced by the applications I filled out for apartments or for Medicaid, was “waitress.”

Online banking, however, gave me another option. The drop-down menu next to the required question of employment status, included “employed full-time,” “employed part-time” and “intern.”

Intern? ING Direct was going to offer me large sums of money with “intern” as assurance?

The acceptance of unpaid labor as a norm by a global financial institution, not just peers and professors, in 2006, should have been a signal to me of just how deeply entrenched this phenomenon has become. The internship explosion has largely gone unexamined, however: it’s only five years later that we see the first mass-market book on the subject. Ross Perlin’s Intern Nation: How to Earn Nothing and Learn Little in the Brave New Economy investigates the depths of this phenomenon. A masterful exposé blending reporting and analysis, Intern Nation shows that internships are far more degrading and widespread than many of us thought they were — and it’s in employers’ best interest to keep them that way.

First, let’s dispense with the obvious: interns are the lowest of the low in the workplace. And to add insult to injury, while interns can shoulder a workload similar to that of an actual employee, they receive none of the commensurate protections or benefits. In Perlin’s paraphrase of the law on this issue, whether an intern is paid or not, she is a “stranger who happens to be in an office.” Interns who receive college credit rather than money fall into an even grayer area. While they’re off campus, they aren’t entitled to legal protections afforded to students, but, exempt from the minimum wage, they aren’t employees, either. Harassment suits filed by interns against former employers have been thrown out of courts throughout the country, including New York, Massachusetts and California, setting a dangerous legal precedent.

Besides their ubiquity, the most salient quality of internships is their very undefinability. Despite the internship explosion of the past two decades — which grew out of the highly-regulated field of medical internships — the Department of Labor doesn’t define or even track internships, which means statistics are nearly impossible to find. Internships, which are now a crucial part of white-collar industries, are similar to abstract art: If an employer calls something an internship, and a student calls something an internship, who’s to say otherwise?

Perlin highlights some eye-opening numbers. More than half of current college graduates have been interns at some point in their nascent careers. Perlin’s own conservative estimate places the number of interns in America right now at two million. (To contrast, there are currently 800,000 interns in France.) Whether or not they’re legal (and a New York Times article last year suggested that most current internships aren’t) they are seen as a vital stepping-stone to landing a good job, with most entry-level jobs now requiring experience — in the form of internships.

As a category of work, if you can call it that, Perlin says internships are the fastest-growing segment of the American economy. They are especially coveted in what he calls the “glamour” industries — publishing, entertainment and finance. Indeed, though most interns expect their stint to lead to paid employment, or teach them about a particular field, the purpose of many internships is to fob off mind-numbing, though vital, administrative work as a “learning experience.” Using unpaid interns saves America’s largest firms up to $2 billion a year. (Apprenticeships, on the other hand, common in blue-collar trades, involve a well-defined period of supervised paid training, followed by union membership and the option of steady work.)

One student, for her summer internship, spent 35 hours a week stuffing envelopes for a major publisher. They were able to avoid paying her since the internship was an “educational experience.” (The start-up agency where I’d interned, at its peak, contained one full-time staffer and eleven part-time interns, all of them responsible for retouching photos.)

Intern Nation includes stories of countless other interns who make up the murky underbelly of government agencies, NGOs, investment firms, publishing houses, arts organizations, television studios and legislators’ offices. These young people’s eagerness, uncertainty, desperation and, ultimately, disappointment, comes through loud and clear. It’s as an anthropological study of a Western rite of passage that this book is most compelling.

Perlin unpacks the various interests in the internship industry so clearly that I wished he’d have an equally clear solution. What’s most clear, alas, is just how good a deal internships are for everyone but the intern. Their stratospheric rise follows the broader tale of the post-industrial economy, which in the past three decades has swelled with part-time, casual, freelance and temp labor. Internships are just the latest frontier in the wild west of the de-regulating labor market.

Perlin is adamant that interns need to “stop underbidding each other” and assert their power by a show of force. I agree, and would love to see interns’ rights reach the public consciousness. And there is hope out there: The book closes with an example of how the architecture industry as a whole stemmed the growth of exploitative internships during the 1990s. Perlin suggests a range of university- and federal-level policies that have the potential to do the same for the nation. Just as in the discussion around reviving organized labor, criticisms of individual internship programs or participants obscure the very real policy issues that must first be addressed for any organizing to be truly effective.