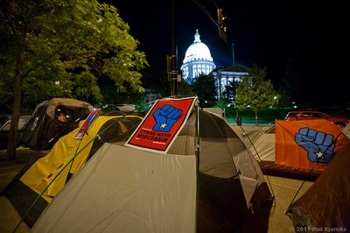 Labor and community groups are calling a “state of emergency” in Wisconsin, and holding a march at noon in Madison today (June 13) specifically targeting the Wisconsin Manufacturers and Commerce (WMC) business lobby group, which many say is a driving force behind Gov. Scott Walker’s draconian efforts to gut union rights, privatize services, roll back environmental and consumer protections and other measures.

The march will start in Walkerville, an allusion to the Hoovervilles of the Great Depression, as Mike Elk described last week. It ends at the WMC’s downtown headquarters.

The WMC’s website lauds the 2010 election of Walker and other pro-business legislators as a victory that will do away with cumbersome government regulations. The WMC noted that 53 of 61 legislators they supported won seats, part of the takeover of the state legislature by Republicans. In a dispatch shortly after the 2010 election, the WMC called for “fiscal restraint, regulatory and legal reform,” saying:

These new legislators have first-hand experience with unnecessary government regulation and know how taxes drive investment decisions. They are going to be strong and effective allies for our policy agenda in the next legislature.

The lobby’s website also includes action alerts around the attempts to recall Walker and state legislators. And it showcases the lobby’s TV and radio ads, including for the April state Supreme Court race widely seen as a referendum on Walker’s politics.

The WMC’s ad attacks liberal candidate JoAnne Kloppenburg for being “weak on criminals.” Its ad supporting David Prosser, the ultimate winner, mocks footage of the pro-union protests by saying “look past the noise” and saying working Wisconsin families have other real issues, though other than a reference to crime it’s not clear what these issues are or how the business lobby’s agenda would address them.

A press release from labor and community groups about the march says:

Wisconsin Manufacturers and Commerce (WMC) is Wisconsin’s largest and most powerful business lobby group. More than almost any other entity, they have been the driving force behind Governor Walker’s devastating two year budget, which provides hundreds of millions of dollars in tax giveaways to the wealthy while cutting millions from education, health care, social services, and environmental protection.

Walker has been clear about his pro-business agenda, declaring the state “open for business” and even personally putting signs with this proclamation near the state’s borders. In one of his first acts he gutted a landmark regulatory effort that would have facilitated clean wind energy development and likely created wind-related manufacturing jobs. It turned out the real estate lobby was a major force behind this move.

The WMC bills the 2010 election as a victory for small businesses. But not all small businesses or business leaders are on board with Walker. The Wisconsin Positive Business Alliance’s website says:

Past generations of Wisconsin business leaders invested in an economic model that valued the contributions of workers, cared for working families, and was concerned about human health. Our current generation of business leaders has emphasized concepts of ecological sustainability, clean technology, and fair trade pricing.

Yet today Wisconsin faces efforts to take our economy in the opposite direction. Some who claim to speak for Wisconsin business are working to dismantle public services, undermine public schools and colleges, block ecological technologies, and ending a century of labor peace.

These attacks—on the ability of regular people to pay their bills, receive quality housing and health care, get to work, obtain education and childcare, and enjoy a high quality of life—not only hurt our friends, families, and neighbors, but also threaten Wisconsin’s business climate.

One of the alliance’s campaigns is opposing a measure in the proposed state budget that would make it extremely difficult for small breweries to obtain wholesale distribution. The measure is supported by Miller and Coors.