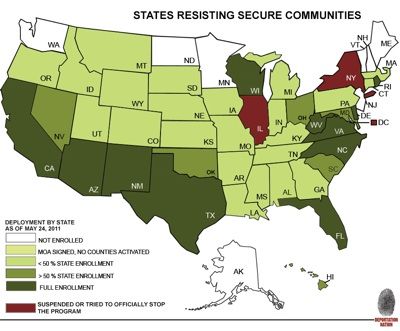 After a day of rumors that New York state may pull out of Pres. Obama’s flagship immigration enforcement program, Gov. Andrew Cuomo made it official this afternoon.

“There are concerns about the implementation of [Secure Communities] as well as its impact on families, immigrant communities and law enforcement in New York,” Cuomo said in a press release. “As a result, New York is suspending its participation in the program.”

Cuomo also sent a letter to Immigration and Customs Enforcement (ICE), alerting them of the suspension. It noted his administration had “received numerous complaints and questions about the purpose and implementation” of the program and said the “greatest concern is that instead of targeting dangerous criminals it is “compromising public safety by deterring witnesses to crime and others from working with law enforcement.”

Thirty-five counties in New York joined the program when New York quietly opted-in last May. Now they will no longer automatically allow ICE to access fingerprint and other arrest data from their local jails. New York City and the rest of the state’s 62 counties have yet to participate in Secure Communities.

Just last December, NYPD Police Commissioner Raymond Kelly raised his concerns with the program. “We want people to feel free to contact the police, to walk into police stations; communicate with the police. To the extent that [Secure Communities] may have some effect on that, that’s problematic.”

The move could be a major blow to ICE’s plan to implement Secure Communities nationwide by next year, a spread that some New York lawmakers said they hope to stop. Congressmember Nydia Velásquez (D-NY) said Cuomo had, “done the right thing. I look forward to working with him to address this issue at the national level.”

New York is the third jurisdiction to stop Secure Communities after it was activated. It joins Washington, D.C. and Illinois. Two states – Washington and Minnesota – have declined to join the program.

The Congressional Hispanic Caucus has asked Obama to freeze the program while a federal investigation is pending. ICE Inspector General Charles Edwards said he is planning a review “to determine the extent to which ICE uses the program to identify and remove dangerous criminal aliens from the United States.”

Since 2008 Congress has spent millions for Secure Communities to target dangerous “criminal aliens.” Deportations are at a record high, but most of those removed are innocent or low-level offenders who have served their time.

This article was originally published on Deportation Nation.