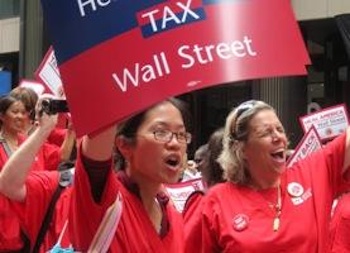 Hundreds of nurses and their allies rallied on Wall Street Wednesday to remind the bankers they owe the nation, and the union movement is determined to collect.

“This shared sacrifice stuff is a bunch of hooey. They haven’t given a thing,” said Deb Burger, co-president of National Nurses United, which led the protest. “People are suffering in their homes, in isolation. It is not your fault.”

The action took place as unions in 40 nations rallied in support of a tax on trading stocks, bonds, and derivatives. The tax—already in place in Great Britain and parts of Asia—is an attempt to slow down the tremendous churn in the financial markets by putting a meter on the Wall Street casino.

A small fee per trade could generate up to $350 billion a year in the U.S., NNU says, which could save 1.75 million homeowners from foreclosure.

While the nurses sang and danced between the speeches, the rally wasn’t exactly a lighthearted affair.

The bankers should be happy that unions are calling for a transaction tax “because some us would like them to make restitution,” said Jean Ross, a Minnesota nurse and NNU co-president.

“They should be locked up,” said Selena Hodge, a bloodbank technician at Temple University Hospital in Philadelphia, who weathered a month-long strike last year to preserve her union. Still, her health insurance is now five times as expensive—$100 a week for family coverage.

“We’re paying the price for something we didn’t create,” said Shawn Kramer, a telemetry nurse from Tampa, Florida, who won his union six months ago. “These companies speak dollars and cents, not compassion.”

Larry Hanley, president of the Amalgamated Transit Union, connected the struggle to rein in Wall Street to the attack on unions everywhere. Corporations still win big, he said, and stick working people with the bill.

“We’ve heard that our wages, pensions, and health care are unsustainable,” said Hanley. “Their tax cuts are what’s unsustainable.”

“It’s embarrassing that we have to be out here asking for basic needs in a country as rich as ours,” said Bonnie Nesbit, a Michigan Nurses vice president and endoscopy nurse in western Michigan.

People understand that Wall Street is the “fulcrum point,” she said, and that the rich must pay a bigger share—themes echoed in the large union-backed May 12 march on Wall Street and in SEIU’s emergent Fight for a Fair Economy.

As unions begin to realize their allies aren’t in boardrooms or statehouse corridors, DeMoro said, they could make a powerful statement by moving out of D.C. and standing apart from its “hub of corruption.”

Churning in the Wake

The pain left in the wake of the Great Recession turns up every day in the country’s hospitals, and the nurses responsible for cleaning up the mess can barely conceal their anger.

Neonatal intensive care nurse Sandy Falwell told the crowd about a one-pound baby she cared for, born premature because her mother’s diabetes was not controlled. The mother explained she couldn’t afford insurance for the insulin necessary for a successful pregnancy. “And now I’ve probably killed my baby,” the mother told Falwell, who works at Children’s Hospital in D.C.

“We need help, and we need to put the blame where it belongs,” Falwell said, “and that’s on Wall Street.”

“The difference between the high and low is more and more pronounced,” she said.

The rich schedule elective surgeries while the poor reappear every few weeks for preventable problems they can’t manage.

“We patch them up and give them a safe place to stay for a day,” she said. “Then it’s back into the streets, or in their car.”

Burger said a fellow nurse who distributes food to the homeless has seen the number of clients triple, from 100 to 300.

The elderly especially are skipping drugs or cutting pills in half, said Linda Condon, another Taunton nurse.

“They call it noncompliance but we know it’s because they can’t afford to take care of themselves,” Fitts said.

Nurses from all over the country brought their anger to Wall Street.

“They got us into this mess,” Condon said. “It’s time to solve the problem where it started.”