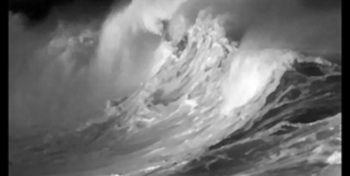 The infernal origins of Vulcano Island are easy to pinpoint. Step off the hydrofoil from Sicily and the rotten-egg smell of hydrogen sulphide strikes you immediately. Beside the quay, there are piles of yellow sulphurous rocks and chunks of pumice; the beach is made of thick, black volcanic sand; while the huge caldera that dominates the bay emits a constant stream of smoke and steam.

According to legend, this was the lair of the Roman god of fire, Vulcan, who gave his name to the island and subsequently to all other volcanoes. An early eruption here also provided history with one of the first recorded descriptions of a volcano in action.

But Vulcano’s importance today has nothing to do with the rock and lava it has spewed out for millennia. It is the volcano’s output of invisible carbon dioxide – about 10 tonnes a day – that now interests scientists. They have found that the gas is bubbling through underground vents and is making the island’s coastal waters more and more acidic. The consequences for sea life are grim with dozens of species having been eliminated.

That discovery is highly revealing, and worrying, because Vulcano’s afflictions are being repeated today on a global scale, in every ocean on the planet – not from volcanic sources but from the industrial plants, power stations, cars and planes that are pumping out growing amounts of carbon dioxide and which are making our seas increasingly acidic. Millions of marine species are now threatened with extinction; fisheries face eradication; while reefs that protect coastal areas are starting to erode.

“Some of the billions of tonnes of carbon dioxide we emit each year lingers in the atmosphere and causes it to heat up, driving global warming. But about 30% of that gas is absorbed by the oceans where it turns to carbonic acid. It is beginning to kill off coral reefs and shellfish beds and threaten stocks of fish. Very little can live in water that gets too acidic.”

Hence science’s renewed interest in Vulcano. Its carbon dioxide springs – which bubble up like burst water mains below the shallow seabed – provide researchers with a natural laboratory for testing the global impact of ocean acidification. “These vents and the carbonic acid they generate tell us a great deal about how carbon dioxide is going to affect the oceans and marine life this century,” said Hall-Spencer. “And we should be worried. This problem is a train coming straight at us.”

Scientists estimate that oceans absorb around a million tonnes of carbon dioxide every hour and our seas are 30% more acidic than they were last century. This increased acidity plays havoc with levels of calcium carbonate, which forms the shells and skeletons of many sea creatures, and also disrupts reproductive activity.

Among the warning signs recently noted have been the failures of commercial oyster and other shellfish beds on the Pacific coasts of the US and Canada. In addition, coral reefs – already bleached by rising global temperatures – have suffered calamitous disintegration in many regions. And at the poles and high latitudes, where the impact of ocean acidification is particularly serious, tiny shellfish called pteropods – the basic foodstuff of fish, whales and seabirds in those regions – have suffered noticeable drops in numbers. In each case, ocean acidification is thought to be involved.

The problem was recently highlighted by the head of the US National Oceanic and Atmospheric Administration, Dr Jane Lubchenco. She described ocean acidification as global warming’s “equally evil twin”. It is a powerful comparison, though it is clear that of the two, the crisis facing our seas has received far less attention. The last UN climate assessment report was more than 400 pages long but had only two pages on ocean acidification – mainly because studies of the phenomenon are less well advanced than meteorological and atmospheric research in general.

The workshop, held last week on Vulcano, is part of the campaign to understand the likely impact of ocean acidification. Dozens of young oceanographers, geologists and ecologists gathered for the meeting run by the Mediterranean Sea Acidification (MedSeA) programme. Dr Maoz Fine, of Bar-Ilan University in Israel, reported work on coral reef organisms that had been exposed to waters of different levels of acidity, temperature and light in his laboratory.

“We found that species of coral reef respond differently to rising carbon dioxide levels,” he said. “Bigger corals suffer but survive while smaller, branching varieties become less able to fight disease and die off. That sort of thing just makes it even more difficult to predict exactly what is going to happen to our oceans.”

Few scientists doubt that the impact on reefs will be anything short of devastating, however. The Caribbean has already lost about 80% of its coral reefs to bleaching caused by rising temperatures and by overfishing which removes species that normally aid coral growth. Acidification threatens to do the same for the rest of the world’s coral reefs.

“By the middle of the century there will probably be only a few pockets – in the North Sea and the Pacific. Millions of species of fish, shellfish and micro-organisms will be wiped out,” said Fine.

Acidification has affected the oceans in the past. However, these prehistoric events occurred at a far slower rate, said Dr Jerry Blackford of Plymouth Marine Laboratory. “The waters of the world take around 500 years to circulate the globe,” he said. “If carbon dioxide was rising slowly, in terms of thousands of years, natural factors could then compensate. Sediments could buffer the carbonic acid, for example.”

But levels of carbon dioxide are rising much faster today. By the end of the century, surface seawater will be 150% more acidic than it was in 1800. “There is simply not enough time for buffering to come into effect and lessen the impact,” said Blackford. “The result will be significant acid build-up in the upper parts of the oceans which, of course, are the parts that are of greatest importance to humans.”

A vision of the seas we are now creating can be seen at Vulcano. On the eastern side of its main bay, beyond an open-air thermal spa filled with elderly bathers wallowing in volcanically heated mud, there is a long stretch of black sand.

Just offshore, in about four feet of water, silver beads of carbon dioxide stream up from stones that lie over an underground vent. The water, although cold, looks like a huge, frothing Jacuzzi. Water here is highly acidic and there is no marine life around the vent – not even seaweed.

“The acidity here is far greater than even the worst ocean scenario for 2100, so we have to be careful about making comparisons,” said Dr Marco Milazzo, of Palermo University. “However, currents carry that acid water round the bay and it becomes more and more dilute. We can then study waters which reflect the kind of acidity we are likely to get at the end of the century.”

Milazzo and his colleagues have placed open boxes containing coral and other forms of marine life in the waters round the bay and monitor the effects of the different levels of acidity in the sea water on these samples and also on the bay’s natural marine life. “When I look one way, out to sea, where there is little acidity, the plant life is rich in reds, whites, greens and other colours. There is abundance and variety in the habitat,” said Milazzo.

“However, when I look the other way – back towards the carbon dioxide vent – that habitat gets less and less varied as the water gets more acidic. It is reduced to a dark brown bloom of macro-algae. There is no richness or variety here. In effect I am looking at the oceans of tomorrow. It is profoundly depressing.”

Acidity is measured by its pH (power of hydrogen) value. Fresh water has a pH reading of 7. Readings below that are considered to be acidic. Those above 7 are alkaline. Surface sea water had a reading of 8.2 a century ago. Today it has dropped to 8.1 because so much carbon dioxide has been absorbed by the world’s oceans. That may seem a small amount but the pH scale is logarithmic which means that 0.1 difference actually represents an increase in acidity of 30%. By the end of the century, the pH of surface sea water could have dropped to 7.8, which represents a decrease in alkalinity – or an increase in acidity, depending on your viewpoint – of around 150%.