(Scene: An elevator, downstage right. Stuck inside are ROY COHN and ETHEL ROSENBERG, characters in Tony Kushner’s landmark play, Angels in America. McCarthyite lawyer, ROY prosecuted Julius and Ethel Rosenberg, who were accused of spying for the U.S.S.R. and executed in 1953. ETHEL now paces impatiently, pushing elevator buttons. Above the stage, captions from recent New York Times headlines wink on and off didactically:) 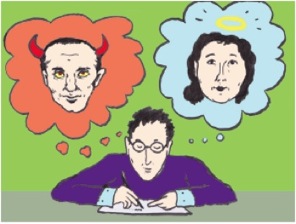 ETHEL: So Tony, you want to tell us why you’re writing this corny elevator skit? You thought maybe, “Ethel Rosenberg and Roy Cohn, trapped — how amusing”? This is a fakakta idea, Tony.

(Lights, upstage left, where Tony Kushner is at his desk, his back to us.)

ROY: Let the boy alone, Ethel. Don’t you see he’s got conflicts? You go back and help Julius assemble tractors in the dustbin of history.

ETHEL: Conflicts, Tony? You want I should advise you on the conflicts you probably got about that fancy new degree they’re giving you at the City University of New York? The one you almost didn’t get because Mr. Jeffrey S. Wiesenfeld of the board pointed out you criticized Israel? (Tony crumples a page, tosses it over his shoulder.)

ROY: Shut up, Ethel. It’s good to stop Tony from dumping on Israel, so he can keep getting awards. That’s great for me — I’m a bigger guy in Hell since they showed reruns of that Angels play of his on HBO.

ETHEL: Such nice goyishe actors they got to play us, Roy. But we must ask: Why did Tony criticize Israel? Tony is a good boy. Tony does not exploit the masses. He criticized because he saw the Palestinians denied their rights and in pain. So Tony gets another degree, but inside he knows there are dialectically historical conditions that must be analyzed.

ROY: Thank you, Ethel, for validating my work in sending you to the electric chair. You were much less repulsive when you stole secrets of the A-bomb. Tony, I’m guessing you put me here to talk sense. So don’t listen to this pinko puke. You got a good life — awards, honorary degrees. The people love Tony Kushner, “dramatist of empathy”!

ETHEL: Which is why Tony, as a feeling person, said that what was done to the Palestinian people when Israel was created was “ethnic cleansing.” This is where Tony’s analysis must continue— 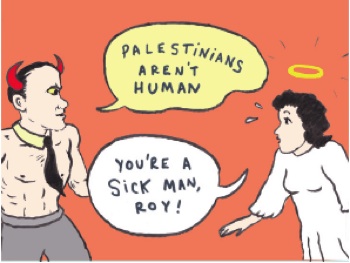 ROY: Tony made a little mistake about the Palestinians. There weren’t any. He assumed the native riffraff around in 1948 had feelings. Typical liberal moral-equivalence fallacy.

ETHEL: But this Mr. Wiesenfeld says Tony’s an “extremist.” He says his mother would have called Tony a “Nazi collaborator.” (Tony snaps a pencil in two.) This is enough to alienate Tony from his means of production, Roy. (Tony puts his head in his hands.)

ROY: (Pointing to Tony) Now, look what you did. Christ, Ethel, NEVER remind Tony about those guys who call you a Nazi if you disagree with them. They can be scary.

ETHEL: Yeah. Like you were, when you called people reds in the 1950s.

ROY: Tony, if you’re going to force me to deal with this Bolshevik broad, I demand you write me with a cigar and some booze. (Pause. ROY reaches into his coat pocket and fishes out a lit cigar and a glass of bourbon.) Thanks.

ETHEL: Speaking of ethnic cleansing, Tony, did you read in the papers what happened when those Palestinian protestors tried to remember the founding of Israel? How many Palestinians you think could be writing award-winning plays if they weren’t being shot by the IDF?

ROY: Tony, relax. It’s all good. Remember how your liberal supporters came through for you? Then you tell your detractors you always believed in Israel’s right to exist — Fantastic! And, in case anyone notices you’re on the board of Jewish Voice for Peace, you say you’re against the boycott — Nice save! It’s like a built-in loyalty oath: “I am not now, nor have I ever been, a critic of Israel.”

ETHEL: So Palestinians are supposed to stop suffering until Tony Kushner gets his honorary degree? All through this media mishegas, nobody talks about Palestinians —

ROY: Wrong! Wiesenfeld tells Jim Dwyer of the New York Times that Palestinians “worship death for their children” and “are not human.” So the liberals, in order to get the award back for Tony, have to act like Palestine doesn’t exist — which ain’t hard, ’cause it don’t. After all, the whole point of the campaign, is to defend Tony, not to help Palestinians, right? 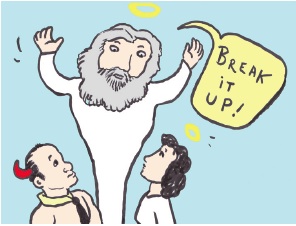 ETHEL: Not for the Palestinians. Tony, you write about them! Put, for instance, a Palestinian in this script. You call yourself a socialist? You stand up, Mr. Socialist Writer!

ROY: World’s a stage, Ethel. People love to play “commie,” put on the T-shirts. Don’t mean anybody’s a goddamn radical about anything. It’s all show biz.

(Tony stands up, kicks over a wastebasket. Ethel crosses to ROY and pours the bourbon over his head. ROY chokes Ethel. Suddenly, the stage shakes, and an ANGEL, played by KARL MARX, crashes through the backdrop and hovers over the stage. He speaks with the voice of a bored elevator operator.)

(Actors playing ROY AND ETHEL shrug, step out of the elevator, and head back to the dressing room. Tony sighs, turns off his computer, and wanders off. Lights out.)

This article was originally published on MRZine.org.