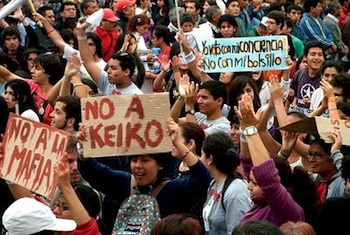 When Peruvian presidential candidate Keiko Fujimori arrived at a plaza in the city of Cajamarca for a recent campaign speech, she was met by a barrage of eggs thrown by activists who opposed her candidacy and called her a “murderer and thief.”

The activists were referring to the legacy of her father, Alberto Fujimori, who was Peru’s president from 1990-2000 and jailed in 2007 for a quarter century sentence after being found guilty of corruption and ‘crimes against humanity’.

A mock national vote one week before the upcoming June 5 election showed a tight race, with Fujimori leading her only opponent, left-leaning Ollanta Humala, by a single percentage point. For many voters, the election is not just about politics and economics – it’s a battle over memory and justice.

Despite her support at the polls, many human rights activists in Peru believe the younger Fujimori signals the resurgence of her father’s dictatorial policies, which involved torture, murder, rape, and the disappearance of thousands of Peruvians in the midst of a conflict involving the Shining Path guerrilla movement.

In reference to this conflict, Amnesty International stated “the widespread and systematic nature of human rights violations committed during the government of former head of state Alberto Fujimori (1990–2000) in Peru constitute crimes against humanity under international law.”

On top of that, Fujimori’s administration waged a sterilization campaign against poor, indigenous and rural women from 1996 to 2000. As a result, some 200,000 women in rural and marginalized urban communities were sterilized without their consent.

Jonathan Cadenas Grau, a political analyst in Lima, Peru’s capital, said in a phone interview that while Keiko’s father has been legally convicted of crimes against humanity, she doesn’t recognize them as such. “[Despite the fact that] he certainly used terror to govern… She never says ‘crimes’, she says ‘errors’ or ‘mistakes’,” he said. “Now she’s always talking about her father, saying he was the best president we ever had.”

And the support of her father’s rule goes much deeper than discourse. After the elder Fujimori removed his wife from the First Lady’s seat, she was replaced with Keiko. Years later, in her election campaign, Fujimori is surrounding herself with her father’s advisers – the same ones who supported his ‘crimes against humanity’.

On Thursday, May 26, thousands of people took to the streets in Lima, to march against Keiko Fujimori, and the political Fujimorismo that she embodies. “Keiko Fujimori represents the worst period in our history,” Silva Santisteban, a human right leader participating in the march, told La Republica newspaper. “We don’t want this dark period of our history to return and that’s why we’re in the streets.”

The activists were mobilizing largely under the banner of The National Coordinator of Human Rights and the “Fujimori Never Again” Collective, which brings together some 79 social and activist organizations. With their cheers and placards, they urged voters to not cast ballots for Fujimori in the upcoming elections.

Activists organized various actions and marches across the nation in tandem with the mobilization in Lima. Over one hundred Peruvian writers signed a letter against the “resurrection of Fujimorismo”, stating that the “biggest triumph of Peruvian democracy was the rejection of this dictator.”

Yet in 2008, Keiko famously said that after being elected president, her “hand would not tremble” if she signed a pardon for her father. While she has backed off from the position since then, recognizing that a pardon would be unconstitutional, it is clear that she’ll do what she can to help her father.

“There is no doubt that she would encourage judicial powers to end the sentence or give him home detention, citing his age or sickness – he has tongue cancer,” Hector Bejal, a Peruvian lawyer and member of Global Call to Action Against Poverty, explained in a phone interview.

Cardenas Grau added that while freeing her father “would be extremely un-populist”, he is sure that if Fujimori wins, she’ll “make his stay very comfortable, at the least.”

Despite the allegations of corruption, Fujimori is receiving support in preliminary polls for the upcoming June 5 election, but the sharply divided polls and potential dictatorial holdover is already bringing people’s political action outside the ballot boxes and into the streets.

After the elections, no matter the outcome, the stigma surrounding the elder Fujimori will continue to motivate people to act on their own sense of power. “Whoever wins, I don’t think Peruvians are going to let them pervert democracy… I think we are going to have to force their hand to maintain democracy, and there is no other way for many of us now,” said Cardenas Grau. “I see protests in the streets. They are already happening.”

Benjamin Dangl is the author of the new book Dancing with Dynamite: Social Movements and States in Latin America (AK Press). He edits TowardFreedom.com, a progressive perspective on world events, and UpsideDownWorld.org, a website on activism and politics in Latin America. Email Bendangl(at)gmail(dot)com

Jesse Strauss is an independent journalist, born and raised in Oakland. Reach him at jstrauss(at)riseup(dot)net.