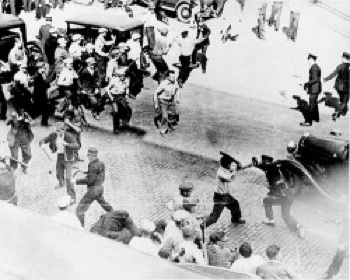 During the 1950s, American workers went on strike an average of 350 times each year. In the past decade, the average number of strikes each year fell to 20. In his new book Reviving the Strike: How Working People Can Regain Power and Transform America, veteran union negotiator and Working In These Times Contributor Joe Burns argues that grinding industries to a halt is the last, best hope for workers and their unions. Visit this site each Monday in June for exclusive excerpts from the book. —Working In These Times Editor Jeremy Gantz

The 1930s showed, most dramatically, that the basis of union power was an assertion of control over the workplace in order to halt production until worker demands were met. As described in the labor relations textbook titled “The Practice of Collective Bargaining,” a strike “denies the employer the use of a productive plant until it is ransomed by a satisfactory settlement.” In basic industries during the 1930s, the backbone of resistance to industrial unionism was broken by the heroic actions of trade unionists resisting employers, courts and even the government.

In many ways, the tactics of the 1930s were developed to fight against exactly the same problems facing trade unions today, namely an employer determined to continue production, with no shortage of scabs to take strikers’ jobs. If one believes that the unions of the 1930s were justified in stopping production, then there is no basis to say that today’s labor movement is not equally justified in utilizing similar tactics.

The other great lesson of the 1930s was the power of solidarity. For example, the 1934 truckers strike in the Twin Cities involved all truck drivers in the city striking at once, encompassing dozens of employers. In contrast, how would the same strike have played out under today’s system of labor control?

Assuming the workers were brave enough to strike at a given company, the union would have to put up picket lines at the individual companies and then most likely watch scabs stream in to take their union jobs. Needless to say, if the Teamsters of the 1930s had used today’s tactics, they would have lost the battle to unionize the industry. Fortunately, to the great benefit of generations of truck drivers and their families, the Twin Cities Teamsters of 1934 played by labor’s rules, not management’s.

One can go industry-by-industry and see how the trade unionists of the 1930s developed effective tactics for stopping production. It is also important to realize that these tactics were not confined to left-wing unionists. Sometimes, by focusing on the major battles such as the 1934 Teamsters strike, the giant confrontations in rail in the 1800s, or the important battles led by the Industrial Workers of the World (IWW), labor activists lose sight of how important stopping production was to even moderate or conservative trade unionists of the past.

While the contemporary labor movement flounders for strategies to move forward, it ignores the clear answers from history at its own peril. Today, management has constructed a system of labor control that has contorted the strike, once an instrument of human freedom and dignity, into a free market perversion.

To be clear, unionists cannot simply import traditional union tactics into today’s world, as much has changed since the 1930s: workers are no longer concentrated in dense urban centers, the labor left in this country is weak, and unionists face a transformed economy dominated by massive global corporations.

From REVIVING THE STRIKE: How Working People Can Regain Power and Transform America by Joe Burns. Copyright (c) 2011 by Joe Burns. Reprinted with permission of Ig Publishing, Inc.