During the 1950s, American workers went on strike an average of 350 times each year. In the past decade, the average number of strikes each year fell to 20. In his new book Reviving the Strike: How Working People Can Regain Power and Transform America, veteran union negotiator and Working In These Times Contributor Joe Burns argues that grinding industries to a halt is the last, best hope for workers and their unions. Visit this site each Monday in June for exclusive excerpts from the book. Previous excerpts are here and here and here. —Working In These Times Editor Jeremy Gantz 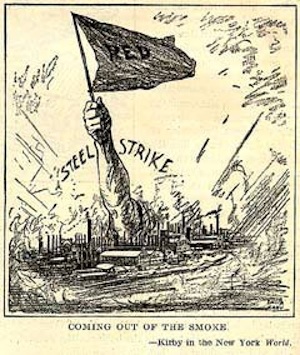 After watching the labor movement—and the strike—wither over the past 30 years, trade unionists today need to answer several big questions if they wish to revitalize unions in this country. How should the labor movement deal with the current system of labor control? How should human labor be treated in relationship to capital? How can workers act as a class to advance their common interests? What are the best forms of organization to carry on the fight for workers’ rights? And finally, what is the role of the strike?  The answers—or non-answers—to these fundamental questions will shape labor’s future in America.

To point the labor movement in a new direction will require more than fostering discussion, however; it will require a large group of people willing to challenge the status quo, people who have the ideas, organizational skills and self-confidence to give voice to a workers’ movement capable of transforming America.

This will have to start with the activists in the movement—shop floor militants, progressive union staffers and officers, worker centers’ activists, and friendly academics. However, the debate over the future of trade unionism must grow beyond this committed, but small group if the there is to be a true labor revival in this country.

So how does one build such a trend? Again, we can learn from labor history. In the 1920s and early 1930s, the labor movement was stuck in a narrow form of craft unionism that was unable to win gains from employers. Craft unionists viewed only skilled workers as deserving of union representation, and they rejected attempts to organize all workers into one union.

However, a countercurrent developed which argued that industrial unionism was the road forward for the labor movement. This trend toward industrial unionism was driven by the political left of the era (socialists, anarchists and communists), who had a program that, although varying in its approaches, shared one guiding principle: the strength of the overall trade union movement.

This trend toward industrial unionism did not spring out of thin air, however, as these left-wing groups had spent the first several decades of the 20th century agitating—both inside and outside of the labor movement—for their aims. On the outside, the Industrial Workers of the World had strongly supported industrial unionism in both deed and action, while within the American Federation of Labor (AFL), William Z. Foster and John Kirkpatrick of the Chicago Federation of Labor had organized the great 1919 nationwide steel strike. No matter the battle or the union, the idea behind it was always the same for these industrial trade unionists—one employer, one union.

Eventually, the years of agitation paid off as the idea of industrial unionism gained popularity, first at a grassroots level, and then broadly within the entire working class. Thus, when the economic crisis of the 1930s hit, workers were ready to embrace a new form of unionism. In “Heroes of Unwritten Story,” Henry Kraus, the editor of an early autoworkers’ newsletter, recounts how workers in the 1930s rejected the narrow AFL craft unionism and fought to establish industrial organization.

Kraus talks about how he was sitting in a local autoworker’s union office shortly after the great sit-down strike at General Motors when a delegation of six workers from a sausage pickling plant came in. After determining where they worked, Kraus tried to direct the workers to an AFL craft union. Despite the fact that 500 of their fellow workers were sitting down at the plant to demand union recognition, these workers vehemently rejected the AFL, snarling “we don’t want no truck with the AFL.”

The task today is to build such a broad-based understanding within the labor movement of the need to change the present system.

How can this be done? During the decades-long push to establish industrial unionism in the first half of the twentieth century, industrial union activists repeatedly raised their issues at union conventions. Following their historical lead, trade unionists today could adopt the position that the system of labor control is illegitimate, and support efforts to break free from it. This could take the form of convention resolutions as a way of raising the debate within the movement. Just as it was once official AFL policy to disobey injunctions, trade unionists today could debate whether or not to comply with the different facets of the system of labor control.

No matter the issues, reviving the strike—and by extension, the labor movement—will require a single-minded focus by trade unionists. Right now, the left wing of the labor movement lacks a common agenda, as it advances a hodge-podge of ideas of what it will take to save unionism in this country. If one agrees with the analysis in this book, then the one unifying factor that can achieve the myriad goals of the labor movement is the revival of the effective, production-halting strike. This must become labor’s primary focus.

Additionally, if trade unionists ever decide to embrace a new militancy in order to smash the system of labor control, they will need the support of their union brothers and sisters. Historian Nelson Lichtenstein, in the conclusion of his influential history of the labor movement, State of the Union, lists the failure to support militancy as one of the major weaknesses of the modern labor movement. Discussing what the movement needs to succeed, Lichtenstein writes,

The first is militancy. The union movement needs more of it, but even more important, American labor as a whole needs to stand behind those exemplary instances of class combat when and if they occur. The 1980s were a tragic decade for unions, not because workers did not fight, but where labor did take a stand—at International Paper in Jay, Maine; at Phelps Dodge in Ariz.; at Hormel in Austin, Minn.; at Continental and Greyhound—their struggles were both physically isolated and ideologically devalued.

Instead of being engulfed in the solidarity of their fellow trade unionists, workers today who choose to fight back often do so on lonely picket lines, with little support from the official labor movement. Without a broad trend that promotes effective tactics, striking workers are not exposed to ideas that can help them win strikes, nor are they supported when they engage in militancy.

In the past, even during labor’s darkest hours, workers were able to reach deep down to create new methods of struggle that transformed the political landscape, methods that relied on worker militancy and solidarity, supported by an effective strike.

While the strike might seem like a relic of the past to much of the contemporary labor movement, as labor historian Peter Rachleff writes, “it would be a mistake to leap to the conclusion that strikes are on their way to the dustbin of history. As long as the capitalist economy rests on the employment and exploitation of labor, the organized withdrawal of labor is bound to remain a central expression of working class protest and power.”

From REVIVING THE STRIKE: How Working People Can Regain Power and Transform America by Joe Burns. Copyright (c) 2011 by Joe Burns. Reprinted with permission of Ig Publishing, Inc.

This piece was originally published by Working In These Times.