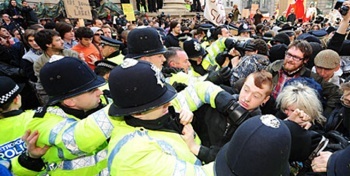 European centre-left leaders gathered recently in Oslo to discuss their difficulties in winning power, as well as their inability to do anything with it once they’ve got it.

Patrick Diamond believes that recent local electoral success “cannot disguise the governing crisis which threatens Labour’s very survival as a party of power.” He should know. He was one of the author’s of the British Labour Party’s last election manifesto. This ‘crisis’ is not confined to Britain, however.

Centre-left parties hold office in Norway, Greece, Spain and Portugal, but only in the first of these do their policies bear any resemblance to social democracy, the political philosophy behind the movement which brought us the welfare state, low rates of poverty, and a code of values based on equality, solidarity and dignity.

This may be because the Norwegian government includes a party to the left of the social democrats, or it may be because as a non-member of the EU, the country’s rulers have a bit more space to determine policies than do those of the twenty-seven countries bound hand and foot by the neoliberal Lisbon Treaty.

A recent poll conducted in the US, Britain, Germany and Sweden found that the vast majority of people in those countries do not believe that governments can stand up to vested interests, while sizeable minorities – almost three in ten in Britain –  are sceptical of any possibility that governments can be effective in bringing about positive social change.

This is hardly surprising, when governments of the centre-left have signally failed to reproduce anything like the achievements of social democracy of the post-war years.  This is unsurprising, given the undeniable fact that they have failed to challenge the logic of neoliberalism.

Take the financial crisis and the economic crisis which it provoked. The problem began with a US sub-prime mortgage crisis which was the result of a process of national and international deregulation of financial services which centre-left parties might have been expected to resist. After all, there is nothing particularly radical in believing that consumers, public and private, as well as honest investors, should be protected from the unscrupulous and the greedy.  Instead, nominally social democratic leaders were amongst the most enthusiastic advocates of global financial anarchy.

Once the system collapsed, governments bailed out the very institutions most culpable in bringing the crisis about. The result was that a wave of destruction caused by the private sector was magically transformed into a crisis of government debt. The people’s money was used to ensure that the people’s enemies continue to sleep off their champagne suppers under silken sheets.

In Britain, the government is not only venal and absolutely unrepresentative of the country’s people, it is also incompetent, floundering into an electoral trouncing, the junior partner staring into the abyss of total meltdown. The same is clearly true of Spain, while in Greece PASOK has failed to mount any sort of challenge to the rape of their country by the combined forces of the European Commission, the European Central Bank and the International Monetary Fund.

Of course, centre-left parties may return to government in some countries as desperate electorates look for some alternative to the kleptocrats of the right. Yet there is absolutely no sense that, when people vote against neoliberal governments, they are voting for anything at all.

When I first voted Labour, in 1974, at the age of 19, I had a clear idea that the party stood for a gradualist approach to social progress. Although it was clearly not going to lead Britain to a glorious socialist future, on an electoral level it was all we had. Blair transformed it into a fully bourgeois party with only nominal links to the working class.

This has been demonstrated by the Labour leadership’s failure to promote a social democratic response to the intensified class war unleashed in the wake of the crisis, a pattern reproduced in almost every country of Europe.

In some ways this is puzzling. Labour consistently shunned real left politics on the grounds, ostensibly, that they would not have been popular with sufficient voters. Whether this was really the case in the past or not is debatable, but it is surely the case that in the face of the crisis a programme of real reform of the financial sector would, as the global economy began to fall apart, taking people’s jobs with it, have been popular.

A Keynesian programme, including counter-cyclical investment and public ownership of banks, would have been capable of mobilising broad support. Proving to people that the state can stand up for their interests in the face of the concentrated power which is the inevitable product of deregulated markets would have had the chance of restoring faith in democracy.

There are whole areas of public life which are being undermined by cynicism, corruption and nepotism. This could be tackled by a programme of reform which could be carried out at no great expense.

The survey cited above also showed that people associate the centre-left with high taxation, but that they do not object to taxes per se. It’s just that they want value for money. Taxation to strengthen public services, education and health care has majority support.

Most people in Western Europe are, even if they don’t know it, social democrats. Survey after survey has shown that people want a strong welfare state, health care accessible to all, sound pensions and a good system of education.

For socialists to support such people is to indulge in a pessimistic nostalgia which has no real relationship to the world as it is now. Electoral politics in the context of European Union member states, hidebound as parliaments are by the Lisbon Treaty and all it represents,  can only ever be protest politics.

Movements are stirring – Spain’s indignants, UK Uncut, the Greek resistance – which promise to be far more effective than the passive strategy of putting a cross next to the name of the candidate whose party will, you hope, close down the fewest hospitals.

This is not an argument against voting. If you have real socialist parties in your country, vote for them. If you think the social democrats will at least put a barrier up to the rise of the far right, by all means vote for them. But do it without illusions – and understand that the struggle for socialism, for decency, equality, solidarity – for simple dignity – is happening somewhere else entirely.