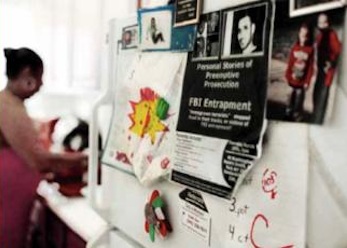 The following report was issued by The Center for Human Rights and Global Justice (CHRGJ) at New York University School of Law.

Targeted and Entrapped: Manufacturing the “Homegrown Threat” in the United States

Since September 11, 2001, the U.S. government has targeted Muslims in the United States by sending paid, untrained informants into mosques and Muslim communities. This practice has led to the prosecution of more than 200 individuals in terrorism-related cases. The government has touted these cases as successes in the so-called war against terrorism. However, in recent years, former Federal Bureau of Investigation (FBI) agents, local lawmakers, the media, the public, and community-based groups have begun questioning the legitimacy and efficacy of this practice, alleging that—in many instances—this type of policing, and the resulting prosecutions, constitute entrapment.

This Report examines three high-profile terrorism prosecutions in which government informants played a critical role in instigating and constructing the plots that were then prosecuted. In all three cases, the FBI or New York City Police Department (NYPD) sent paid informants into Muslim communities or families without any particularized suspicion of criminal activity. Informants pose a particular set of problems given they work on behalf of law enforcement but are not trained as law enforcement. Moreover, they often work for a government-conferred benefit—say, a reduction in a preexisting criminal sentence or a change in immigration status—in addition to fees for providing useful information to law enforcement, creating a dangerous incentive structure.

The government played a significant role in instigating and devising the three plots featured in this Report—plots the government then “foiled” and charged the defendants with. The defendants in these cases were all convicted and are facing prison sentences of 25 years to life. These prosecutions—and others that similarly rely on the abusive use of informants—are central to the government’s claim that the country faces a “homegrown threat” of terrorism. Serious questions have been raised about the government’s role in each of these cases, as well as around the set of laws that have facilitated these practices. They also raise fundamental human rights concerns.

Part I.A. of this Report considers four trends that have enabled the aggressive and widespread use of informants in Muslim communities: (1) the conflation of Muslims with terrorism and terrorists; (2) the U.S. government’s adoption of unsupported theories about “radicalization” and “homegrown terrorism” in American Muslim11 communities; (3) a shift toward a preventative model of policing and prosecuting terrorism, which seeks to intervene prior to any plan to commit a particular crime; and (4) the lack of accountability and transparency of law enforcement activities. Part I.B. assesses the domestic legal framework governing the use of informants in undercover investigations, including the entrapment defense. Drawing on media accounts, court documents, and interviews, Part II then examines three high-profile terrorism prosecutions, looking closely at the government’s practices in instigating and constructing the plot through informants, and the impacts the prosecutions have had on the families of the defendants. Part III evaluates the human rights impacts of the practices and policies detailed herein and the corresponding obligations of the U.S. government to respect, protect, and fulfill these human rights. Part Iv concludes with policy recommendations.

This Report is grounded in consideration of the government’s prosecutions against the “Newburgh Four” with a focus on defendant David Williams; the “Fort Dix Five” with a focus on defendants Eljvir, Dritan, and Shain Duka; and the case of Shahawar Matin Siraj. Family members of David, Eljvir, Dritan, Shain, and Shahawar were interviewed for this Report, which builds on the Center for Human Rights and Global Justice’s (CHRGJ) longstanding work documenting the impact of U.S. counterterrorism policies on Muslim, Arab, Middle Eastern, and South Asian communities. We also interviewed and consulted with experts, journalists, and community leaders studying these issues,
and drew on court documents and media accounts.

The experiences of the families who were interviewed for this Report demonstrate the profound toll government policies are taking on Muslim communities and families. Counterterrorism law-enforcement policies and practices are undermining U.S. human rights obligations to guarantee the rights to nondiscrimination; a fair trial; freedom of religion expression and opinion; as well as the right to an effective remedy when rights violations take place.

The families have been outspoken about the injustice of these tactics and the prosecutions that they have spawned. A growing chorus of commentators, community members, scholars, and policy experts, is beginning to challenge the legitimacy of the government’s practices, and the notions that these prosecutions substantiate a “homegrown threat” or provide any security- enhancing benefits.

The cases highlighted in this Report do not stand alone. A number of cases around the country have been met with similar concerns, which further suggests that the practices highlighted here are illustrative of similar law enforcement activities targeting Muslim communities around the country. As this Report argues, the U.S. government must put an end to criminalizing Muslim communities. Not only do these practices fail to enhance public safety goals, but they pose intolerable threats to basic human rights across the country.

To abide by these international human rights obligations, CHRGJ urges the U.S. government to act immediately to implement the following recommendations with respect to law enforcement and counterterrorism investigations, particularly those that involve the use of extensive surveillance and paid informants without particularized suspicion of criminal activity:

• The U.S. government should reject “radicalization” theories that threaten the rights to freedom of religion, opinion, and expression, and should put an end to the preventative policing and prosecution methods that rely on such theories.

• Congress should hold hearings on the impact of counterterrorism policies on Muslim, Arab, South Asian, and Middle Eastern communities in the United States. These hearings should include consideration of current intelligence-gathering tactics and the use of informants in counterterrorism investigations.

• Congress should pass the End Racial Profiling Act, proposed federal legislation to ban racial profiling by law enforcement.an end to criminalizing Muslim communities. Not only do these practices fail to enhance public safety goals, but they pose intolerable threats to basic human rights across the
country.

• The Department of Justice (DOJ) should revise its own June 2003 Federal Guidance on Racial Profiling to eliminate the border and national security loophole, to include a ban on profiling based on religion and ethnic origin, and to ensure that the guidance is enforceable.

• The DOJ should open an investigation into all terrorism-related cases involving the use of an informant since September 11, 2001, with a view towards examining oversight and actions of informants, the circumstances under which they are deployed, the types of information they gather, and their role in instigating terrorist plots.

• The FBI and other law enforcement agencies do not open investigations, including by using informants, against individuals absent particularized
suspicion of wrongdoing.

• The FBI and other law enforcement agencies are not allowed to target individuals and communities through surveillance, informants, or other information-gathering techniques based on race, religion, or national origin, or political and religious statements or beliefs.

• The FBI is explicitly and consistently prohibited from using informants to engage in entrapment or inducement to commit crimes.

• The NYPD should revise its guidelines to only allow for investigations when there is an articulable and reasonable suspicion of criminal activity.

This piece was originally published on Jadaliyya.com.